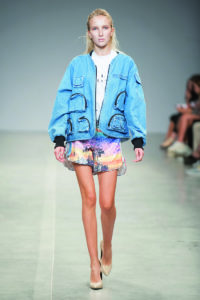 It’s great to say that Ukrainian designers are becoming more and more bold with the choice of locations for their shows. For instance, Lake Studio presented their latest collection at an uber-trendy Kyiv venue – a velodrome; its sleek and clean lines making it ideal for fashion, with guests seated along the perimeter of the track itself. The central railway station was another show stopping location for Jean Gritsfeldt. The designer had staged shows at the circus and in the airport in the past, so Kyiv Pasazhirsky was a simple nut to crack. The models strolled amidst the retro trains wearing dresses featuring old stamps as prints.

Another trend from the so called Big Four (the main fashion weeks in the world) is the presentation format, where models no longer walk along the catwalk, but rather stand or sit still. A hatmaker from Lviv, Ruslan Baginskiy (see further story on page 29) was championing this format on the first day of fashion week, as was the case for outerwear powerhouse Ienki Ienki, who invited their guests to a newly created showroom.

Out with the old and in with the new. We’d no sooner said goodbye to summer when a new showcase of Ukrainian Fashion started almost simultaneously with the first day of autumn. Fashion insiders were busy preparing for the hectic pace of fashion week straight from the relaxation of summer holidays and there was much to be impressed with this season 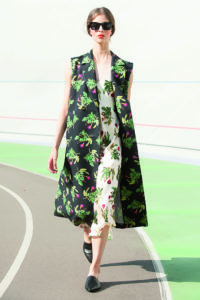 There was also social input in this season’s fashion week: five Ukrainian designers joined forces with illustrators making pieces inspired by HeForShe, a UN Women’s solidarity movement for gender equality. Among them were Ivan Frolov and Anton Belov, Svitlana Bevza and Vova Vorotniov, Artem Klimchuk and Maria Ralemska, Liliya Litkovska and Masha Shubina, plus Lake Studio and Masha Gavryliuk. The items of their collaboration exhibited in the lobby of the main UFW location – Mystetskyi Arsenal, for the whole week.

Ukrainian fashion is becoming more and more body positive as Andre Tan, one of the judges for TV show Model XL, invited curvy girls to model for his show. Pop star Olya Poliakova and a TV host Lesia Nikitiuk also modelled at the show to add even more hype!

Ukrainian queen of intellectual prints Liliya Poustovit, who usually opens the fashion week with her show, took her collection to the 24th floor of a skyscraper and showed pieces inspired by the north of France which were uniquely styled with lace. A strong admirer of urban and sustainable fashion in Ukraine – Ksenia Schnaider, showed a collection inspired by Ukrainian beaches.

All in all it was a strong season for Ukrainian fashion, clearly cementing a place on the global fashion map.