Ukrainian Sand Artist in a League of Her Own

Ukraine was part of the Soviet Union for 72 years. This era had both benefits and drawbacks, arguably more of the latter. No matter which side of the fence your opinion lies it was a country, a very strong one, and that left a legacy

The Soviet Union had its symbols, history, and most importantly, heroes. And just like in any authoritarian state, great effort was made to remember them.  This has left a legacy, strong, noticeable, and very Soviet.

Out with the Old 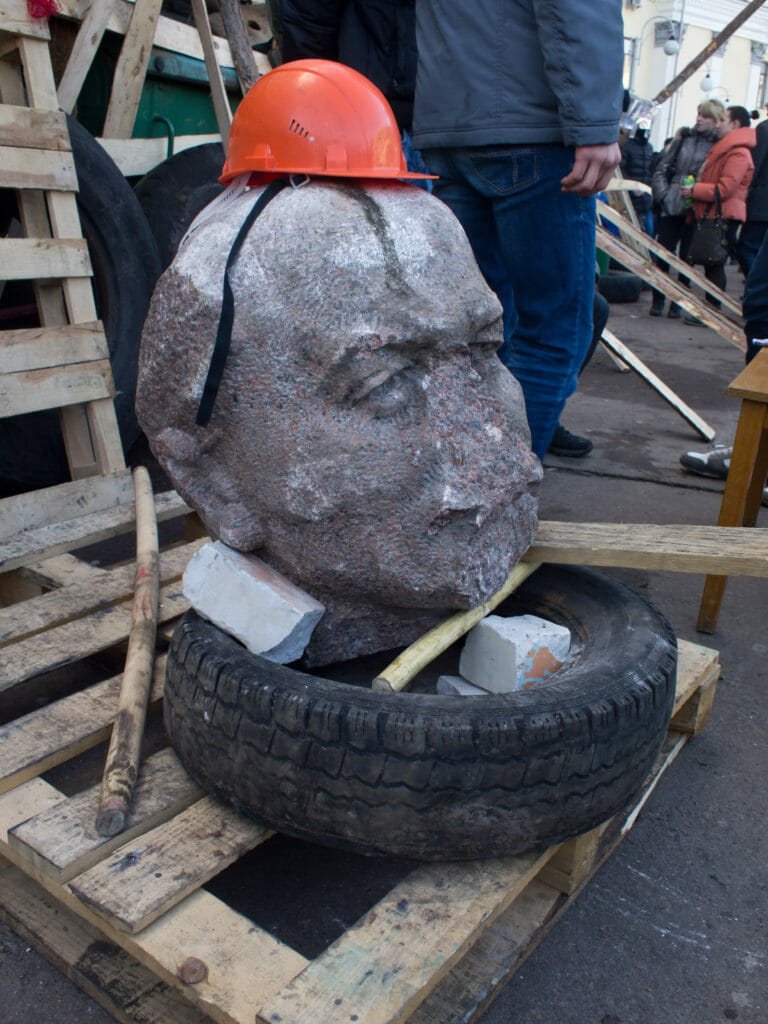 The concept of getting rid of items which are reminders of the past isn’t new. A great example is the Taras Shevchenko monument opposite the red Shevchenko University. At one time, instead of the esteemed poet, it was Tsar Nicholas I who occupied the plinth. Then, the Bolsheviks came along and de-tsarised the square.

Let’s traverse a historical movement which started in 1991, halted in 2010, and gained huge momentum in 2014: decommunisation.

It’s 1991 and Ukraine is a newly-minted country seeking to showcase its national identity. An identity which was mostly suppressed, if not banned, throughout the Soviet era. Although dismantling monuments and renaming streets was a must, first it was ebsured that the education system no longer remained archaic and outdated. Subjects which directly concerned themselves with studying Lenin, communist ideology, and the history of the communist party flew out the window. Alongside that, a gigantic monument of the October revolution – a prime example of visual pollution – was removed. In fact, it was one of the first casualties. Sadly, at that time, there weren’t many strict laws on decommunisation and so much of the past was to stay. Until…

…then-president Viktor Yushchenko in 2009 set out stricter rules on what was to go. Some people were so excited to enforce these rules that they “brutally and ruthlessly vandalised” the now non-existent Lenin monument in the centre of Kyiv. The great leader, a reminder of communism in granite, lost some of his nose and arm in the fracas. He would be toppled completely five years later. Fast forward.

It’s 8 December and the Euromaidan revolution is gaining momentum. There’s a news alert: “Masked protesters are planning to bring the Lenin monument down.” Cue the 200 or so masked activists at the monument who attach cables and ropes to what’s left of the Soviet force. The Berkut (riot police) stand by and do nothing to intervene. The statue starts swaying. Then… Boom! The Lenin effigy collapses on its back, breaking the granite paving stones below. The crowd rushes in with hammers to finish the job. Every blow is revenge: for the famine, for the murders, for the past. All this in the course of just a few hours.

This one event sparked a chain reaction of Lenins toppling across Ukraine. A whopping 504 monuments would fall all across the country over the next few months. Just five years on only 20 remain. This resulted in some spaces bereft of a centrepiece. The one in central Kyiv has been used for installations, some more successful than others (a prime example being a toilet painted gold in memory of a ‘legitimate’ president.)

But as with everything controversial, a great deal of opposition came from the ‘legitimate’ government. Then Prime Minister Mykola Azarov labelled the act vandalism and Petro Symonenko, leader of the supposedly banned Communist party, was vocal in his criticism.

Leninopad (a play on words from Ukrainian пад – pad, which means something falling) was happening at the will of the people so no one gave two damns about the government, regardless of whether it was legitimate. The police didn’t exactly oppose it either. One of the reports said: “Because the monument has the value of 0 UAH and represents no cultural heritage, its vandalism is fully legal and can’t be prosecuted.”

Obviously, there was more to this than just Leninopad. The movement represented a whole legal process with major implications, such as the city of Dnipropetrovsk and Kirovohrad being renamed Dnipro and Kropyvnytskyi, respectively. The first change was due to Grigory Petrovsky being implicated in the 1933 famine and the second because Sergei Kirov’s murder sparked the red terror.

The Dispute of Decommunisation

The significance of decommunisation is disputed. That should come as no surprise. Not enough time has passed to evaluate its implications without bias. Many argue it is necessary to remember the past, but there are museums that do that job. According to Volodymyr Viatrovych (the former head of the Institute of National Memory), the next step should be decolonisation. Ukraine must distance itself as far from Russia as possible. “Russia is using their shared past to strengthen its influence on Ukraine,” says Vatrovich. It is nothing more than colonial thinking and moves are being made to support the push-back.

A giant leap was granting the Ukrainian church autocephaly. Another was the language law – one of Petro Poroshenko’s last moves as president. While no one knows for sure what the current president’s tactic will be, some think there’s hope. In light of recent events, however, that hope is quickly diminishing. The recent news about the Steinmeier formula doesn’t seem to be the most promising on the decolonisation front.