While walking the streets of old Kiev, you’ve probably passed by house number 33 on Olesya Honchara street.  This building with it’s somewhat art deco style, is hard to miss. It’s facade is characterised by its asymmetry, saturation of ornate forms, elements of flora and fauna, ornaments and symbols, and a play of textures of various building materials.

It was built in 1907 as a residential building and clinic of P. Kachkovsky by architect G. Ledokhovsky and sculptor F. Sokolov.  From 1910, it belonged to the family of doctor S. Makovsky, who opened a surgical hospital on site which was equipped with the latest achievements in medical science and technology.  On September 1, 1911, the wounded Prime Minister P. Stolypin was treated here after an attempt was made on his life in the city theater. During the First World War, the Makovsky hospital housed the officers’ hospital of the Volyn nobility.

The mansion was damaged in the fall of 1943 during the Second World War and was rebuilt in 1948. 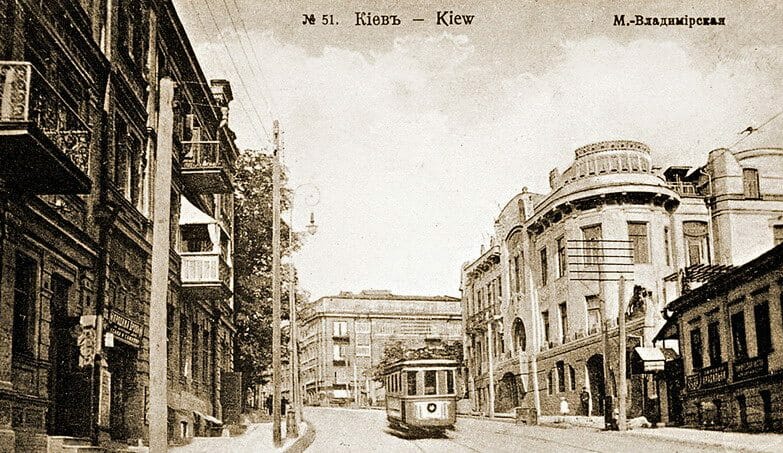 In 1998 the house became the headquarters of the “People’s Movement of Ukraine”. Since 2017, Ukrainian Small Drama Theater has been operating in the premises of the “Museum of the Sixties”. The hall is designed for 50 seats.

Despite the fact that the building has changed its purpose, the ornaments and sculptures on the facade in the form of snakes and sirens still symbolize it’s original purpose. It is known that the snake throughout the history of mankind was a magical symbol of healing wounds, an emblem of doctors and medicine, a sign of wisdom. According to mythological symbolism, sirens should ward off trouble, which corresponds to the original medical purpose of the building.  It should be noted that the lush “hairstyles” of the sirens represented the fashion of the beginning of the century.

At the corner of the basement of the building, a lion stands in a formidable roar – a symbol of masculinity and strength.  At the bottom of the sculpture, the author’s autograph is preserved – “Fyodor Sokolov.  1907″.

Next time you’re out for a walk, make sure to stop and admire this historic building.