Superstitions – in and of themselves – are not inherently bad. They can give a culture a layered richness that defines it as unique from all others. However, not all superstitions are cute or quirky.

In Ukraine, perhaps the most annoying are the Soviet-era health myths. Go ahead – ask your Ukrainian friends how they would deal with a particular health issue. Have a sore throat? Put your feet in hot water. Have the flu? Swallow this shot of vodka full of pepper. The problem isn’t the superstition. It’s that the superstition is taken as fact. 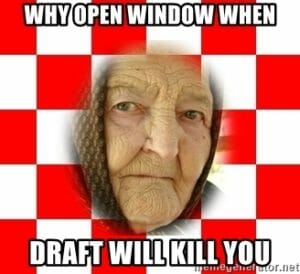 Take for example ‘protyah’. For our western audiences, ‘protyah’ is simply a draught of wind; a small gust that goes in one window and out the other.  For our Ukrainian friends, however, it is a very serious topic. This draught of wind – somehow different from any other regular gust of wind – can be deadly. This is not an exaggeration. This is something taken as proven fact by a majority of the Ukrainian population.

Acting Health Minister Uliana Suprun is well aware of this dangerous superstition. She has posted about the subject – rather unpopularly – for several months. “The draught itself is not bad. How bad is the wind?”, she posted on Facebook. “The draught as such does not threaten a healthy person.” Her words, however, have done little to affect the understanding of the Ukrainian population. For many Ukrainians, unfortunately, ‘protyah’ is simply scientific fact.

Don’t believe us? Test for yourself. The next time you are in a taxi and the driver has his window open, open your window. Be sure to time how long it takes for him to roll up his own window (to prevent the draught). He doesn’t under his watch, to be sure, want his passenger to get ill from ‘protyah’.

The top-rated comment on Suprun’s anti-‘protyah’ post is telling. It reads, “Another unequivocal proof that Suprun has been exiled from America to kill all Ukrainians. This post is written on the order of the State Department … specifically for Ukrainians to open windows in minibuses in order to die,” wrote one Ivan Alekseichuk.

For the life of us, we can’t tell if this guy is being serious or sarcastic. And therein lies the problem. It is entirely conceivable that this post was written in earnest.

So, while we can’t recommend “enjoying” this Soviet type of experience. Be sure to note it. If all works out just right, it won’t be around for much longer…