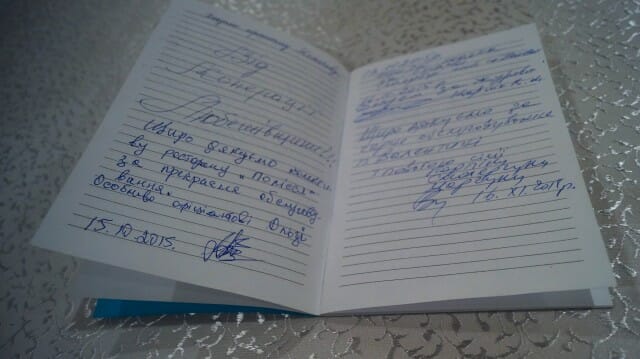 For those who don’t know, the complaint book is a legal document that every Ukrainian retail and service business is required – by law to make available for customers to leave reviews in. Think of it as Soviet Yelp – and they are just as entertaining as that sounds.

Besides just being a place for aggrieved customers to leave their musings for posterity, businesses are legally required to respond to the comments. These books are regularly submitted to the government – via a special accountant (also required for businesses to employ) – several times each year.

The books have become synonymous with the storied Soviet bureaucratic overreach, but their genesis goes back decidedly further. Chekov has a funny story about comments left in a railway complaint book that dates back to 1884. Still, the books reached their zenith of influence during the Soviet days. The restaurant bathroom doesn’t work? Write it in the book. Something not in stock? Write it in the book. Poor service (and let’s be honest, it was the USSR)? Write it in the book.

The stories of these books are legendary. In fact, one of the most popular movies in the Soviet Union in 1965 – at the height of the cold war – centres around a plot where the service at a restaurant is so bad that the complaint book is ‘always busy’ (it’s called Give Me the Complaint Book, if you were wondering).

You can still find complaint books in Ukraine, although their days are numbered. The government recently introduced a bill designed to free businesses from the need to keep them (and their accountants). A quick glance at the complaint book from a popular hangout in central Kyiv includes a three-page diatribe on poor service and menu choices. The reply from the business is the stuff of legends: “Oh – what pretty writing you have! Have you ever considered writing for Did Moroz (Santa Claus)”?”

Some things from Ukraine’s past – surely more than others – will certainly be missed.