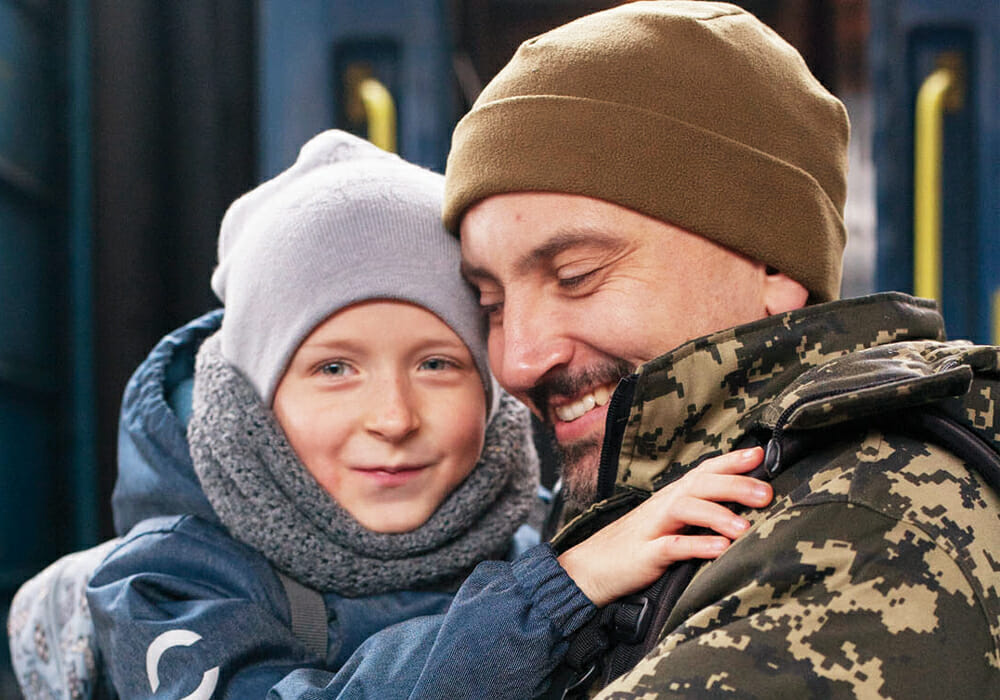 Three words that encapsulate the focus of this project 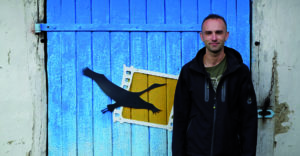 Loss in independent Ukraine’s 27-year history is already writ large. A revolution spanning the festive period a mere five years ago, descended into a bloodbath unseen in Ukraine since the darkest days of WWII. The festive season was effectively cancelled and despite the sacrifice and shared sense of revolutionary victory, the shared trauma of the price paid was only the beginning.

Annexation and invasion of large swathes of Ukrainian land followed. Just like on Maidan, Ukrainians rallied. Undeclared war with a neighbour – Russia – once called a ‘brother’. But brothers grow up; bonds become looser and sometimes are severed altogether. The fight continues and for many who took up the fight; that battle continues away from the frontline. This season, What’s On wants to give back and make it clear that wherever someone is working to defend this country, we stand with you! More importantly those who sacrificed, soldiers and civilians, we salute and support you in a country still not fully sure how to support veterans or displaced people alike. 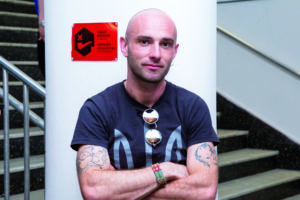 “The defenders stood firm, the concrete gave in.” This now oft’ quoted line closes Ukrainian filmmaker Leonid Kanter’s acclaimed 2015 documentary The Ukrainians, which charts the formation of the volunteer battalion he joined, from revolution in the depths of winter 2013-14 to becoming among the defenders of Donetsk Airport in the Russian-led war that followed. The concrete refers to the airport, and while they stood to the end, seven of the men featured lost their lives. This June, Kanter too lost his life, to suicide. 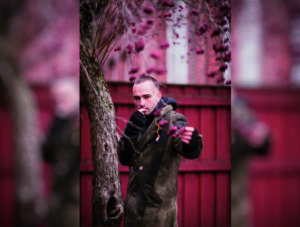 The 36-year-old’s death represents a wider picture of the scars of war, not physical but psychological. Kyiv-born Kanter was described by all who knew him as energetic, free-spirited, a modern-day hippie-like figure – the father of two daughters and a son was one of the founders of the Obyrok art-village in the Chernihiv oblast, moving there in 2007. There he organised art and culture festivals, including Mother Africa – designed to combat racist attitudes and promote African culture, and Bread – a festival where participants gathered to make, as the name suggests, bread. Beyond this, his film career was promising, as his short body of work attests to.

The Ukrainians continues to be one of the most poignant studies of the volunteer movement, but his dedication to the subject did not stop there. His award-winning follow-up feature Myth profiles Vasyl Slipak, the charismatic Ukrainian-born baritone who left behind his career with the Parisian Opera to fight in Luhansk, where he was killed in action. Kanter researched Slipak’s life over the span of a year, digging up performance footage and interviewing anyone who knew Slipak from his conservatory days in Lviv to his final breaths on the front line to uncover why he decided to devote himself to the same fight he himself had been devoted to. He would tour the European and North American film festival circuits with the film prior to its general release in March.

His next work promised to offer lighter fare, The Man With the Stool, which is based on his pre-war adventures of travel with his ex-wife, first daughter, and friends to deliver four kitchen stools to the coastlines of four of the world’s largest oceans. It was in post-production when something inside Kanter snapped.

Just days after leading documentary filmmaking workshops in Kyiv, Kanter returned to Obyrok. On 4 June he laid a carpet on the floor of a 3 cubic metre tank on his property and shot himself. According to police, he stated, in the notes he had left, that he had done all he could for Ukraine and had prepared his death in such a way so as not to taint the soil of his beloved motherland with his blood.

The Man With the Stool has been reedited in the wake of his death to reflect and pay tribute to his service and work during the war and as tacit acknowledgment of the psychological trauma he was dealing with but never spoke of. It is scheduled to be released this winter with a date yet to be set. 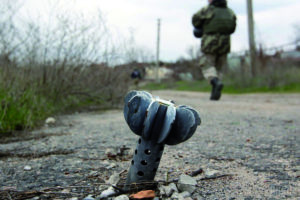 A calling. A sense of duty. An obligation. From the volunteers to those mobilised. Defending Ukraine is a reality none of these men and women bargained for. This season, as those in relatively peaceful areas of the country celebrate Christmas and New Year or New Year then Christmas, there are people determined or obligated to make that peace happen. For them this is no holiday. The reality of the situation in the east of Ukraine is that this is no sophisticated “Desert Storm” aerial war-type operation. It is trench warfare; something rarely seen since WWI. The goal is singular. Protect Ukrainian land.

A Call to Arms

When 50-year-old Ivan heard what had happened in Crimea in March of 2014, he went to the nearest military recruitment office to “ask whether they needed any help”. The office chief didn’t have a clear answer to this question. However, he promised to look at Ivan’s military records and get in touch if necessary. 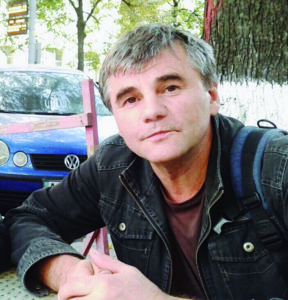 A year later, in March 2015, Ivan received a call from the recruitment office. He was invited to come by and clarify some information about his “military profile”. Ivan showed up immediately. A few hours later he came back home and told his two children and wife “it’s my turn to go…”

As a former Soviet army officer, Ivan took a squadron with 120 soldiers under his command. He remembers his military service in Donbas with pain on his face. “There were lots of brave men, young patriots ready to give their life for the name of Ukraine. So many of them died,” he says.

It was Ivan and his squadron who bore the brunt of a battle near Kurdiumivka village, one of the epicenters of the war in 2015. The officer looks back at those days with regret: Ukrainian troops were not allowed to shoot in response. “We were sitting in trenches and hiding, while Russians were shooting us. All we wanted to do was stand up and fight, but we couldn’t disobey the ceasefire order that was in place at the time.”

After 16 months in Donbas, he came back home, safe and almost sound. At 54 he looks fit. His boyish face contrasts with his gray hair. Even though Ivan speaks with confidence, it sometimes seems he is far away from where he physycally is. Distracted. “Not everyone should go to the war. I think we should do what we can do best, and do this for our country. Those, who can write, should write. Those, who are good at science, should do science. I know how to fight, so I went to the war.” 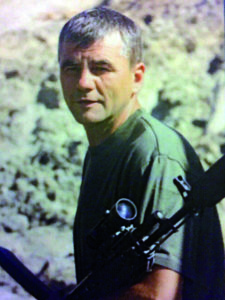 Ivan learned “how to fight” when he was serving as a soldier in the Soviet army. At the age of 17, just two months after his conscription, he was relocated from Khmelnytskiy to Tashkent. It was the third year of the Soviet-Afghan War (1979-1989). After a short term training, Ivan and other former schoolboys touched down in a true-life hell.

When Ivan talks about war, it’s sometimes hard to understand whether his mind is walking through 1982 or 2015. The time spent in Donbas has not only left deep scars on his life, but it also opened old wounds.

“We all thought that the fact that we got together and came there would be enough to end the war. Unfortunately, it wasn’t. I wish I could do more,” Ivan adds, and lets out a deep sigh.

“My name is Nina. I have been part of the What’s On team since the magazine re-launched. Ivan is my father-in-law.” 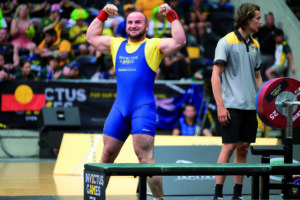 Hope. For many, particularly volunteers, the war in eastern Ukraine provided a sense of purpose they might have lacked before. Coming home is a different matter; there are readjustments to be made. There is perhaps not the reception or support they anticipated. For some it is a struggle, for others it sparks a renewed determination, and this time of year all those feelings become more acute.

However, for the determined they made a mark and they paid a price. They are determined to be heard. And they are doing so on a stage where the whole world can see: the Invictus Games. 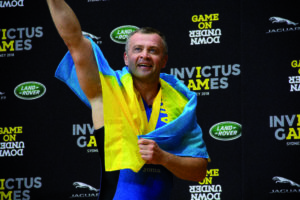 Rehabilitation through sport – this is the cause the Invictus (Latin for unconquered) Games pursues on a global scale. Launched by the UK’s Prince Harry four years ago, the event enables wounded or sick service personnel to take part in sport. Ukraine’s national team – whose members are those who fought in the country’s eastern regions – brought 14 medals home from Toronto, Canada in 2017. In October 2018, they travelled to Sydney to win 20 medals – seven gold, 10 silver, and three bronze.

When Russia unleashed its aggression against Ukraine in 2014, Ilnytskyi joined the Ukrainian Volunteer Army – together with his 22-year-old son. A chief of staff, Ilnytskyi is engaged in the Joint Forces Operations on the frontline to date.

“Even in the combat zone, our guys continue to train. Physical exercise and humour relieve stress and remove negative energy,” says Ilnytskyi. “Alas, Ukraine has no general state-supported rehabilitation programme for those coming home from war. There are only initiatives like the Invictus Games.”

“Drugs and alcohol don’t do any good. Sport can be a way out for injured soldiers,” chimes in Chernihiv-born Oleksandr Havrylenko, a 30-year-old police staff sergeant, father of a two-year-old daughter, and gold medallist in powerlifting. 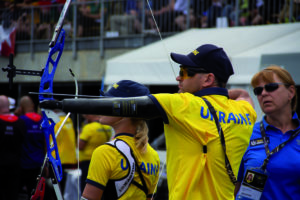 Havrylenko suffered mine shrapnel wounds to his back and neck near Chornukhine village in 2015 when Ukrainian troops were withdrawing from Debaltsevo. “It was the most dangerous out of my four rotations. After treatment, I returned to my job, which also helped me get back on my feet,” explains Havrylenko.

“Owing to the project, I regained self-confidence and achieved many personal victories,” says Oleksandr Zozuliak, a silver medallist in archery. He lost his left hand in January 2015. “A tank twice ran over me and pressed me down as I was in a trench. Doctors said my state would never improve. I persuaded myself that things would change and started working on myself.”

“Soldiers have fulfilled their duty, and they can still represent their country, just in a sports arena,” adds Havrylenko.

“It was a challenge for me to practice archery with one hand. Within half a year I was able to shoot 300 times in just one work-out,” Zozuliak says. Now he thinks about pursuing a Paralympic career.

Sydney brought together 18 nations. Russia is denied participation since only non-conflicting countries can join the club. Ilnytskyi says, “Our mission is to make the world see there is a war in Ukraine, dragging into its fifth year. During the competition, Ukraine was the only country invited to the Australian Parliament where our delegates, myself included, delivered a speech.”

The initiative is not about fighting for medals. It generates a wider respect for wounded service staff and inspires the international veteran community to get together and set an example for others.

Hague, the Netherlands, hosts the 2020 games. For more information about Ukraine’s involvement: invictusgames.in.ua