Ghostemane live (US, hip-hop, rap)
April 18 at 20.00
Closer (Nizhneurkovskaya 31)
This tattooed emo-looking boyfriend would look perfect at the front of a metal band, or perhaps even as a character on Final Fantasy. Ghostemane does not, however, resemble his true industry competitors – Eminem and the Beastie Boys; the fault perhaps of the hot California sun. None of that really matters however when you start listening to his tracks. Ghostemane’s style is active, if not aggressive and fully in-line with his appearance. With his first appearance in 2014, today the rapper boasts more than 15 releases, with his unlikely appearance hardly detracting from the quality of material. See and hear him for yourself this month.
Admission: 1190 UAH
FB closerkiev 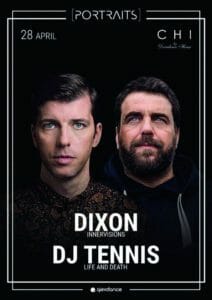 Portraits Ep.4 with Dixon (GE, house) and DJ Tennis (IT, electronic)
28 April at 22.00
CHI by Decadence House (Parkova 16a)
An atmospheric evening awaits, at the helm of which are two great DJs.
DJ #1: despite being withdrawn from the public eye, with no big chart-pleasers, avoiding mainstream trends, rarely giving interviews or appearing on social media, this Dixon has for four consecutive years topped Resident Advisor ratings.
DJ #2: starting his music career managing tours for punk bands and organising concerts and festivals in Italy, 48-year-old Manfredi Romano, also known as DJ Tennis, certainly knows how to get a party started. In 2010, Manfredi reformatted into a DJ, founded the super-successful Life and Death record label and in just a few years became a hallmark producer and techno DJ.
The first three events in the ‘Portraits’ series by CHI and QievDance rocked. Considering the unusual talent assembled, expect nothing different the fourth time around.
Admission: 800 UAH
+38 067 488 2013

ATOM & TOBIAS live (GE/DE, )
05 May at 23.55
Closer (Nizhneurkovskaya 31)
Atom &  Tobias are well-known figures in the world of electronic, and for many they are considered living legends. Tobias began his career in the early 80s, using the pseudonym Pink Elln and went a long musical path from pop to clubbing, to an experimental and generally unqualified classification. Uwe Schmidt, better known as Atom, has a similar musical background, and is known for his work under the pseudonym Senor Coconut, plus a dozen others. The pair met in 1986, when they lived in Frankfurt, and has since manifested itself in the form of improvised live performances. Catch them live in Kyiv this spring at legendary venue Closer.Admission: call for information
FB closerkiev