The Not So Snowiest Kyiv

No matter whether you’re into historical tourism, off-the-beaten path-type experiences, or some of Europe’s hottest parties, Kyiv is the place to be in 2020 and What’s On Kyiv is your guide to what’s going on. 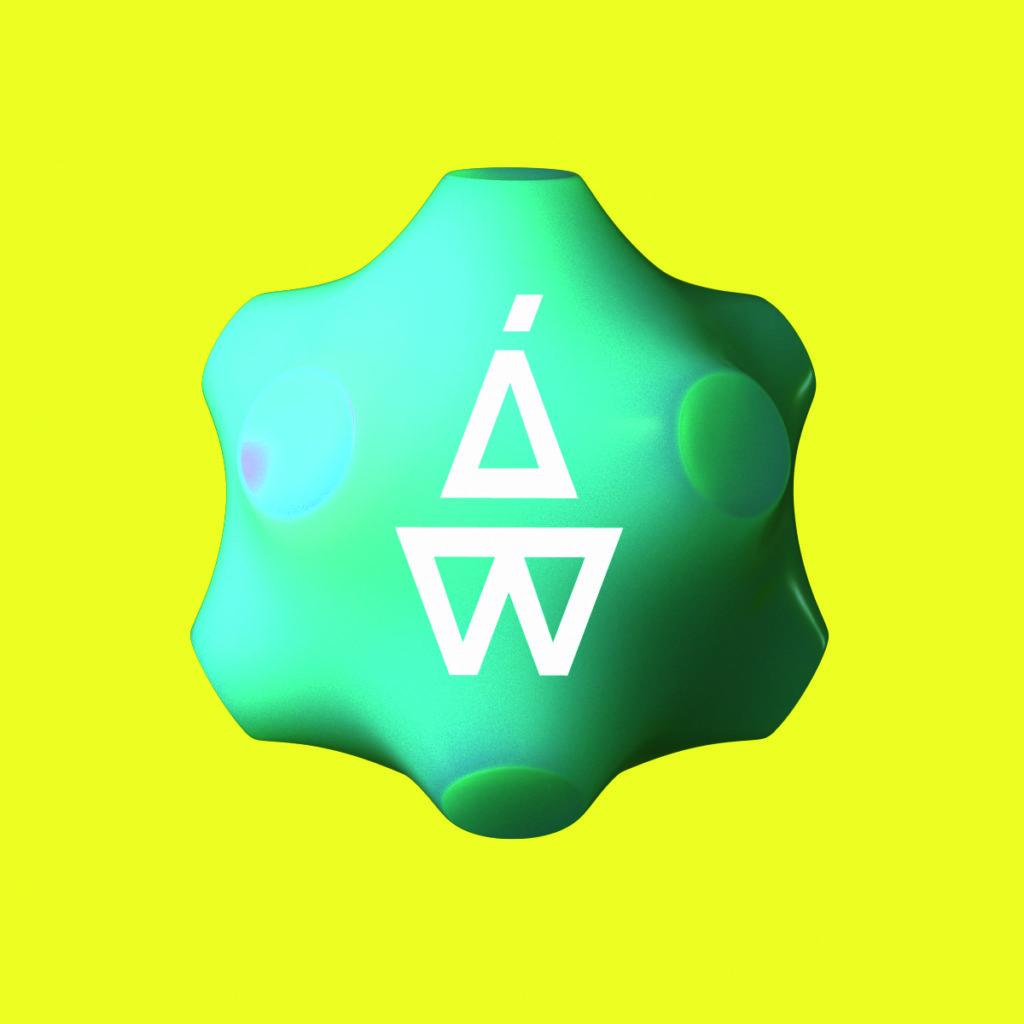 1 CATCH A CONCERT IN EASTERN EUROPE’S HOTTEST MUSICAL FESTIVAL DESTINATION
Kyiv’s reputation for throwing a proper party has attracted some of the world’s hottest talent to some of the world’s hippest festivals over the past few years. Bands like the Red Hot Chili Peppers, the Chemical Brothers, Muse, 30 Seconds to Mars, and the Gorillaz have joined Ukraine’s hottest groups at festivals like Atlas Weekend (7-12 July at VDNKh), UPark (21-23 July at Sky Family Park), and Kraina Mriy (twice yearly at Spivoche Pole). Tickets sell like hot cakes, so get yours early!

2 GET IN TOUCH WITH YOUR ARTISTIC SIDE AT GOGOLFEST Ukraine is home to some of the world’s most cutting-edge avant-garde perfor-mance art and GogolFest Contemporary Art Festival highlights it all. From inventive musical performances and groundbreaking theatre plays to state-of-the-art audio-visual art exhibitions and original literature recitals – GogolFest is your one-stop-shop to discover Kyiv’s artistic side. Keep your calendar open. 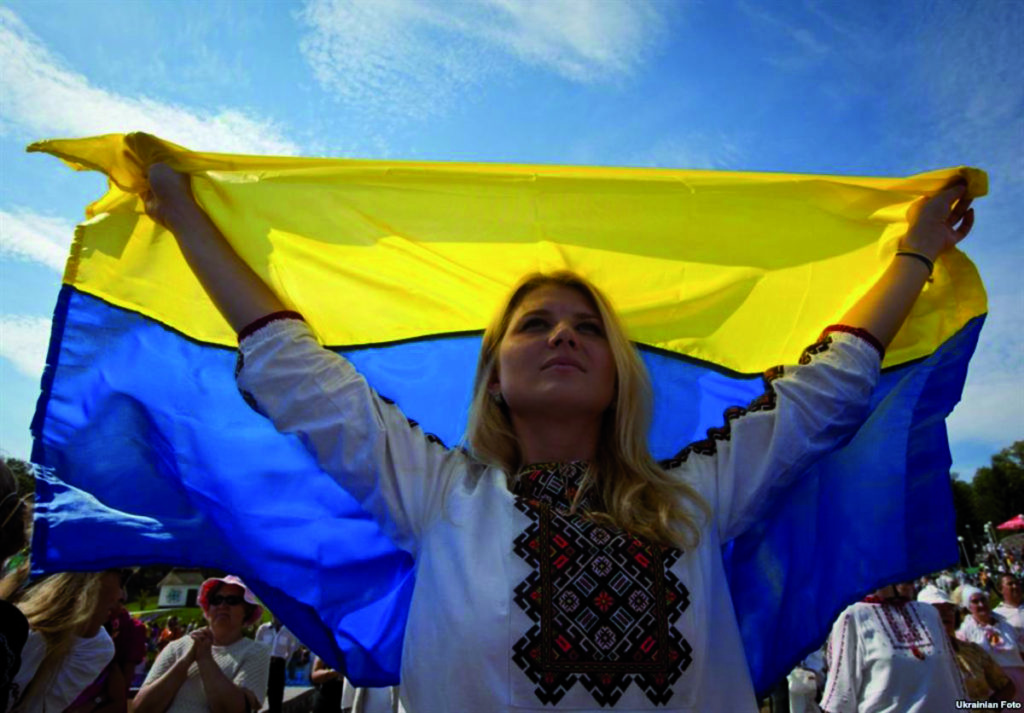 3 GET YOUR ‘PATRIOT ON’ DURING INDEPENDENCE DAY
Living in the Ukrainian capital can have its advantages – and maybe at no time of the year is that more evident than during Independence Day (24 August). Gone are the Poroshenko-era parades of mil-itary might, but there are still plenty of ways Ukraine’s still-at-war military are honoured. Besides that, there are hun-dreds of activities going on around the city for children of all ages – all wrapped in a blue-and-yellow bow tie. If you’re not here in August, Kyiv City Day (31 May) is also well worth the time.

4 DISCOVER KYIV’S RICH RELIGIOUS HERITAGE
With two UNESCO-recognised churches, and the heads of several other denomina-tions, there is no shortage of world-class cathedrals to check out in the capital. Most start with St. Sophia Cathedral (Volodymyrska 24), where you can dis-cover the sarcophagus of Prince Yaroslav the Wise, and the Moscow-Patriarchate Pechersk Lavra (Lavrska 15), with its spooky catacombs. Also worth visits are St. Michaels Golden-Domed Mon-astery (Triokhsviatytelska 8), St. Volo-domyr’s Cathedral (Shevchenko Blvd 20), St. Andrew’s Church (Andriivskyi Descent 23), and St. Nicholas Roman Catholic Cathedral (V Vasylkivska 75). 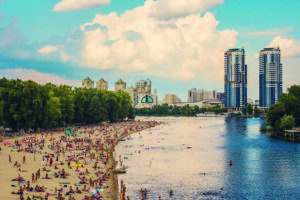 5 COOL OFF AT ONE OF KYIV’S KICKIN’ BEACHES
There is maybe no more popular way to beat Kyiv’s summer heat than to head down to the Dnipro. Most Kyivans prefer Trukhaniv Island (Dnipro River), where you can water ski at X-Park (Dru-zhby Narodiv Park), get your scuba diving license, and even take a zip line over from the Friendship Arch, or Hy-dropark for its themed beaches, Sovi-et-era amusement park, and boat rentals. Of course, you can always rent a kayak and find your own private beach, take a cruise down the river with a relaxed din-ner, or sail on into the night on a ‘booze cruise’ with club-type music.

6 REMEMBER THE EUROMAIDAN (REVOLUTION OF DIGNITY)
This year marks the sixth anniversary of the revolution that ousted the former pres-ident and set Ukraine on its current European path. Start at Maidan Nezalezhnosti, the heart of the protest between November 2013 and February 2014, and then work your way up Heavenly Hundred Alley to the EuroMaidan memorial (near the metro station). Finish at Revolution of Dignity museum at the Trade Union House (Khreschatyk 16). There is plenty of English-language signage, although a tour guide is well worth the price. For the full experience, head over to the Museum of Corruption (Novi Petrivtsi) to see just why Ukrainians rose up against their corrupt president. 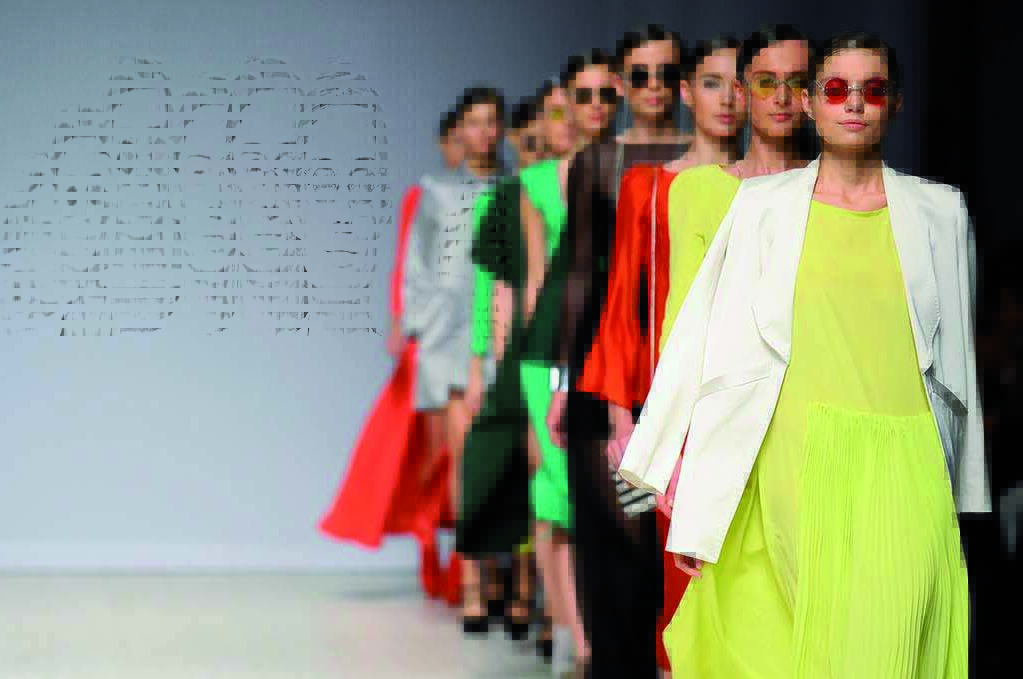 7 GET CHIC AT UKRAINIAN FASHION WEEK
Ukrainian fashion has been all the rage for the past decade, with Hollywood elites like Nicole Kidman, Reese Witherspoon, and Sandra Bullock wearing Ukrainian designers. You can discover for yourself just what makes Ukrainian fashion so chic by seeing some of Ukraine’s top designers at Ukrainian Fashion Week this month at 1-5 February at Mystetskyi Arsenal (Lavrska 10-12) and later in August.

8 HAVE SOME CHAMPAGNE AND CAVIAR AT THE NATIONAL OPERA OF UKRAINE
Not only does Kyiv have one of the most talented ballets (Kyiv National Ballet) and avant-garde theatre troupes (Dakh Theatre) in the world, but regular per-formances of the symphony, opera, and Ukraine’s top musical acts makes a ticket to a National Opera House (Volody-myrska 50) event one of the must-do’s in the capital. If you can, try to catch the P. Virsky National Folk Dance En-semble or Dumka National Choral Cappella for a truly Ukrainian cultural experience. 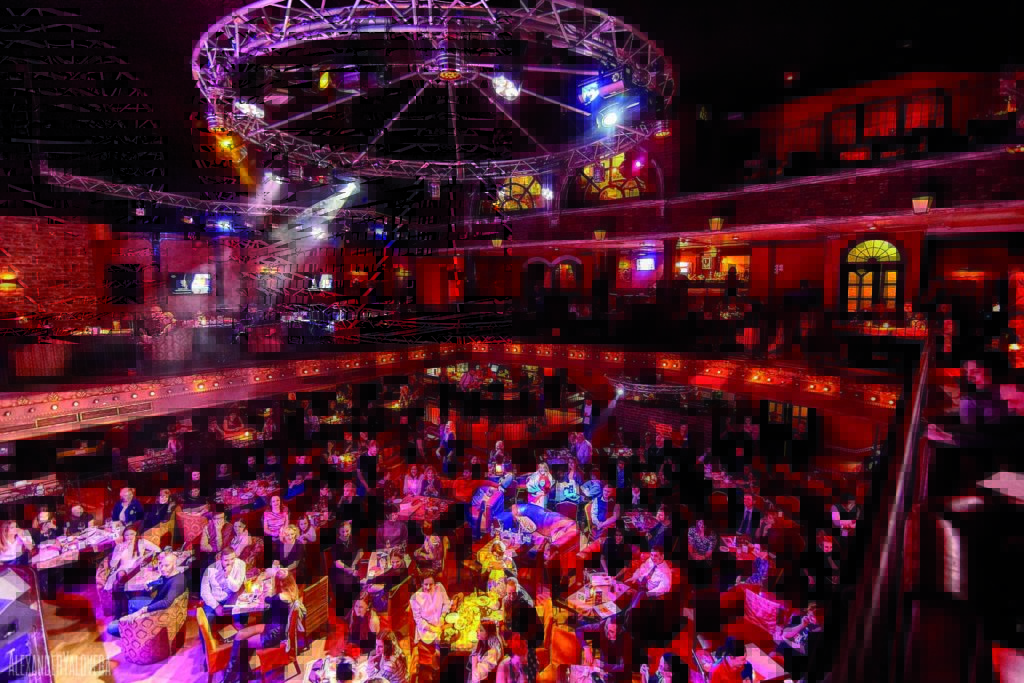 9 PAINT THE TOWN RED AT THE HOTTEST CLUBS THIS SIDE OF BERLIN
Kyiv’s late-night scene is legendary and a trip out on the town is an experience in its own right. Like everywhere, the hippest places change regularly so keep reading What’s On Kyiv to discover what’s hot when you’re here. A few never-fails include Caribbean Club (Symona Petliury 4), SkyBar at Arena City (V Vasylkivska 5), Cinema Club (Iziumska 7), D.Fleur (Grushevskoho 5) and Green Theatre (Parkova 2). A word to the wise – “face control” is strictly en-forced here, so dress in your Sunday bests!

10 HUNT FOR SOUVENIRS ALONG ANDRIIVSKYI DESCENT
No visit to Kyiv is complete without a trip down (or up!) the 720-metre Andriivskyi Descent, also known as Ky-iv’s Montmartre. The daily market is the perfect place to find that one-of-a-kind gift from Ukraine for your loved one. Plus, with top-end eateries, modern art galleries, and the Bulgakov House (Bolshaya Sadovaya 4), there is plenty to keep you occupied when you’re done shopping. Finish off in Podil or take the Kyiv Funicular (Volodymyrska Hill) back up to St. Michael’s Monastery. 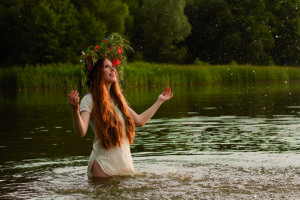 11 CELEBRATE THE WORLD’S LONGEST HOLIDAY SEASON Ukraine is famous for its lengthy holiday season, which stretches from mid-Decem-ber to mid-January. With events from St. Nicholas Day to Christmas and New Year’s to Epiphany – celebrated ac-cording to both the Julian and Gregorian calendars – there is no shortage of things to see and do. Holiday markets sprout up across the city, with the most popular lo-cated at Sofiivska Pl, Kontraktova Pl, and VDNKh Park. Not here in winter? Try checking out Ivana Kupala Day (6-7 July) at Kyivska Rus Park (in Kopachiv).

12 BLEED BLUE & WHITE AT A DYNAMO KYIV GAME
Football is more than a sport in Ukraine; it’s a religion. And there is simply no bigger team than Dynamo Kyiv. Be sure to catch a game while you’re here – especially if they’re playing in the Champion’s League, Eu-ropa League, or against rivals Shakhtar Donetsk. Olympic Stadium (V Vasylkivs-ka 55) offers English-language tours on non-game days and the Klitschko Brothers Museum and official Dynamo Kyiv store are also open on off days. 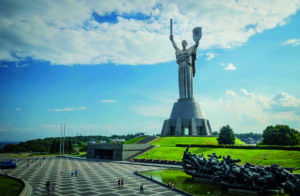 13 HIKE UP THE MOTHERLAND MONUMENT
One of Kyiv’s most iconic images is that of the 102-metre Motherland Monument. Considered Kyiv’s Statue of Lib-erty, the site boasts interesting museums to all of Ukraine’s wars since WWII. Be sure to check out the WWII Museum at the statue’s base, which includes a worth-while English-language exhibition on the current conflict in Eastern Ukraine. Ad-venture seekers will want to climb to the top of the monument. If you do it on a clear day, there is simply no better photo op spot in the city.

14 INDULGE YOUR APPETITE IN UKRAINE’S CULINARY CAPITAL
As the culinary capital of Ukraine, it is well worth your time to explore some of Kyiv’s favourites. Be sure to stop by Perepichka (Khmelnytskoho 3), a place so popular with locals that lineups can be hundreds of people deep. Locals also love the buffet-style Puzata Khata (many locations) while the brand-new Kyiv Food Market (Moskovska 8) is the city’s trendiest new eatery. The Anthony Bour-dain-approved Bessarabskiy Market (Bessarabska 2) is also worth a peek. Must-try foods include Chicken Kyiv, borsch (red or green), varenyky (dumplings), holubtsi (cabbage rolls) and, of course, Kyiv Cake!

15 LEARN ABOUT THE WORLD’S BIGGEST PLANE ON THE ANTONOV PLANT TOUR
If you’re looking to try something a little more off the beaten path, look no further than a tour of Kyiv’s Antonov Aircraft Plant (Akademika Tupoleva 1). Makers of the Guinness Record-Holding largest aircraft of the world – the Antonov Mriya (Dream), the plant continues to manufac-ture both passenger and cargo jets. Dis-cover the history of the company at the museum and get an up-close look at the aircraft. If planes are your thing, be sure to check out the cool collection aircraft at the State Aviation Museum (Medova 1) near Zhuliany Airport.

16 ‘LEARN BEFORE YOU GO’ AT THE CHORNOBYL MUSEUM Thanks to HBO’s smash-hit miniseries on the crisis, Ukraine’s Chornobyl (134 km north of Kyiv) has become one of the world’s hottest tourism tickets. While there are plenty of options to take the two-hour ride north to see the sites, be sure to stop by the Ukrainian National Chornobyl Museum (Khoryva Lane 1) to learn about the tragedy before you go. With artifacts, multimedia exhibits, and scale models, the museum is a must-visit before heading to the site. English guides are worth the investment. 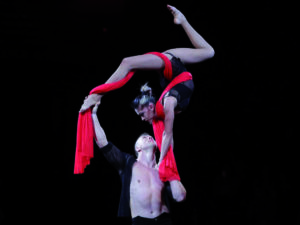 17 EXPERIENCE THE WONDER OF THE NATIONAL CIRCUS OF UKRAINE
Circus acts in Vegas continue to be one of the hottest draws on the Strip – but where do you think they recruit many of the performers from? The National Circus of Ukraine (Peremohy Sq 2) has been entertaining audiences in the capital for nearly 150 years and continues to be one of the most magical and wonderful en-tertainment venues in the country. With several shows each week and no need for translation, the Kyiv Circus is one of the most popular activities for expat families and visitors with children.

18 EXPLORE KYIV’S UNDERBELLY ON AN UNDERGROUND TOUR
If you’re looking to beat the heat in summer, one of Kyiv’s “coolest” tours is underground. Exploring Kyiv’s underbelly will take you through part of Kyiv’s drainage system, where you’ll see underground rivers, drain systems, and even an underground waterfall. Soviet architecture and engineering are also on display during the Underground Tour (urbex.tour.com). You’ll need to book in advance for this one and, of course, not be afraid of the dark! 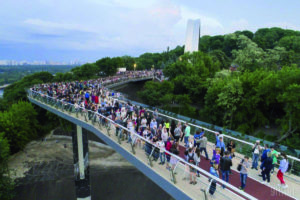 19 TAKE A SELFIE ON THE NEW PEDESTRIAN BRIDGE
Connecting the Friendship Arch to St. Vo-lodymyr’s Hill in the heart of central Kyiv, the new pedestrian bridge is one of the top spots to snap a pic of the city or the majestic Dnipro and a popular place for lo-cals to grab selfies. The glass-and-concrete bridge stretches 212 metres with popular observation areas and a transparent walk-way to help you nab that sensational snap.

20 GET TRENDY AT ART ZAVOD PLATFORMA
Art Zavod Platforma (Belomorskaya 1) on Kyiv’s left bank is the country’s larg-est creative cluster and home to some of the city’s coolest events, including White Nights, Tattoo Fest, and Comic Con. Lo-cated on the territory of a massive Soviet silk factory, this uber-cool collective is also home to live concerts and street food festi-vals, as well as exhibitions, workshops, and a modern bazaar (Ukrainian flea market).