Imagine high-tech drama unravelling in front of you on stage. A performer in a wolf mask enters a seemingly innocent virtual game that turns into a dangerous race for survival. Then the most unexpected occurs – the wolf appears to fly high, plunge into the ocean, and spin in the air where all his moves are synced with a computer-generated backdrop. On America’s Got Talent anything can happen. And Ukrainians can be there.

A Ukrainian Flavour
It is The Escape, a sensational ‘live movie’ the Ukrainian team recently showcased at the America’s Got Talent auditions (AMG) to obtain four “yeses” and a standing ovation from the jury. One of them, Simon Cowell, said, “It is exciting to see things we’ve never really seen before because it is like going into the future.”
Since airing on NBC, the video has clocked up more than 2 million views. The cutting-edge production is the joint effort of three Ukrainian companies – Front Pictures, PROFI LTD, and Red Rabbit Entertainment. 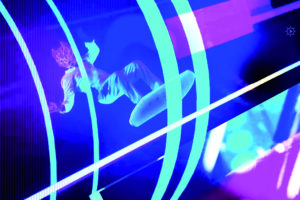 What’s the Story
To find out more, What’s On talks to one of the masterminds, choreographer Konstantin Tomilchenko. Creative producer of Ukraine’s first 3D musical Baron Munchausen, as well as Everybody Dance and X Factor-2, he also staged both Jamala’s and Melovin’s Eurovision performances in 2016 and 2018 respectively – to name just some of his achievements.
“Initially, this multi-genre project was my brainchild. I wanted to blend interactive dance, graphic arts, stage acting, and immersion effects,” Tomilchenko says. “Together with Front Pictures and PROFI LTD we spent 11 months on developing an idea that engaged more than 20 people.”
The positive answer they got from AMG’s organisers inspired them to move forward. “We sent them our raw materials and got an invitation. They believed in us. It was very motivating,” Tomilchenko says.
As a result, the guys invented brand-new technology: “It allowed us to produce what we call a ‘live movie’,” says Tomilchenko.

Success Breeds Success
Following their triumph in the US, the group has received proposals from other talent shows in Germany, China, and some Arab States. Some international companies have also expressed an interest in their invention.
“We keep our know-how secret and plan to patent it,” Tomilchenko adds. “We will further improve it to make an outstanding landmark show presenting Ukraine on a global level.”
The Escape has a story to tell – the wolf, played by Tomilchenko, epitomises the inner side of an individual who rejects his nature. Self-cornered, he runs for his life and gets stuck in a virtual world that eventually destroys him.
In the meantime, Tomilchenko and his team are preparing two more performances for an AGT semi-final set for August. Stunning and innovative, they will also offer an intriguing plot that leaves room for viewers’ imaginations.