Going out to the forest on any early summer morning to pick mushrooms is a time-honoured tradition in these lands. What’s On joins Dr Viktor Bilay – an expert in all things fungi, to take you through the practice and ensure you stay healthy and well once it’s time to sit down at the table.

Like property speculation, when it comes to mushroom picking, it’s all about location, location, location. When looking for tasty fungi one should go as far out in the forest as possible, preferably where there are a good many old trees, particularly pine and oak. The reason for this, as expert Dr Viktor Bilay explains, is that mushrooms absorb nutrients from their immediate environment, and mushrooms growing by the side of the highway will be full of heavy metals and chemicals thrown out by labouring Ladas and oligarch-driven jeeps. Eating a pie made from mushrooms grown by the road is pretty much akin to breathing in concentrated highway, so avoid them at all costs. “In the past, the Chornobyl region was famed for its mushrooms and the Soviet agricultural authorities would organise large conferences there. Today, that’s all changed of course, but if somebody is looking for a great place for a good weekend’s mushroom picking, you can’t go wrong with Kaniv, down along the Dnipro,” explains Bilay.

Always investigate mushrooms with a stick or knife: touching a poisonous mushroom with your hands could well cause a reaction. Stay well away from those which are red, as this is nature’s way of telling us not to touch but in general you should only pick those mushrooms which you know. “Even I make mistakes sometimes,” says Bilay. “Don’t experiment with yourself.” Poisonous mushrooms are no laughing matter; even seasoned Ukrainians have had food poisoning from a bad mushroom, the remedy for which Bilay explains is just to vomit: “At least it’s out.”

Once you’ve found a nice secluded enclave you can begin your mushroom hunt. Tasty fungi are found under trees, as they feed off nutrients from the roots, where the number of mushrooms that will end up in your basket depends largely on the weather and time of year. “Mushrooms are at their peak between June and October. They tend to come out more when it’s been a wet summer,” says Bilay. So, we can expect a bumper crop of mushrooms over the next few months then? “Well,” he chuckles, “that’s the idea. But sometimes all the conditions can be right and there’ll be no mushrooms around at all. Really, their appearance can be like magic.”

Mushrooms have been a popular dish in Ukraine for hundreds of years in no small part to the medicinal properties many still believe they possess. Chronicles from Kyiv Rus, dating back to the eleventh century, tell of mushrooms being applied against uterus cancer, to help prevent and cure tuberculosis, and for the purpose of cauterisation. Mushroom mania in the medical world reached its peak during the 16th and 17th centuries, when healers – from court surgeons to the local wise woman – proscribed various forms of mushroom for sweating, stomach bleeding, and even frostbite. Mushrooms came to the fore even more so during cholera epidemics, which continued to kill off Kyivites with regularity into the early 19th century. During these times, many locals had to rely on traditional folk remedies as, owing to policies of Russification, all governmental advice was written in Russian; leaving many, and the peasantry in particular, none the wiser. Unfortunately, much of this old received wisdom has been lost over time, but today there is renewed interest in the medicinal properties of the mushroom, with the Japanese in particular cultivating the fungi for medical purposes.

Bilay too still enjoys a good mushroom-based dish, despite working with spores and strains of the fungi day in and day out. He even has a special recipe which he wants to share with What’s On: “I like to eat my mushrooms raw – that’s cultivated mushrooms not wild mushrooms. I cut them up thinly, add salt and pepper, and serve them up with a salad. The best mushrooms to use, if we are talking about wild mushrooms, are Boletus Edulis, or Penny Bun Bolete as they are called in English. I call them the ‘King of Mushrooms’ owing to their size, abundance, great taste and smell, and they are generally quite easy to find, usually growing by large old oak trees and pine.”

And when it comes to mushroom recommendations, it doesn’t come much higher than that! 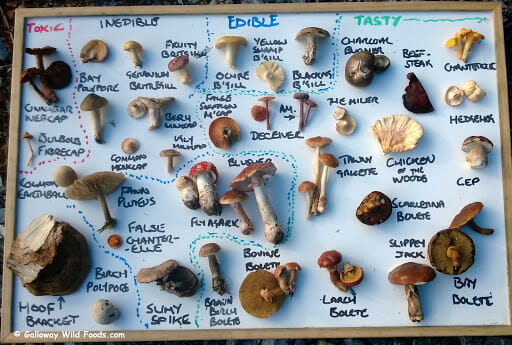 Mushroom Pickings Dos and Don’ts
• Do read up on mushrooms before to go out to the woods
• Don’t pick a mushroom you do not know
• Do go out into the heart of the woods. This is where the best mushrooms grow
• Don’t pick mushrooms growing beside roads or in other environments where quality of life is in question. Mushrooms absorb almost anything
• Do carry a stick and a knife to examine mushrooms
• Don’t touch any mushroom with your hands until it has been correctly identified