Who to watch, where to watch, when’s it on – here’s your complete guide to Ukraine at the 2018 Winter Olympic Games in PyeongChang, South Korea.
While events in its northern neighbour have carried the headlines for much of the last year, South Korea will have the world’s focus in February as the world’s best athletes – and Ukraine’s finest – head to PyeongChang for the 23rd Olympic Winter Games.
Ukraine thrives at the summer editions. Outside of biathlon, however, Ukrainian winter athletes are hardly medal threats. For good reason: fully half of Ukraine’s Olympic budget is spent on its biathletes (€17.9 million), and that paid off in 2014 when the women’s biathlon team captured only the second Winter Olympic gold medal in Ukraine’s post-independence history. The entire team is returning to the Olympics this year, and with three skiers in the top 10 of the world cup standings, the team stands a good chance of repeating their previous success. 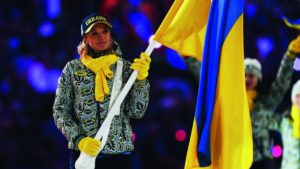 Alpine Skiing – 1 man, 1 woman
Ukraine has never produced a truly elite alpine skier, but if you love the sport and are looking to cheer for the home grown, check out Ivan Kovbasniuk and either Tanya Tikun or Olga Knysch.
Competition dates: FEBRUARY 11-15, 17-18, 21-24

Biathlon – 5 men, 6 women
Approximately one quarter of all of Ukraine’s 2018 Olympians are biathletes and the women look set to shine. Mark 22 February (13.15 – 14.45) in your calendar as the women’s team of Vita and Valj Semerenko, Olena Pidhrushna, and Yuliia Dzhima again look to become women’s relay champions. Also, watch Vita be awarded her silver medal from 2014, after the silver-medalist Russian was disqualified from the Sochi Games for doping.
Competition dates: FEBRUARY 10-12, 14-15, 17-18, 20, 22-23

Figure Skating – 3 men, 3 women
Ukraine will be represented in all figure skating events with Ivan Pavlov and Anna Hnychenkova in the singles events, Renata Oganesyan and Mark Bardey in the pairs, and Aleksandra Nazarova and Maksim Nikitin in the ice dance. Hnychenkova is likely a good bet for a top five finish.
Competition dates: FEBRUARY 9, 11-12, 14-17, 19-21, 23, 25

Freestyle Skiing – 1 man, 2 women
Likely Ukraine’s best chance at a medal outside biathlon, Oleksandr Abramenko and Olga Polyuk return after their top 10 performances in Sochi. After finishing sixth at his third Winter Games in 2014, Abramenko became the first Ukrainian to win the World Cup in any freestyle discipline in 2014-15, winning the season title in aerials.
Competition dates: FEBRUARY 9, 11-12, 15-23

Nordic Combined – 1 man
Viktor Pasichnyk will return for his second Winter Games to wave the blue and yellow banner in this discipline that combines cross-country skiing with ski jumping.
Competition dates: FEBRUARY 14, 20, 22

Snowboarding – 1 woman
Annamari Dancha will return for her third Winter Games in February, where the No. 38-ranked snowboarder will try to beat her best result – a round of 16 loss to the eventual bronze medalist in the 2010 parallel slalom in Vancouver, Canada.
Competition dates: FEBRUARY 9, 11-12, 15-23

Events Not Qualified For
Ukraine has yet to qualify any athletes in Bobsleigh, Curling, Ice Hockey, Short-Track Speed Skating, or Speed Skating events.

It’s just not our thing: Ukraine has only ever medalled in two Olympic sports – biathlon and figure skating. The country has only won seven medals in six Winter Games. Ukraine’s only Winter Olympic champions are Oksana Baiul (1994 figure skating) and the women’s biathlon team (2014). The only Ukrainian man to ever win a Winter Olympic medal is Ruslan Goncharav – a bronze in ice dance with Elena Grushina at the 2006 Winter Games.
With qualification events still pending, the Ukrainian team is not yet confirmed. Still, approximately 40 of Ukraine’s best will be in Korea. Other than biathlon, keep your eyes on Ukraine’s figure skaters and aerial skiers, who have outside chances of landing on the podium. Overall, Ukraine will compete in nine sports. See below for who, where, and when to watch.
All Ukrainian Olympic programming can be found on the UA: First channel. But yours truly will be reporting on all the goings-on in English.

That’s my claim to fame: Who is Ukraine’s first post-independence Winter Olympic champion? Most would say figure skater Oksana Baiul, who won gold in Lillehammer, Norway in 1994. But don’t tell Viktor Petrenko that. He’s still miffed that he didn’t hear the Ukrainian anthem when he captured gold in Albertville, France at the 1992 Games. The Ukrainian National Olympic Committee wasn’t recognised in time for Ukrainian Olympians to compete under their own flag, much to Petrenko’s chagrin.