On the fifth anniversary of Ukraine’S Revolution of Dignity, a new exhibition opens to reveal and commemorate the realities of the events of that time. Identity Interrupted by Ola Rondiak takes a piece of history and intertwines it with her own.

“Identity Interrupted is a metaphor for Ukraine.
It demonstrates its indominable determined spirit”

Growing up in the US, the daughter of Ukrainian immigrants, Ola Rondiak was no stranger to Ukrainian culture or its traditions. Attending Ukrainian school on the weekends, Ukrainian church on Sunday, Ukrainian camp in the summer, and speaking Ukrainian at home, Rondiak says it was natural to tell people she was – Ukrainian. The Ukraine she was identifying with however was the one her mother left at the age of 11. Enter her newest exhibition, Identity Interrupted. 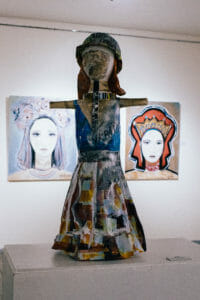 Living mainly in Ukraine for the last 23 years, Rondiak has connected closely with Ukrainians. Witnessing two revolutions and the continued struggle for freedom, the identity she once held so tightly to in the US has been redefined to include one that is not just about language or tradition. It is one that involves a deeper feeling of belonging to and caring for a nation she and her husband now call home. “I have learned that by following my heart and moving here I was able to form a more mature identity, which includes my American and Ukrainian roots. Living here and seeing how people still aren’t allowed to travel as freely as I am, has also helped me respect the freedom of America that we often take for granted.” 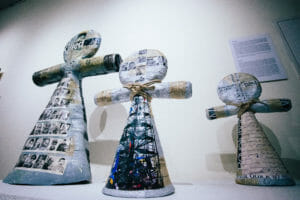 Identity Interrupted takes into account this juxtaposition of self and country and puts it on canvas. Featuring women’s faces and emotional states in paint and collage, many pieces of which come from magazine and newspaper clippings – including What’s On, Rondiak looks not just at her own identity but that of the country. “Following the Revolution of Dignity, I think a lot of Ukrainians started questioning their own identities, or perhaps looked at it a little more deeply, and I think my artistic revelation coincided perfectly with Ukraine,” Rondiak says. She believes her career as a psychotherapist, her role as a woman, as well as her own history also play a part: “Identity Interrupted is a metaphor for Ukraine. It demonstrates its indominable determined spirit.” 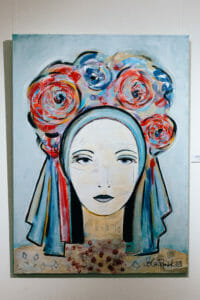 Currently showcasing at the Ivan Honchar Museum, Rondiak says organisers thought the exhibition was the perfect way to honour the 5-year anniversary of Maidan; inspiration for which certainly stems from that incredible time. But not only. “These issues go beyond Ukraine. For one thing it’s about women, and I think it touches on the basic human values of hope and determination, not unlike my grandmother’s story,” Rondiak relays.

The artist reminisces about her grandmother, how she lost everything and was sent to a female prison in Mordovia, Russia, following WWII. Using fish bones as needles, potato sacks as canvas, and threads from her own clothing, she created beautiful embroideries after long days of hard labour. 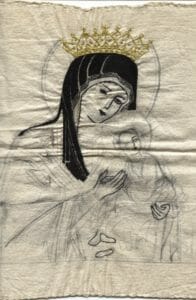 Released following Stalin’s death, she returned to her native Kolomiya and managed to smuggle her works out of Ukraine care of a priest who was travelling to the US. The embroideries found their way to Rondiak’s family in the 1980s. Included in this exhibition is one of her grandmother’s unfinished works.

As we commemorate five years of the Revolution of Dignity, this unique piece along with 52 other original works are on display until 9 December. Various other pieces will concurrently be on showcase at the Basel Art Context in the US next month. But this is only the beginning: Rondiak already has exhibitions lined up in Paris, LA, and Berlin for 2019. “I am surprised to see so many non-Ukrainians interested,” she says. But with “hope and renewal” at the heart of this collection, it’s not hard to see why they might be.