The Mitsibushi ASX is a fine-looking car, but there is more to this mid-sized SUV than just looks, it moves too

As we collect the ASX for our test drive, the first striking feature I notice is the deep red paintwork. While this isn’t a big car, relatively speaking, the red finishes it in a way that makes it look like it could be an aggressive beast, if needed. Once inside the car the cockpit adds to the sense that, once the engine is asked a question, there will be a reasonable response. 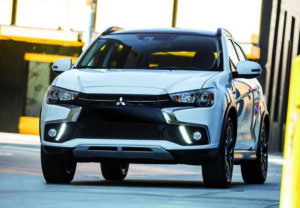 A sports car should have a tight feel, and the acronym “ASX” breaks down to reveal that this car is an Active Sports Crossover, with ‘sport’ right there in the title. The cabin is large enough not to feel cramped, but at the same time detailed enough for the driver to know the designers want you to feel like you’re in a sports car. The seats wrap around your back, the dashboard binnacles stand proud, and as we move off they offer an insight into what the engine is doing in response to my right foot. Taking off, is the answer.

The model of car is powered by a gutsy two-litre engine. As the ASX is not a big car, those two litres are more than enough to provide the kind of turn of speed that you sometimes need on Kyiv’s roads, i.e., to get yourself out of trouble and avoid a bang. The engine picks up and accelerates from low revs without a second thought; at higher speeds on larger roads there’s no sluggishness or lag when the car needs to ramp up the MsPH. 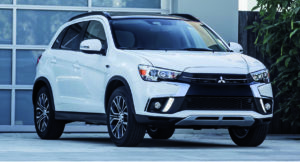 A Safe and Conscious Car

But this car isn’t just about turn of speed, this car has a few other tricks up its sleeve as well, because at the centre of the centre console is a button to electronically switch the driving mode from 2WD to 4WD. That little button makes it an ideal car for dealing with the seasonal driving conditions here in Ukraine: a nippy and easily-managed city car in the summer; and then a car capable of dealing with Kyiv winters, all wrapped up in one nice little package.

There’s more good news. As Mitsibushi have made a point of positioning their brand as a builder of smaller and more efficient cars, the ASX is the benchmark of environmentally-conscious (as much as an internal combustion engine running on fossil fuels can be, of course) vehicles. It’s even eligible for a tax break in Japan due to its “eco-friendly” status, and in Europe the car meets the stringent “Euro 5” standards related to the footprint it leaves in its wake. At the same time, with families in mind, the car is also super safe, having earned a 5-star safety rating from ANCAP in Australia. 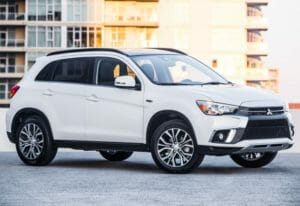 The bells and whistles we have come to expect from modern vehicles are all there too: there is a touch screen music console and plenty of controls at your fingertips on the steering wheel. The automatic gearbox can operate in semi-manual mode too, with flappy paddles behind the steering wheel allowing drivers who feel the need to get an extra element of handling and performance when and where needed.

The base model in the ASX range starts out at a touch over 20 000 USD, which is pretty good value, if you’re in the market for a new car this is one that should be weighed up in the mix. It’s a vehicle that can be enjoyed in all seasons, not a workhorse like the L200 or the Outlander, but a more sophisticated and comfortable option, with looks to match. 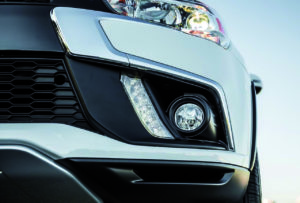 Stats for the Boys

Pros for the Girls