One of Kyiv’s attractions is more eccentric than you think!

From being the location for countless film productions to remaining one of the most famous streets in Kyiv (after Khreschatyk) – Andriivskyi  Uzviz has it all. The charming street has a rich history, with its antique buildings, the gothic Castle of Richard Lionheart at its base, and the stunning 19th-century masterpiece, St Andrew’s Church, towering over. Once home to the famous Ukrainian writer, Mikhail Bulgakov, many say the descent is a place of secrets, spirits, and lust. Read along as we rediscover the eccentric history of Andriiivskyi Uzviz.

Our journey on Andriivskyi starts some 2 000 years ago, when Apostol Andrii arrived to find untouched land (now Kyiv) and stuck a crucifix on top of a hill. With this, he proclaimed that a bustling, prosperous city would once come to occupy the area. And so, the hill was named Andriivska, and the newly announced street beside it took this name too. St Andrew’s Church allegedly stands on the same spot that Saint Andrii stuck his cross. You may have noticed that the church has no bells. According to legend, builders of the church feared that ringing bells on top of the hill would cause underground rivers to flood parts of the city – strange, right? 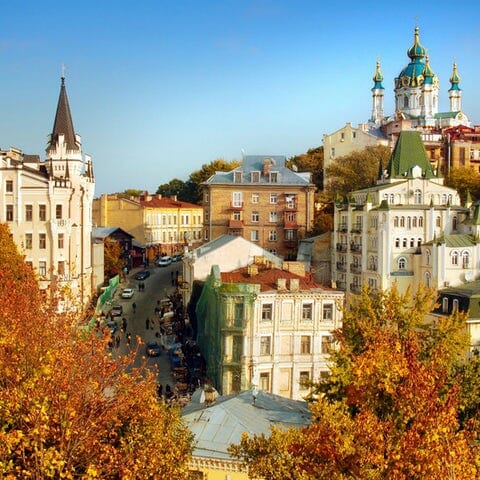 However, the church isn’t Andriivskyi’s only attraction; the other is one of mystery and murder – the allegedly haunted Castle of Richard Lionheart. The story goes that industrialist Dmitry Orlov commissioned the construction of the castle at a time of rapid urban development in Kyiv, in an effort to become an admired citizen of the city. However, in a turn of events, Orlov was murdered, leaving his wife and five children behind. His wife, Lydia Orlova, ended up completing the castle and selling it off. Once in the hands of its new owners, visitors reported strange howling sounds heard throughout the building, which quickly gave it the name “Castle of Ghosts”. The castle became a spectacle amongst Kyiv residents who grew to fear it and the spooky stories. However, it turns out that the noises were a result of wind passing through bad piping and venting ducts, which were purposely installed after Orlov’s wife ripped-off the workers.

Remnants of a Legend

Probably one of the most exciting places on the descent is the house of Mikhail Bulgakov. As the former residence of the internationally celebrated author, the house attracts the attention of many tourists and Ukrainians alike. His autobiographical novel, The White Guard, was actually set in this house, and few are aware that his gynaecological practice was located there too. Unfortunately, the house was later taken over by the Soviets and turned into a communal flat. In attempts to trace back the origins of Bulgakov, people searched through house No.13 and in there, inscribed a line from the novel. Ever since, it’s been called the Trubin house – named after the novel’s characters. 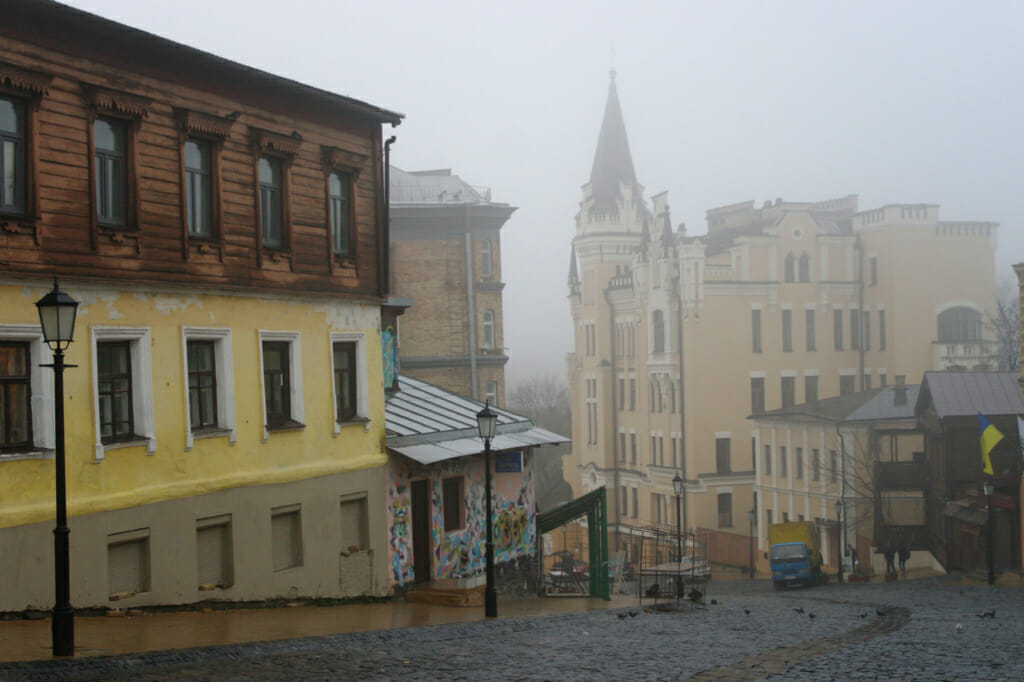 What was first a sacred place evolved into a red-light district, and now stands as a popular tourist destination. Crazy enough, these are only a selection of stories – you can only imagine how many other wild events took place on this historic street in Kyiv.