The Very Best in Ukrainian Film

A new independent creative space emerged in Kyiv this year to contribute to its already expanding and vibrant cultural scene. The Ukrainian Dance Theatre (UDT) is the country’s first progressive platform that aspires to achieve synergy of present-day choreography, drama, and art. And they do it with pizzazz.
UDT is the ambitious initiative of Anna Gerus, a winner of international competitions and festivals, and leading soloist at the legendary Kyiv Modern Ballet for 10 years. Their primary task is to help a young generation of talents unleash their potential here in Ukraine.  “Nowadays contemporary dance evolves quickly and encompasses a variety of styles and influences – from physical theatre to improvisation. We are always open to experiment. In this sense, UDT offers something unique – we invite other choreographers and dancers to cooperate with us and showcase their visions in multiple genres,” Gerus says. 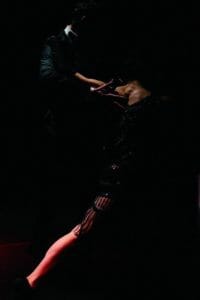 Officially UDT
On 3 and 4 March, UDT marked its official launch with two one-act neoclassical ballets featuring contemporary elements – Variations of Life and The Author. The first abstract piece has no concrete plot. Rather, its music-driven and technique-focused movements stir the audience’s mind with images of eternity, expressing itself in every moment of our existence.
The second shifts to storytelling and tells about a writer who, after a long pause, sets to work on a new novel inspired by hidden secrets from his past. However, the author gets so obsessed with his idea he cannot keep the creative process under control. Less outwardly expressive, every pas, wave of hand, turn of head, and tensed muscle of the dancers are meaningful, measured, and driven from within. Plasticity of the body and physicality of the performance generate a poignant visual component triggering various emotions in their spectators. “Our theatre also aims to educate and help the public perceive modern dance in its abundance ways and forms,” tunes in Michelle Fondue, UDT’s assistant choreographer.
In April, the team treated audiences to The Episodes, a series of mini shows staged by three different choreographers, including Anna Gerus. On 30 May, UDT will demonstrate another performance based on the ancient gnostic myth about Sophia, the Mother of Creation, who mistakenly plunges into darkness and gives birth to ugly Archons. Like it or loathe it, UDT’s bold projects set in motion a new chapter in the capital’s rich ballet niche.