What Should One Expect from the Festival Bouquet Kyiv Stage?

The festival, organized by “Dim “Master Klass” will be held in Kyiv on August 16-26 for the second time already. The entry is free.

The last weeks of summer should be filled with art and pleasant communication. For instance, you can enjoy a concert – jazz, classical, symphony or modern chamber one – somewhere in the open air. Or spend several evenings watching contemporary Ukrainian short films in an interesting location. And what about leisurely talks with persons symbolic for the Ukrainian and world culture conducted under a two-hundred-year-old ash–tree in the garden of “Sofia Kyivska”?

The festival of high art Bouquet Kyiv Stage, which opens in Kyiv already this week on August 16th and will last for eleven days, — has got an intensive programme in store for you. Over 25 concerts in 11 days, including a concert for parents with newborn babies. More than 70 films of the new Ukrainian cinema, over 50 works by Ukrainian artists, theatrical tours, a plastic dance master-class for senior citizens, interactive programmes for children and many other things.

Open-air Concerts in the Garden of “Sofia Kyivska”

A musical programme of the festival Bouquet Kyiv Stage is subdivided into two sections: each day the programme “Squares and Hills” starts at 6 p.m., and “Birds and Flowers” programme – at 9 p.m. Several late-night concerts have also been scheduled.

The festival opens on August 16th at 7 p.m. with “Marginalii” – a concert of Victoria Poleva’s music. It will be performed by Kyiv Virtuosi Orchestra conducted by Volodymyr Sirenko. The singing will be done by Nazgul Shukaieva, a performer with a rare voice range spanning from throat singing to soprano.

The evening music section “Birds and Flowers” is opened on the same day at 9 p.m. by a Norwegian musician Øystein Sevåg performing in tandem with a soloist Benedicte Torget. Sevåg’s music is described as a medium for meditation.

Attention should be paid to other guests of the festival as well – for instance, a young pianist Oleksii Hryniuk performing in the most prestigious concert halls of Europe, the USA, Africa and Asia, a violinist Andrii Bielov, who has successfully represented Ukraine on the high art stage, opera singers Tammy Hensrud and Nicholas Isherwood from the USA. These are also concerts of the ethnic band “DakhaBrakha” and “The Telniuk Sisters”, a performance of the pianist Yevhen Hromov, electronic bands Ptakh_Jung, Dz’ob and “Son Sovy”, and a closing concert of the New Era Orchestrа, which will be held on August 26th at 8 p.m.

«The most incredible voyage undertaken by mankind in the 20th century was to travel to the moon. Not only did man set foot there, but for the first time could turn around and see the planet Earth in her entirety, as a whole. This was to be an important turning point in human history. The fantastic photographs of our planet that were made available have had, and still have, an enormous implication on man’s consciousness and identity. We slowly began to realize that we are all a part of the same civilization. This acknowledgment nevertheless seems to be a long process. But if mankind could show the same courage by voyaging inwards towards his inner being as he has shown by exploring his external environment, our civilization would live in greater harmony. For this inward voyage, music can be an irreplaceable companion. It can bring us in touch with our inner consciousness where the recognition that we belong to a greater whole is stored. Music can melt what is frozen. Music can give us the strength to travel beyond our illusions, our intellect, and our emotions into the mystical experience where we finally see the pureness that is found within each of us. I believe music should be elevating. It should enrich our lives. It should serve as a vehicle to achieve freedom and connect us with what is good in all of us. The artist once had the role of delivering beauty to the people. He built bridges between this world and the mysteries beyond. Even today in the highest sense he is still needed.» 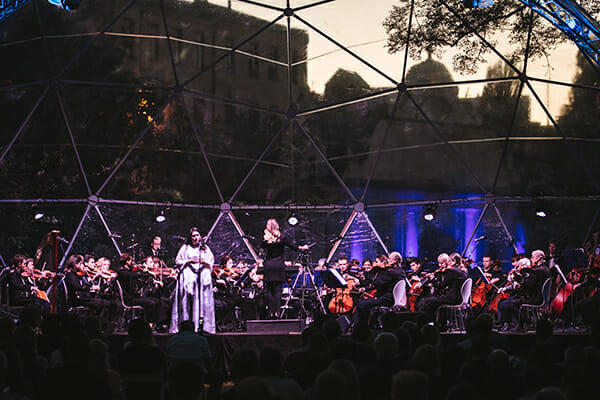 New Ukrainian Cinema in the Chamber Atmosphere of “Zoloti vorota”

On the whole – about 70 films made by over 60 Ukrainian directors. 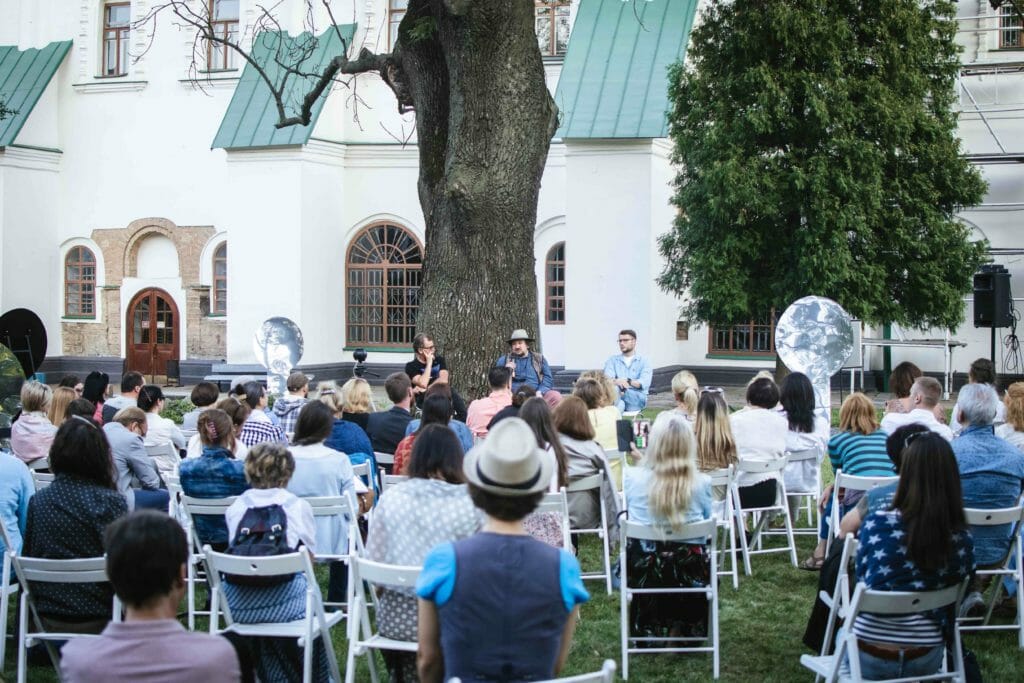 A visual programme of the festival comprises several projects at once. It is a collective art exhibition “Self-Portrait with Bouquet”, embracing 55 paintings made by 31 artists. And the “White Bouquet” exhibition of works by Oleksandr Dubovyk, a Ukrainian painter, graphic artist and monumentalist.

Kira Kuznetsova’s photo project “Five Minutes Before the Beginning…” will be displayed on the Art-Wall of “Sofia Kyivska”. It contains a series of portraits of the participants of last year’s Bouquet Kyiv Stage.

Also, Viktoriia Zubenko’s exhibition “Stop. Watch. Art” opens on August 18th within the “Visual Art” programme. The core of the exposition is formed by the line of objects, each of which bears a fragment of the patterns of mosaic panels, installed at the bus stops by the most famous Ukrainian artists of the 60-s of the XX century: Volodymyr Patyk, Mykola Andrushchenko, Alla Horska, Viktor Zaretskyi, Bohdan Soroka, Bohdan Soika and others.

Interactive projects for the whole family

At the festival, a Swedish artistic collective MELO will present interactive programmes for children and for autistic children, as well as a choreographic workshop for senior citizens.

A theatrical tour of “Sofia Kyivska” which starts at the New Drama Theatre on Pechersk is certainly worth registering for. A “Piano Concert Played with Two Hands” will be held at the initiative of BabyMozart on August 26th at 11 a.m. It is a concert for newborn babies and their parents. Also, creative master classes for children will be conducted at noon on August 17, 24, 25 and 26, teaching them to make origami out of music paper, create mystical cities, produce items of hay, etc.

Hard Talks Under the Ash-Tree

A series of hard talks under the ash-tree with renowned personalities representing different walks of life is one of symbolic projects within the framework of the festival. This year the guests of the festival include Øystein Sevåg, a Norwegian composer and musician; Benedicte Torget, a Norwegian singer and author of songs; Liubov Morozova – a music expert and music reviewer; Serhii Krutsenko – a composer, producer and director; Yevhen Holovakha, a sociologist and DSc in Philosophy, and others.

Price: one has to pay only to enter the territory of “Sofia Kyivska” and  “Zoloti vorota” — UAH 50.

Bouquet Kyiv Stage: The Return of the Arts Festival