Live Music, Nightlife, Things to Do

Chornobyl Gets the HBO Treatment

A fashion show that is out of this world, with music that touches your soul –
this is Beissoul & Einius

At the beginning of 2017, this Lithuanian duo presented their first collection which included looks made of glass. Their charismatic style is magnetic, so take a deep breath and prepare for the goosebumps – their appearance in Kyiv is upcoming and it’s going to be a feast for all the senses.

How was the concept born and brought to life?

The concept was born from the unwritten creed of our partnership: “do what you want”. Everything has been developing day after day, concert after concert, idea after idea. We didn’t have a specific destination, nor an idea of how we wanted to look and sound. Everything happened naturally, on its own, from sounds, fantasies, our world view, and what we would like to add to this world. You could even say that the electrofashion concept was picked from the US from billions of others.
Sometimes we experiment on ourselves: some experiments we leave in the past, and others stay as a root idea, and then we add some new ideas and looks. They are born without sketches or scripts. It’s like something uses us as a portal, information gets processed into sounds and objects. 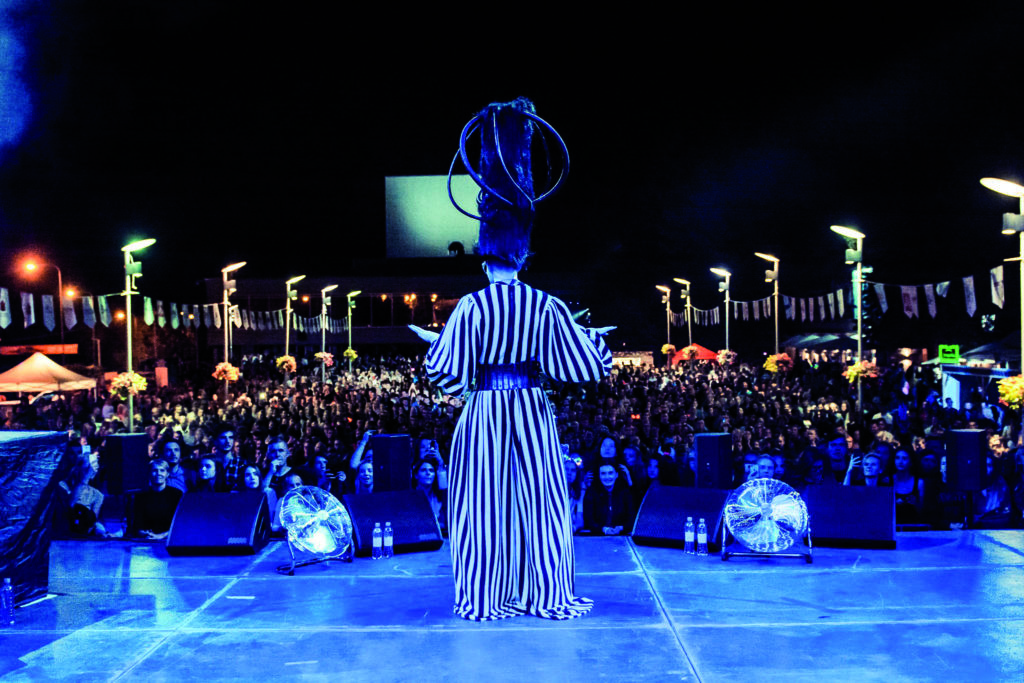 What do you see in your art and what are you trying to convey?

We see metamorphoses, changes, transformations, internal conflicts, and personal confrontation, with great heights, and with wide horizons. Electrofashion is for those, who don’t live in a limited space, or limited world. Our most important mission is to remove all stereotypes, replace them with some kind of prototype for the future world through music, fashion, movement, and energy. Those combinations give you an opportunity to change! You don’t get bored, you get stimulated! Finding new ideas and new concepts to try. Ours is an opportunity to engage music and fashion lovers, and also those who love art. That’s how we create our world with doors open for everyone.

Why Ukraine, why now?

Our appearance in Ukraine was a surprise for us too! Usually, most creators go west, because they think that will become their “life dynamite”. But in life there is no recipe. It seems to me that lots of people in the world have discovered Ukraine and looked at it with some sort of artistic eye. Maybe that’s because Ukraine is a country of contrasts – those unique buildings, castles, places that haven’t been experienced yet and are fresh to the world. Our concert on 16 May will become a presentation of our new album White Crow. This will be an emotional, deep and visual performance.

What is so important about this project?

This is the only space on earth where you can do anything you want, whenever you want – there are no rules. If you like something – you do it. But the main point is that ideas and dedication to them allow you to see the world, to travel. And also, the craziest people on earth are travelling with you, so you should be ready for anything!
One of our most marvellous trips was in a deep forest to radio telescopes in Latvia with our favourite Ukrainian photographer Dmitry Komissarenko. It was a photo shoot in the winter for magazine D’Scene. We arrived at night and had to sleep in a car. It was snowing pretty heavily so we had to push the car six kilometres into the forest and then back out. As soon as Dima took his camera out the snow stopped. Nature helped us with this job – no Photoshop could do what it did. It was unforgettable.

What’s next for you?