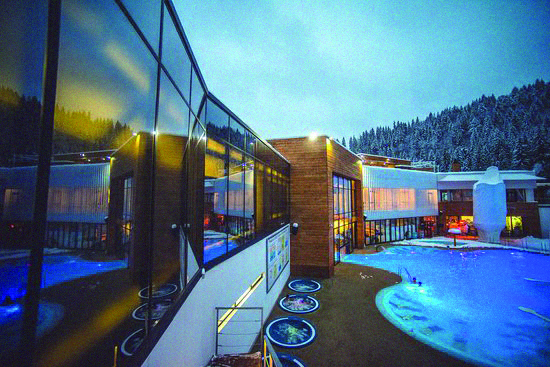 We don’t plan to overindulge during the holidays, it just sort of happens. To help with recovery and perhaps burn a little of the bulge, may we suggest a few days in Ukraine’s premier…sanatoriums? It’s all legit, and for a short unplug to get you back on track come highly recommended 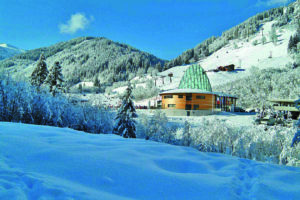 To western ears, the word ‘sanatorium’ conjures up places where people suffering maladies such as tuberculosis were isolated, confined, and (hopefully) treated. In the Soviet and post-Soviet space the term has a different meaning. In the USSR, the sanatorium was more health spa or resort, and retains a fading nostalgia. Whether you believe in the powers of mineral water and healing mud or not – Ukraine is host to many. If you have overindulged over the festive season they may be just what the doctor ordered. 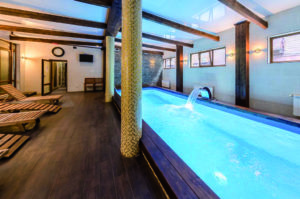 A visit to a Soviet-era sanatorium is like stepping back in time. Relics of another era linger in colourful mosaics glorifying Soviet workers; pot-plants dominate communal spaces. Sparsely-furnished guest rooms feature mostly single beds, harking back to a time when guests travelled to sanatoriums alone. Mealtimes feature food in more shades of beige than you can imagine – all the more for focusing on the business at hand.

The treatments are hard-core: there are few delicate facials offered. Instead they range from radon-water douches and oil baths to magnetic sands and underground salt caves. Things are more lax these days but once sanatorium life was strictly regulated, watched by staff to a strict regimen.

At their height, these sanatoriums hosted millions of USSR citizens each year, courtesy of the state. 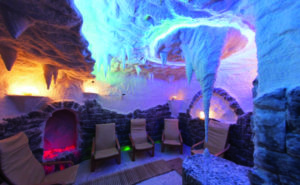 Productive use of free time was something Soviet leaders focused on to define ideal citizens. The purpose of a sanatorium was solely for rest and recuperation (a tradition that lingers with the resort culture so loved in this part of the world, meaning tourists never venture out of resorts). A mix between medical institution and spa, sanatoriums were an integral part of the Soviet social and political apparatus. The USSR’s collapse in 1991 struck fatal blows, leaving many of them boarded up and abandoned. Only the best survived.

Western spa culture has fostered consumers less interested in the medical element of a sanatorium stay. Surviving sanatoriums have bowed to consumer demand, incorporating western treatments alongside traditional Soviet-style therapies. They face an uncertain future but offer a unique experience.

Here’s four of the best according to visitor ratings. All claim to treat inter alia: digestive, gynaecological, endocrine, urological, respiratory, neurological, cardiovascular, and motor disorders. With the temporary loss of Crimea to Russian occupation most available places are located in western Ukraine.

Resort complex Riksos-Prykarpattya, about 80 km south-west of Lviv, is a sanatorium specialising in the treatment of gastrointestinal disorders, as well as those of the musculoskeletal system. If you’re feeling a little bilious after festivities this offers a solution. Rated five-star, the treatment and diagnostic base is of the highest standards. It works on an “all-inclusive” format, with a luxurious spa, mini-water park, several pools, a gym, and more.
A stay starts at 2 745 UAH/night

Mirotel Resort and Spa, is one of the leading health resorts in Truskavets. A leading cardiovascular sanatorium, it also boasts gynaecological, dermatological, urological, and musculoskeletal treatments. In addition to the advanced medical diagnostic base, it has an excellent spa centre, pool, and gym.
A stay starts at 3 173 UAH/night

Solva Resort and Spa is located in the balneological resort Polyana, 30-odd km south of Lviv. Guests are surrounded by high comfort; the health centre offers use of the spa, a mineral water pump room, and exercise equipment all set against the stunning backdrop of the Carpathians, and the resort is famous for its healing mineral water Polyana Kvasova.
A stay starts at 2 246 UAH/night

Some 85 km from Lviv and home to the famed mineral water Morshynska, there is the reputable, but inexpensive sanatorium called Marble Palace. Its name comes from the fact it is a great example of Soviet Modernism architecture – more than ten types of marble were used in its construction. The mineral water pump-room is one of its main attractions alongside a healing mud bath.
A stay starts at 2 100 UAH/night.

Those are just our pics. For a greater rundown check: www.naftusia.com/ru/ukraina/vse-sanatorii