Sailing in All Winds

As the World Cup has shown, football is a powerful platform for bringing people together. Can it be used in Ukraine to rebuild ties between war-torn friends and internally-displaced neighbours? Yes. It already is.
With nearly half the world’s population – some 3.5 billion people – tuning into the 2018 FIFA World Cup this summer, football has once again shown its ability to draw people together. It’s like a common language that we all speak, from the dusty pitches of Djibouti to Russia’s glitzy World Cup venues. Ukrainians love of the beautiful game has left them torn this summer. To tune in or not to tune in – that has been the question.
For budding football fans like 9-year-old Darina Yakovleva, though, there are bigger questions to be answered. “At home, they don’t allow us to play football,” Yakovleva, an internally displaced person (IDP) from Eastern Ukraine, says. “But in the backyard, we all play it.” This is exactly why international organisations, non-profit groups, and sports teams alike have leveraged the sport to promote peace right here in Ukraine.

Bittersweet Euro 2012 memories
Watching Belgium’s thrilling comeback win over Japan in the Round of 16 was bittersweet here in Ukraine. The throngs of jovial football fans celebrating at the sparkling new Rostov Arena – located just 200 kilometres from war-torn Donetsk – stand in stark contrast to the echoes heard at Donbas Stadium, the place Darina and her family used to regularly watch Ukrainian champions Shakhtar Donetsk. The jewel of the Ukrainian Premier League when American superstar Beyonce opened the facility in 2009, it was refurbished ahead of UEFA’s Euro 2012 as part of an infrastructure upgrade that included a beautiful new terminal at Donetsk Airport. It hosted five games, including the tense semi-final that saw Sergio Ramos’ Spain get by Cristiano Ronaldo’s Portugal on penalty kicks. Ramos and Ronaldo were in Russia this summer, while the airport now lays in ruins. A powerful reminder of one of the most devastating battles of the ongoing conflict. The team, like nearly two million Ukrainian citizens, is now displaced due to the conflict. 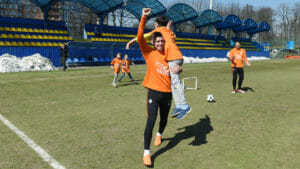 In Ukraine, Football is King
In terms of popularity, football is king in Ukraine. No sport brings the country closer together. “Football is a game that is accessible and unites everyone – adults and children, girls and boys,” says Ukrainian Minister for Sports and Youth, Ihor Zhdanov.
There are nearly 700 000 registered football players in Ukraine, and another 1.5 million that play for fun. It’s easy to see why. Dynamo was a Soviet League powerhouse with 13 domestic titles, two UEFA Cup Winners’ Cups, and seven starters on the silver medal-winning Soviet squad at Euro 1988. Dynamo and Shakhtar have claimed 26 of 27 titles between them since independence, their players becoming fixtures on the Ukrainian national team and household names. “I really wanted to meet (Ukrainian national team goalkeeper) Andriy Pyatov,” says Yakovleva, who had the chance to meet her idol earlier this year. “It was fun and interesting to play with him and now I have photos of him and autographs!”

More Than Football
As Eastern Ukraine’s favourite team, Shakhtar has worked to connect with their war-afflicted fans through European Football for Development (EFDN) programmes like Come On, Let’s Play and #MoreThanFootball Action Weeks. Through Come On, Let’s Play, the team has set-up safe places for kids aged 7 to 12 to play football in the frontline Donbas cities of Kramatorsk, Severodonetsk, and Kurakhove, as well as Lviv, the team’s former home, and Kharkiv, the team’s current home. The team has reached 2 180 youngsters since 2013, trains volunteer coaches, and provides equipment like footballs, cones, and whistles.
Held by some of Europe’s biggest teams, like Barcelona, Juventus, and Chelsea, #MoreThanFootball events are held across Europe to combat discrimination and promote inclusion. In Ukraine, Shakhtar used the event as an opportunity to work directly with IDPs. The team welcomed dozens of displaced kids to a training session, allowing them onto the field to meet their heroes and play some footy. It was the chance of a lifetime, remembers Darina’s grandmother Lyudmila Yakovleva. “For the girls, Andriy Pyatov is No. 1 and today their dreams came true,” she recalls. “The guys are not only good footballers, but also wonderful people.”
For Pyatov, the feeling was mutual. “We are always glad to meet with fans, even more so as they are displaced kids from Donetsk,” he says. “We try to provide them with assistance by giving them gifts, clothes, and some joy and positive emotions.” 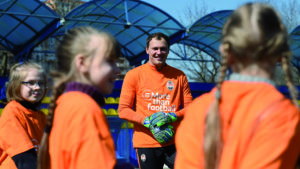 IDPs + Football
That football resonates with Ukrainian youth is nothing new to Ukrainian Football Federation (UFF) President Andrii Pavelko. “It is vitally important that all children are able to play sports,” he says, referring to those affected by the conflict in the east. Danish charity Cross Cultures Project Association uses football and reconciliation classes to promote dialogue among youth through Open Fun Football Schools. To date, nearly 125 000 young Ukrainian IDPs from 28 communities have participated in football trainings, excursions, and psychological and social support.
Many groups use football tournaments to build a sense of community, like Ukrainian NGO Ukraine – Path of Unity and UNICEF’s EmPower Girls Football Cup, which attracted 5 000 girls from Eastern Ukraine last year. Some youth even get the chance to bring the message of peace abroad. The FC Dnipro Reserves won Football for Peace’s prestigious Sait Nagjee Football Tournament in India in 2016, while a Children’s Football for Peace initiative sent a team from Volnovakha to Budapest this year, where they were excited to meet Hungarian pop star Joci Papai, familiar to the kids from his performance at Eurovision 2017 in Kyiv.

Football for Peace
From ‘Olympic Truces’ during the Ancient Olympic Games to World War I soldiers throwing down their weapons to kick around a ball during the ‘Christmas Truce’ to Ivory Coast captain Didier Drogba’s impassioned speech that helped end his country’s civil war, the idea of using sport for peace isn’t new. UN peacekeepers regularly use football for peacebuilding in war-afflicted areas, while FIFA donated $225 000 to purchase 1 200 sports kits for 12 countries affected by war, including Colombia, Afghanistan, and Bosnia. Colombia is a prime example of a country using football to promote peace. Just two years after ending its own 54-year civil war, the Colombian Football Federation has financed sports camps, post-conflict education, and peace training. A professional team featuring players from both sides of the conflict, La Paz FC, was even created – a model that could be ideal for replication in post-conflict Ukraine.

Beyond the World Cup
So as the curtains close on another World Cup and the world’s eyes turn away from this region – again, it is important to remember the sense of community that football can engender. The champions will surely be a united team that achieved a common goal by working together, an analogy very much appropriate for organisations working to assist those affected by war. “Football helps families displaced from Crimea and Donbas adapt to new environments and get along with other children,” says Pavelko. “It proves that football is an efficient tool to bridge even the smallest of gaps and inequalities.” Ukrainians may dream of the days when Shakhtar vs. Dynamo will again be the biggest rivalry in Ukraine, but when Andriy Pyatov suits up for the Ukrainian national team in the Nations League game against the Czech Republic on 6 September, the entire country – and especially young Darina and her friends – will rally behind him. It’s a poignant reminder of football’s ability to bring people together, unite behind a common cause, and heal past grievances. After all, as the star goalkeeper reminds us, “Football is a game for everyone.”

“Football is a game that is accessible and unites everyone – adults and children, girls and boys”