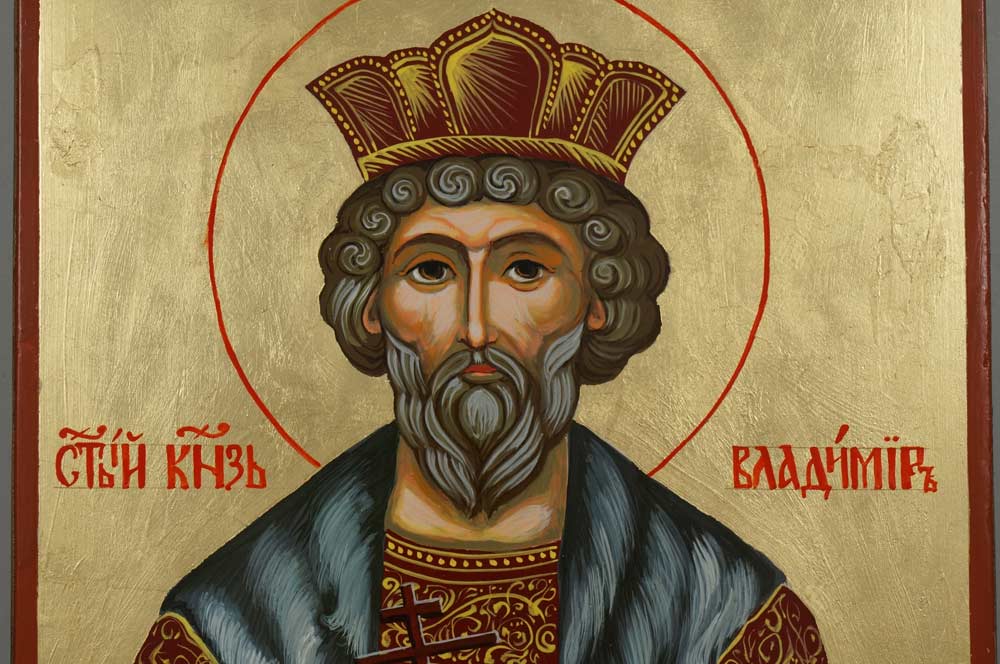 In historical monarchic terms their reign was brief – about 500 years – but the territory of modern Ukraine was once the seat of power of what was then Kyivan Rus. Before them came the Scythians, the Greeks, the Goths, the Huns, the Bulgars, and the Khazars, it was only in the 9th century that Kyiv became a seat of power in its own right. However, in this age of empires, what is now Ukraine would cede to foreign domination again from the 14th century and for the next 700 years. What’s On looks at the brief reign of rulers of a territory that has possibly changed hands more than any other in Europe. 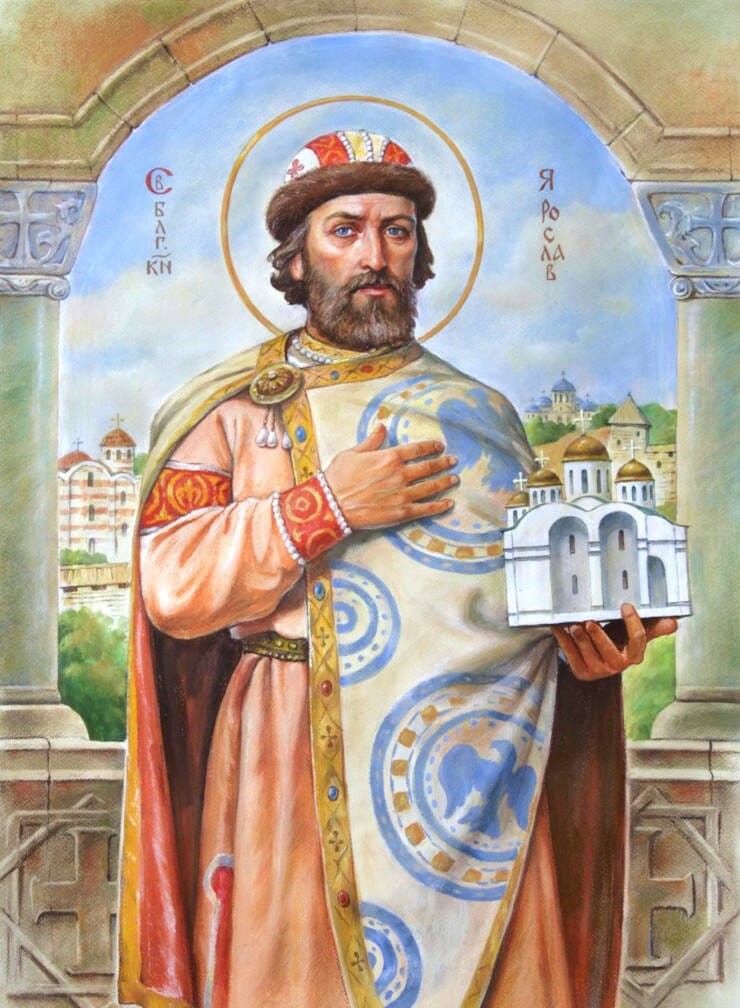 Kyivan Rus was founded by the Rus people, Varangians who gradually moved south integrating with Slavs and reaching Kyiv at about 880. Kyivan Rus included the western part of modern Ukraine, Belarus, with a larger part of it situated on the territory of modern Russia. During the 10th and 11th centuries, it became the largest and most powerful state in Europe. In the following centuries, it laid the foundation for the national identity of Ukrainians and Russians.

Kyiv became the most important city of the Rus. It was short-lived – the 13th century Mongol invasion devastated Kyivan Rus and Kyiv was totally destroyed in 1240. On today’s Ukrainian territory, the state of Kyivan Rus was succeeded by the state of Galicia-Volhynia – one of the most powerful states in east central Europe and a succession of other powers. As with the tale of all monarchies, their rule was punctuated by blood, scandal, intrigue, and greed.

Although some historians dispute his rule and its timeline, the traditional view is that Oleg was a Varangian prince who ruled all or part of the Rus people in the early 10th century. He is generally seen as a relative of Rurik, a Varangian chieftain who founded the Rurik Dynasty which ruled Kyivan Rus. Oleg’s “seer” label applies to his apparent ability to foretell the future. He is credited with moving the capital of Rus from Novgorod to Kyiv and, by doing so, he laid the foundation for the powerful state of Kyivan Rus. Rurik entrusted Oleg with the care of his young son Igor as well as his kingdom, and as such was the Rus’ supreme ruler for 30 years.

It appears he was as crooked as a dog’s hind leg, leading, ultimately, to his grisly demise. Igor was son of Rurik, the first king of Kyivan Rus, and Oleg’s likely nephew. Igor was killed while collecting tribute from the Drevlians, a tribe of early East Slavs, in 945. The Byzantine historian and chronicler, Leo the Deacon, describes his death: “They had bent down two birch trees to the prince’s feet and tied them to his legs; then they let the trees straighten again, thus tearing the prince’s body apart.” The Primary Chronicle blames his death on his greed, indicating that he was attempting to collect tribute a second time in a month.

She might be a saint but she was also one tough bitch – ruling with an iron-fist, she is alleged to have burned enemies alive to avenge her husband Igor of Kyiv’s death. When Igor died, their son, Sviatoslav, was a 3-year-old, making Olga the official ruler until he came of age and she protected her son’s claim with military support. She was the first Rus ruler to convert to Christianity (maybe to cleanse the blood from her hands), either in 945 or in 957. Olga was one of the first people of Rus to be proclaimed a saint, for her efforts to spread the Christian religion in the country but, ultimately, she failed, her son remained staunchly pagan. 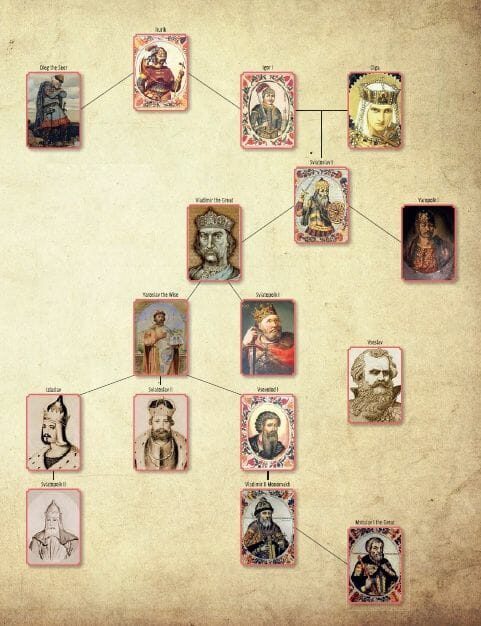 Sviatoslav I or Sviatoslav the Brave
Ruled 945–972

He used his power to score, fathering children to several women. In between times, he did a bit of land grabbing. After his accession to the throne, Sviatoslav expanded Rus control over the Volga valley and the Pontic steppe region. His greatest success was the conquest of Khazaria, which had been one of the strongest states of Eastern Europe for centuries. His sons include Yaropolk I, and Oleg, (both to unknown mothers) and he fathered with wife Malusha, Vladimir the Great. Not known as being a great statesman, his failure to establish a stable succession led to a fratricidal feud among his sons, resulting in two of them being killed.

The oldest son of Sviatoslav, soon after his father’s death war began between Yaropolk and his brothers. According to one source, Yaropolk’s brother Oleg killed Lyut, the son of Yaropolk’s chief adviser Sveneld. As revenge and at the insistence of Sveneld, Yaropolk waged war against his brother and killed him. Then, he went after his other brother sending troops to Novgorod, from which Vladimir had fled on hearing of Oleg’s death. Vladimir was to come back in 980 with backup from Varangian mercenaries and did a bit of wife-stealing along the way. Vladimir seized Polotsk because Rogneda, daughter of the Polotsk prince, had chosen Yaropolk over him. He then forced her to marry him. Then, in an act of cunning, Vladimir seized Kyiv with the assistance of the boyar Blud, then Yaropolk’s chief adviser. Blud was two-faced and betrayed Yaropolk by advising him to flee to the town of Rodnya. Vladimir then besieged Rodnya and starved Yaropolk into talks. Yaropolk trusted Blud and his brother’s peace promises and left for Vladimir’s headquarters, where he was killed in an ambush.

The apple never falls far from the tree, and like his dad, Vova liked the ladies. As a pagan he took 800 concubines (along with numerous wives). Due to this he fathered 13 sons and not less than 10 daughters. Still, he found time to conquer territory as well as women. By 980, Volodymyr had consolidated the Kyivan realm from modern-day Ukraine to the Baltic Sea and had protected the frontiers against incursions of Bulgarian, Baltic, and Eastern nomads. Then he found God. Vladimir converted to Christianity in 988 and later Christianised Kyivan Rus. In death he was carved up like a Christmas ham with the various parts of his dismembered body distributed among his numerous churches where the body parts were venerated as relics.

Probably the eldest of Vladimir’s sons (his parentage has been questioned), Sviatopolk started his rise to power early – as an 8-year-old when Vladimir put him in charge of Turov. Later, Vladimir arranged his marriage with Polish King Boleslaus I’s daughter. The princess came to Turov together with Reinbern, the Bishop of Kolberg. He then turned on his dad, encouraged by his wife and Reinbern, Sviatopolk prepped for war against Vladimir. Vladimir found out (as parents are wont to do) and jailed all three. Shortly before Vladimir’s death, Sviatopolk was freed and sent to govern Vyshgorod. When Vladimir died in 1015, Sviatopolk seized power and rapidly dispensed with three brothers earning him the nickname “the Accursed”. News of the triple homicide reached Sviatopolk’s younger brother Yaroslav, Prince of Novgorod, who waged war against Sviatopolk in 1016. Sviatopolk was defeated and fled to Poland. In 1018, he returned, defeated Yaroslav, and seized Kyiv. Yaroslav decided to go to war against Kyiv again and Sviatopolk was defeated and fled to the steppes. Again, he returned to attack Yaroslav, but was again defeated and fled towards Poland, dying on his way.

Vladimir the Great’s son, he was vice-regent of Novgorod at the time of his father’s death in 1015, and upon coming to rule Kyiv he united the two principalities. Under Yaroslav the codification of legal customs and princely enactments began, and this work served as the basis for a law code called Russkaya Pravda (Rus Truth, or Law). During his reign, Rus reached the height of its cultural and military power. While history paints a generally favourable picture of him, he is alleged to be complicit in his brothers’ murders and locked a younger in jail for life. To cement his power, he had a habit of marrying off his daughters to foreign princes. He sponsored the construction of the Saint Sophia Cathedral in 1037.

Here’s where it gets complicated. Deposed twice, you’ve got to give him top marks for persistence. There is some dispute as to whether Vladimir was born by Yaroslav the Wise’s first or second wife, Ingegerd. Regardless, Iziaslav succeeded his father, after Yaroslav’s oldest child, Vladimir, predeceased his father. Upon the death of Yaroslav, his realm was divided between three of his older sons, Iziaslav, Sviatoslav, and Vsevolod, creating the Yaroslavichi triumvirate that ruled for 20 years. Iziaslav continued his father’s work and was one of the authors of part of the first legal code of Rus. He is also credited with founding the Kyiv Pechersk Monastery. As a result of an uprising in 1068, Iziaslav was deposed and fled to Poland. In 1069, he retook Kyiv but was ousted again by his brothers in 1073. Iziaslav became the first King of Rus in 1075 when the Pope sent him a crown. He succeeded in retaking Kyiv in 1076.

Whether he could do magic or foretell the future is debatable, but he was a jailbird courtesy of continued raids on Iziaslav, Sviatoslav, and Vsevolod’s territory. He was then freed by the crowd during the Kyiv Uprising of 1068 and proclaimed grand prince of Kyiv Rus, forcing Iziaslav to flee to Poland. Returning with an army seven months later, Iziaslav retook his throne, and Vseslav fled back to Polotsk.

Upon his father’s death in 1054, Sviatoslav joined his brothers Vsevolod and Iziaslav in forming the triumvirate that oversaw the affairs of Kyivan Rus’ until 1072. The following year things turned sour and the triumvirate broke up, when Sviatoslav, supported by his younger brother Vsevolod, dethroned and replaced Iziaslav and ruled until his death in 1076.

A lover more than a fighter, upon Sviatoslav’s death in 1076, it was actually Vsevolod who was next in-line to the throne, but he handed it back to Iziaslav in return for patrimony of Chernihiv. Iziaslav died two years later, and Vsevolod took the throne again. Since he lost most of his battles, his eldest son, Vladimir Monomakh, a famous warrior, did most of the fighting for his father. The last years of his reign were clouded by illness, and it was Monomakh who pulled most of the strings.

Despite a 20-year reign, he was not a popular prince, and his rule was marked by rivalry with his cousin Vladimir Monomakh for the throne. He was also reputed to be a bit of stirrer, encouraging fighting between other princes in neighbouring realms.

Vladimir II eventually did get his chance to rule when Sviatopolk II died and the populace revolted summoning Vladimir to the capital. He is considered to be the last ruler of the united Kyivan Rus. He liked to boast of his achievements and in his famous Instruction (also known as The Testament) to his children, Monomakh claims he led 83 military campaigns and made peace with the Cumans – nomadic warriors of the Eurasian steppe some 19 times. The Instruction also details his social reforms that did lead to a period of stability and last bloom of Rus, which would fall apart 10 years after his death.

Vova II’s son is the last ruler of united Rus and liked to wage war and build churches. He would battle Cumans, Estonians, Lithuanians, and his relatives. In 1096, he defeated his uncle Oleg of Chernihiv thereby setting the scene for the centuries-long infighting between his and Oleg’s descendants.

Kyivan Rus would limp on for another century, disintegrating into various rival regional powers before it all came to a brutal and bloody end with the arrival of the Golden Horde – a Mongol Khanate in 1240. Ukraine would not be a nation in its own right again until 1991.