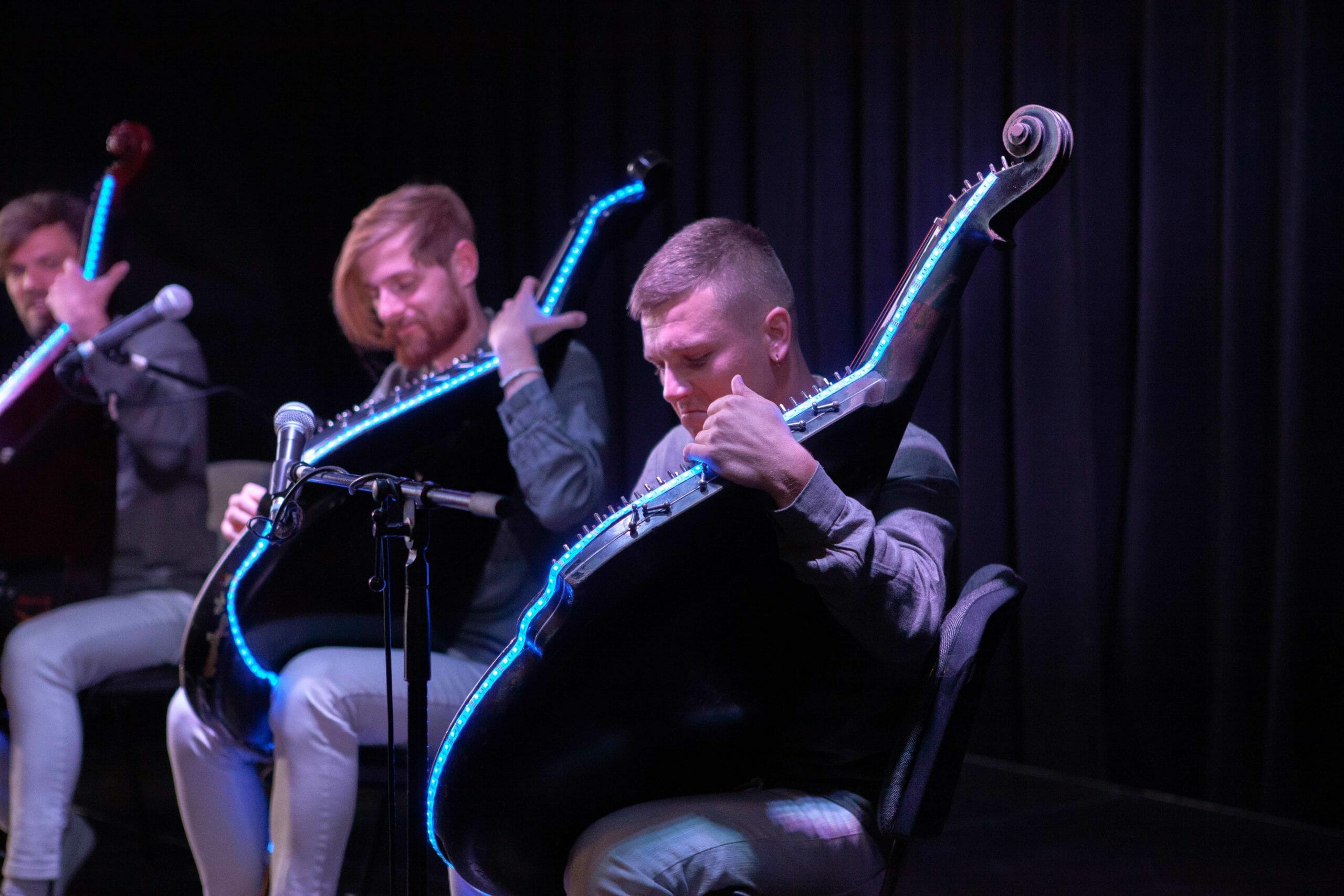 These days, it’s not uncommon for bands to experiment with traditional culture – just think of Go_A (who were to represent Ukraine at Eurovision 2020, now postponed to 2021). However, Shpylyasti Kobzari were doing it before it was cool. 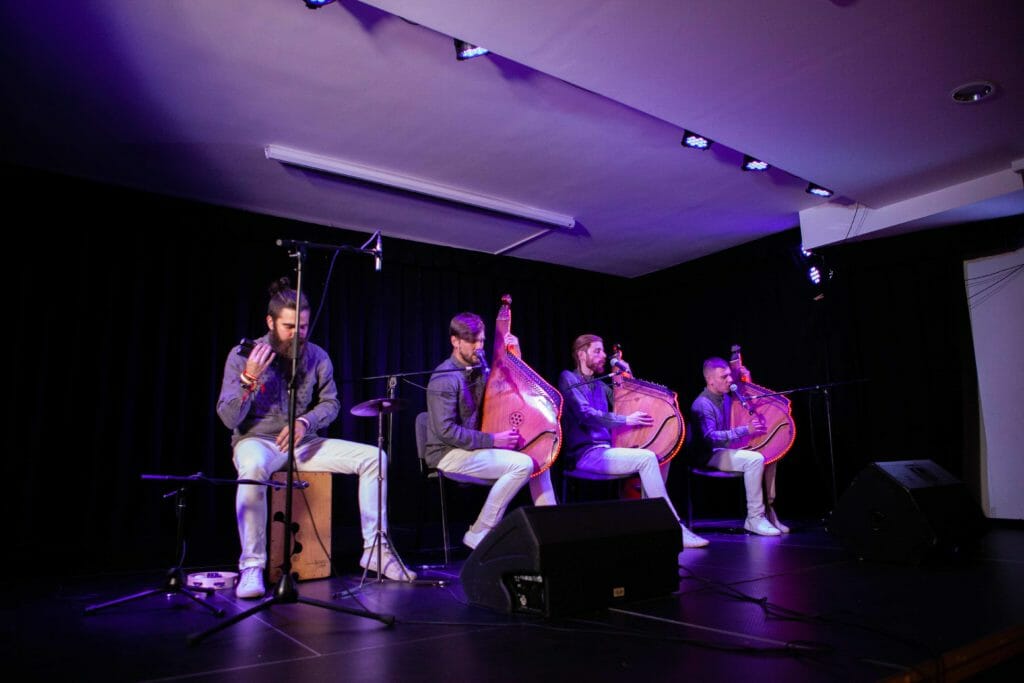 Volodymyr Vikarchuk, Yaroslav Dzhus, Yurii Myronets, Serhii Potiienko, Danylo Nosko, and Yaroslav Velykyy were united by their love for Ukraine and for music, so they formed a band: Shpylyasti Kobzari. Their story started 80 kilometres from Kyiv, at a music college – the world’s only College of Kobzar Art.

The instrument of the kobzars is the bandura: a true symbol of Ukrainian culture. Many students at the college have been playing since childhood, and have a deep bond with the instrument. Shpylyasti are a bit of an exception; they discovered the instrument later in life.

No other plucked string instrument comes close to the dynamic range and unique sound of the bandura. As Yaroslav Dzhus points out, it’s comparable to the piano in terms of the sheer number of strings (a bandura has 65). Yet a piano is a struggle even for three or four people to carry, while a bandura is as light as a guitar – it’s every guitarist’s dream. In fact, guitarists such as Mike Rutherford of Genesis and Chris Squire of Yes experimented with their instruments to create two- or even three-neck guitars, only to find that their complex creations weren’t too practical. What they really needed was a bandura. 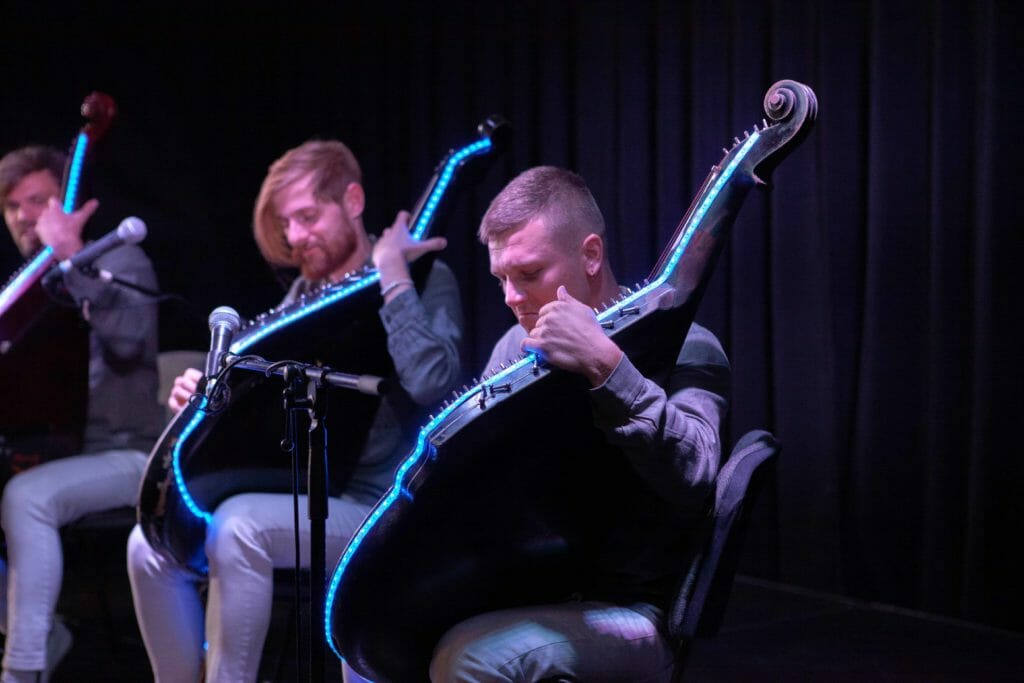 The bandura is a relatively young instrument that is not produced by any of the world’s major instrument manufacturers – however, several musicians are currently working on making an electric version. Needless to say, converting a 65-string acoustic instrument with a four-octave tessitura is no easy task.

Shpylyasti made their way to the world stage after a lot of small-time gigging and intense practice. Performing on shows such as Ukraine’s Got Talent and The Voice, they have now become famous worldwide. They have performed all over Ukraine and in almost every country in Europe, as well as Lebanon, Iran, Saudi Arabia, Canada, the USA, and even China – all this in a mere 9 years.

During the revolution of 2013-2014, they gave numerous performances for protesters, later also performing for soldiers fighting in eastern Ukraine.

Every band has a driving force, a purpose or a message that they want to convey to their audience. Shpylyasti’s is to show that the bandura isn’t an instrument of the past: it’s young, versatile, and yet to be discovered.

That versatility is key: it’s what allows Shpylyasti to experiment with sound, cover modern hits, and compose new music. In one night, they go through a diverse repertoire, from folk songs to modern rock and pop, redefining the common perception of the bandura. Their motto “Бандура – це круто” (“The bandura is cool”) reflects that to the fullest. Their fans like to respond with “you guys are cool” – and rightfully so. In their case, presentation is key. If you’re used to seeing the bandura played by an elderly balladeer outside a church, then the energy of Shpylyasti’s live show is likely to blow you away.