Wisdom is in the Head, Not the Beard

The motanka doll is one of the most ancient of Ukrainian, handmade household items. Initially fashioned as a domestic symbol of fertility and procreation, these figurines played an important role in the everyday life of early Ukrainians. While still in use today, the tradition has become one more concerned with style and décor than anything magical. Today, perhaps, this art is necessary than ever before 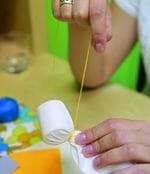 There are many traditions associated with the motanka, one of which is that not a single stitch is used. Its name, “motanka”, means that everything is wound or spun, and therefore needles are not necessary. Natalya Katrychenko, a master in the art, explains, however, that while embroidery may have gone into decorating elements of the figurine, the doll itself has no seams. “An old belief states that one can sew up both good and evil thoughts. It’s one of the reasons the doll should never be touched with a needle,” she reveals.
Today, we’ll be making a simple version of the ancient tradition, which means our doll will have no embellishments or decorations, like embroidery, braids, or wreathes. There is little in the way of materials: various pieces of fabric, three spools of different coloured thread, and…the hands of the master. I almost don’t believe that these simple items are going to somehow create a doll.

• 1 15x30cm piece of linen or other natural fabric 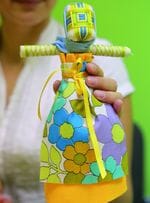 • The first stage involves making the head. For this, we take a piece of natural fabric (approximately15x30cm), such as linen or hemp (or, according to tradition, any scrap of fabric you might have in your house), and fold three times. The width of the folded fabric should be approximately 5cm. Roll this tightly. Natalya’s sister Tetyana says this fabric should be quite thick, so that the head itself will have a solid look and feel to it.

• Once this is finished, take another piece of white fabric (also 25x25cm) and cover the “head”. The finished product should resemble a lollipop wrapper, which we fasten by winding thread around the “neck”. “This is basic motanka technique – the ends of the thread need not even be tied,” explains Tetyana, “as the construction is quite solid.” With the head fastened, we are ready to move on to its decoration.

• As per tradition, the motanka doll has no face. Instead, threads are crisscrossed over one another. Our Ukrainian ancestors believed that it was this symbol that protected the house, as well as the doll’s owner. Today, the cross remains. However, designers endeavour to embellish the ancient symbol by including additional colours and patterns.

Tetyana has chosen three different coloured threads. Beginning with the yellow, we wind it around and across the head so that a nice, even cross appears in just the middle of the face. Natalya says the combination of colours is up to the one making the doll. Ours has a beautiful yellow, blue, and green combination.

• With the head complete, we move on to the arms. Here, we take another piece of fabric, approximately 14cm wide and 30cm long. Rolling the fabric tightly, thread is wound around the middle of the roll to the edges to keep its form. Fixing the arms to the body, thread is then wound round the neck.

• Moving on, the body is made of several layers of fabric of different colours. For the inner layer, we take a piece of white cloth, 20cm wide and as long as you like. You can opt for a wider piece of material, just remember – the wider the fabric, the thicker the body. With the material in place, the thread is brought out again, and wound round the midsection to keep it fastened.

• Approaching an almost complete motanka doll, a few more layers of material are added to the body to give it a nice thick feeling. For our doll, we alternate between a solid yellow fabric, fixing it with thread, and a patterned piece of material (smaller in size – 10x15cm), which makes it look like the doll is wearing an apron. Once all pieces are in place, thread is wound around the middle once more, holding all of the pieces of material tightly together, at which point a pretty bow ties it all together.

• The final stage sees a small triangular-shaped piece of material (a folded piece, 20x20cm) tied around the head, making it look as though the doll is wearing a shawl. Our motanka is finished, and she is beautiful, elegant even. I can’t believe how quickly it has come together – just 40 minutes!

Of course, as previously mentioned, we have created the simplest kind of motanka doll. For exhibitions and special occasions, such as weddings or baptisms, the Katrychenko sisters can spend up to a week on just one doll. And I can see why – these dolls are indeed stylish pieces of art.

Beliefs about the Motanka

• Ancient Ukrainian motankas had strong ritual meaning – a girl looking for a groom would make her motanka while singing wedding songs.

• A motanka would be given to a child whenever he or she got sick. Ukrainians used to believe that the doll would take away the illness.

• There was a time when motankas could be found in almost every Ukrainian home – it was believed that they protected the house.