You have to admire participants in KyivPride for their bravery. It is an event ringed by police to protect the marchers from those who oppose them. “Imagine being attacked on the street because of your hair colour or for holding the hand of your fiancée…” With this, Olga Sumskaya is proud to talk KyivPride 2019 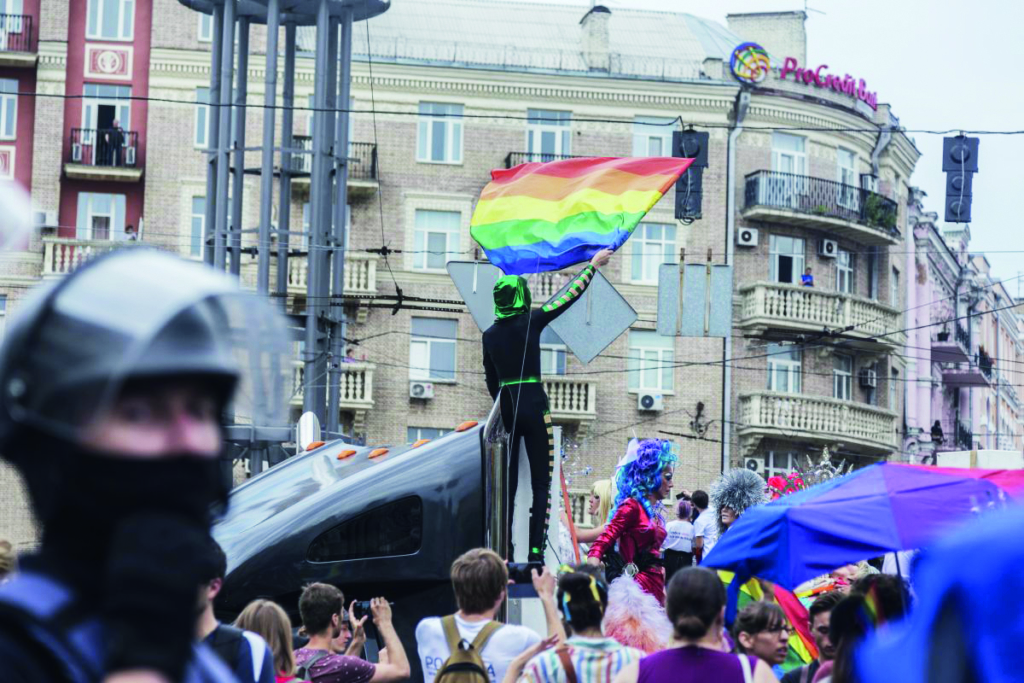 Despite religion being suppressed in the Soviet Union, people in Ukraine have resolutely held on to their faith, part of which espouses traditional family values. As such, discussion on homosexuality going against the norm or even being a disease still prevails today. For many looking to be nothing more than their true selves, life is a battle. This is where KyivPride comes in. As a week-long celebration over 14-23 June, festivities come to a close with the traditional equality march on 23 June. 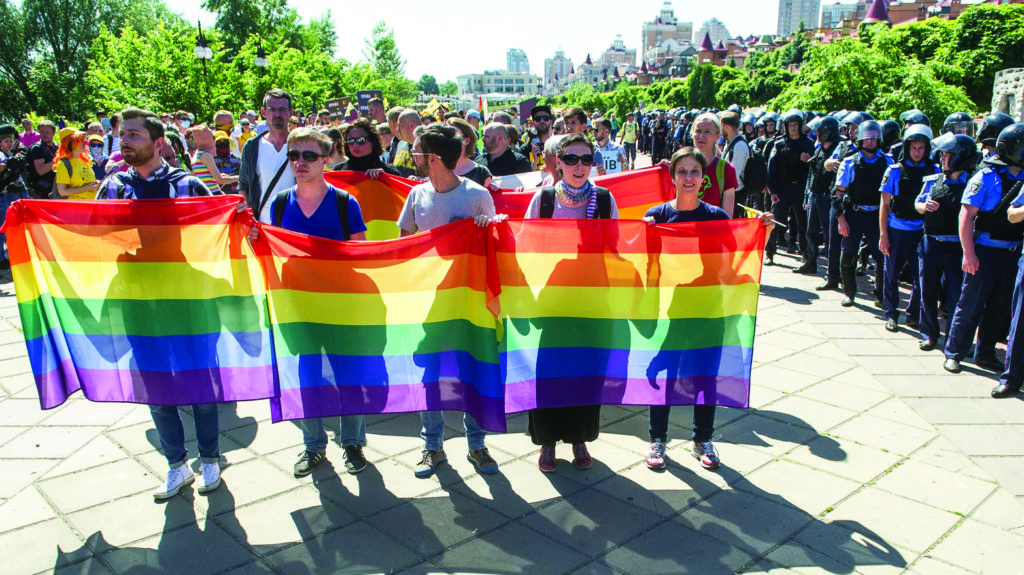 In general, the history of the LGBTQ+ community begins in the second half of the 19th century, where, against the background of the development of left-wing ideologies, the feminist movement and the new science of sexology, the first social activists and homosexual rights advocates began to appear. These people and processes were especially pronounced in Germany. Of course, the rise of the Nazi party changed everything.

Development of the movement continued at a measured pace until the second half of the 20th century, where some lost ground was regained following WWII, with thoughts and ideas spreading across Western Europe and North America. In most modern countries, homosexuality or homosexual activity is not considered a crime. Only in a few states in Africa and Asia – modern Iran, Afghanistan, Saudi Arabia, Yemen, Somalia (Jamaat territory Al-Shabaab), Sudan, Nigeria (northern states) and Mauritania – do homosexuality, manifestations of homosexual activity, or even a hint thereof register as criminal offenses punishable by imprisonment or death.

An interesting fact after the Soviet Union collapsed is that Ukraine became the first post-Soviet country to decriminalise homosexuality in 1991. But as future parade participants will attest, decriminalisation does not mean across-the-board acceptance of civil rights. The Ukrainian LGBTQ+ community as well as those who support the movement say they are still subjects of discrimination and social stigmatisation, which often manifest when applying for a job, in the education and health care systems, and in law enforcement. 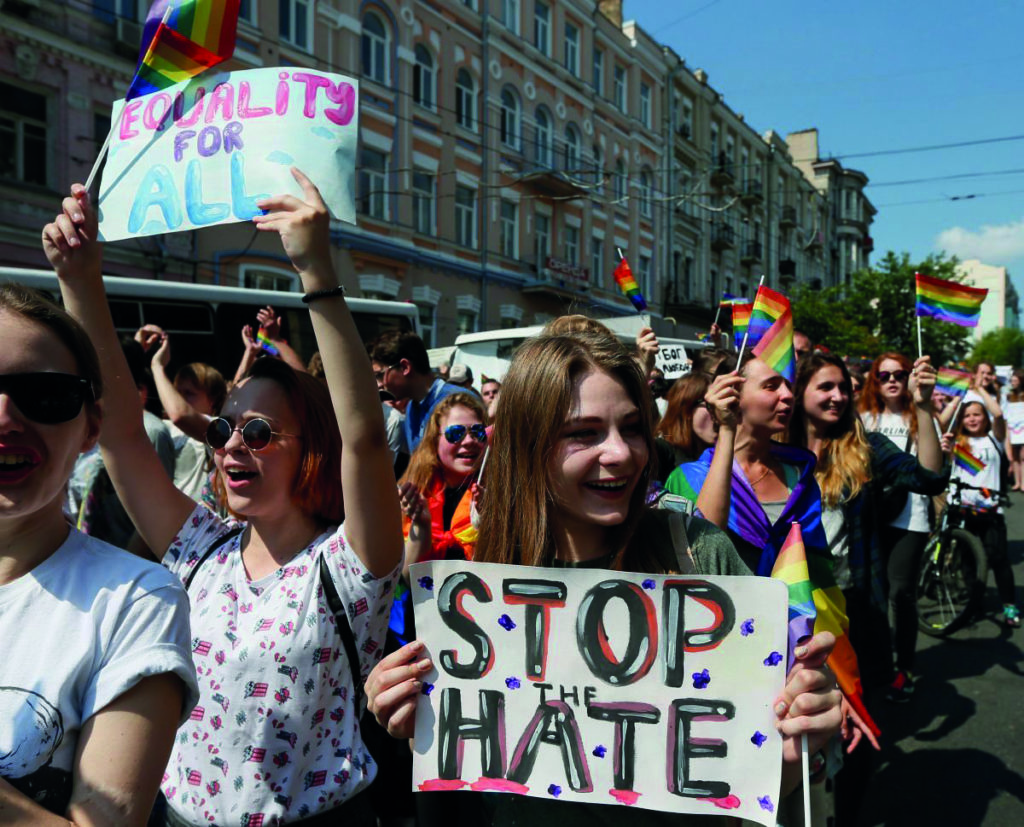 “I decided to support the idea of ​​the parade because I give a damn about my rights, I want to defend them! Fight for them! Yes, I am a representative of the LGBTQ+ community and I want to defend my rights on this,” says one KyivPride 2019 participant, Mikhail S (name changed). Not only can you find a detailed site online in Ukrainian and English, the group has a Facebook and Instagram page that runs year-round. And they are popular. With 12 700+ current subscribers (Insta), the group is gaining momentum, with new followers clicking on daily. Every day, the page posts about their newest supporters, with girls dominating in a 60/40 percentage ratio.

“I do not belong to the LGBTQ+ community, but I have friends who do,” writes Victoria Semenyuchenko on the page. “And I’m just scared for them. They are all extremely talented and good people who find themselves caught in frames.

“To me, the parade is a step towards changing our society, so that all people dear to me have the right and opportunity to find happiness, and not hide or come up with excuses for questions about marriage,” she says.

Among those who support the LGBTQ+ community there is an ATO veteran, Viktor Pilipenko, who came out in 2018. Interestingly, the social network community reacted positively. Of course, Ukrainian stars too are starting to show their support, with famous faces such as actress Olga Sumskaya, singer Zlata Ognevich, singer Luna, performer Piano Boy, TV host Anatoly Anatolich, and band Kadnay all bolstering the movement.

The festival program includes films, a number of discussions, a photo presentation, and exhibitions devoted to the LGBTQ+ community, along with workshops and of course the parade. The March of Equality will take place on 23 June, with an expected 10 000 participants. The venue will not be announced until a week beforehand for safety reasons. If you are interested in taking part, organisers are asking participants to register.

You will then receive detailed information of all particulars, and once you do, we’ll see you on the street waving the rainbow flag, pink triangles, and other symbols of the LGBTQ+ community.