WHAT TO EXPECT IF YOU’VE OVERSTAYED IN UKRAINE

On 30 March, the American Chamber of Commerce in Ukraine in collaboration with the US Embassy in Ukraine and America House had the honour of hosting leading global speaker and executive coach on issues surrounding the professional advancement of women – Rania Anderson. Eighty business leaders, half of whom were men, attended the business lunch, demonstrating their interest in making their businesses more successful through the inclusion of more female leadership. The presentation and exchange resulted in a fruitful discussion and reflection on women in workforce, which then continued into the evening and the following day with a women-only seminar for women in business and entrepreneurs. 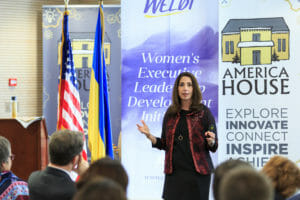 Throughout the weekend, Anderson used her own personal experiences to relate to her audience, starting from questioning gender parity and why it is so critical for successful economic advancement, especially in emerging economies like Ukraine. In fact, research shows that a gender balance in the workplace holds enormous potential for the world’s GDP, and in many places this profound social capital remains yet untapped. This same idea is something Anderson looks at in her book, just recently translated into Ukrainian – Undeterred: The Six Success Habits of Women in Emerging Economies.
The weekend ended well with all participants undoubtedly coming away with a new perspective. What’s On editor Lana Niland had the privilege of attending the seminar and was impressed with the productive and prolific exchange that occurred between many participants throughout the event. “We need to be aware, to engage, and value the achievements” of women, says Anderson, a perspective that includes basic rules which apply to both sexes and requires little investment.
Stay tuned for more great events from ACC.