Better than the Louvre

It’s quite easy to get to Saint Miklosh Castle in Chynadiyovo these days; the door is always open to tourists and travellers.
Some 15 years ago, this castle of the 15th century, once owned by Hungarian nobility, was an abandoned car depot and in total ruin. The current leaseholder of Saint Miklosh, an artist from Mukacheve by the name of Joseph Bartosh, transformed it by some miracle into one of the most popular tourist attractions in Zakarpattya. With an idea for a sort of renaissance, he returned it to its original historic grandeur, combining an open-air space for writers, musicians, and artists and a school of harmonious development. Step-by-step, he brought his project to an international level engaging more and more support from different sources, including the Hungarian und Ukrainian governments.  The beginning was very complicated and there were many obstacles on the way, from no elementary conveniences in the ruined castle to bureaucracy and misunderstanding, and non-acceptance of his motivation. 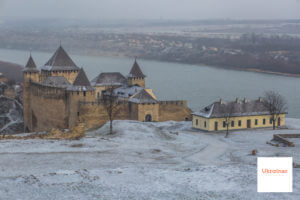 In 2005, Joseph won the right to a lease for 49 years according to the newly adjusted law on preservation of cultural heritage. He is now, proudly, the only successful leaseholder of a castle in Ukraine.
Joseph says, “I was chosen by the castle, it called me and I came… as it has decided just to be”
With restoration work still in process, many volunteers from Ukraine and from abroad come to work on the magnificent structure every year, dedicated to its idea and sympathetic to the essence of its culture and purpose. There are some restored and preserved rooms, halls, and a library, a unique roof, and ancient walls of the historic building which is currently open to visitors. Joseph himself conducts excursions in four languages and welcomes guests.
Various exhibitions, concerts, and festivals take place in the castle. Yet, there are still many plans for development, like a concert hall for classical music and a hall for wedding ceremonies.
Another exciting port of call in Issue 7. Can’t wait? Visit www.ukrainer.net