Kyiv’s left bank – Pozniaky neighborhood, offers accommodation at reasonable prices (for the capital), safety and security, is just some 20 minutes from Ukraine’s largest airport, and, surprisingly for some, features a plethora of indoor and outdoor activities. No longer is this what would have once been termed in local parlance a ‘sleeping district’

Kyiv in tourism terms is a city that is easily digested in two to three days. So, what happens when a tourist has seen it all – the monasteries, the monuments, clubs and museums – but still has time to spend in the Ukrainian capital? If your arrival is via Boryspil Airport, you have definitely driven past Pozniaky, the youngest and most vibrant of left bank neighborhoods.

Off the Well-worn Trail

The two adjacent hoods combine with Poznyiaky to form a larger sub-municipality: POKh (Poznyaky, Osokorky, Kharkivsky), the abbreviation creating a pun. POKh can be roughly translated as “not giving a damn”, which also brings an element of humour. These areas are mostly family-orientated, so you find young couples with kids and Labrador Retrievers – not punks and anarchists. It represents a picture-perfect (and very safe) place, albeit with some ties to the past, as long as you stick close to Bazhana and Hryhorenko avenues, the Kharkivske highway or Sribnokilska Street.

The further you venture into this suburban maze, the transition into smaller streets and lanes becomes more diverse, as street art defines these spaces more and more with a local flavor. Check out the mural for example at Hmyri Street. At sunset in spring and summer (and long into autumn), dozens of teenagers flood this area for extreme cycling, rollerblading, street dancing, or basketball.

As you wander along Hmyri Street, take time to admire the Kolo (The Circle) mural, a slightly disturbing work depicting a person with several pairs of limbs, a sun for a head, and a skull in its hands. Another contemporary example of street art is at Sribnokilska 1, near the My Bookshelf literature café: it is a 3-metre-high profile of a non-binary person. While somewhat controversial in the beginning, these murals are now received positively even by the most conservative neighbours. Almost anything is perceived as better against the tendency of gray conformist-style of the sub-scrapers (wannabe skyscrapers) of a district that was all sand, swamp, and forest only some 20 years ago. Talk about swift development and grand makeover, Dubai-style.

There is a place near Pozniaky, south of Bazhana Pr, that still retains a natural, non-urban flair. The Osokorky lakes ensure the feeling of a village reservoir that is clean and relatively quiet (with the exception of long weekends and national holidays when these sites get pretty crowded).

Designed for People, not Against 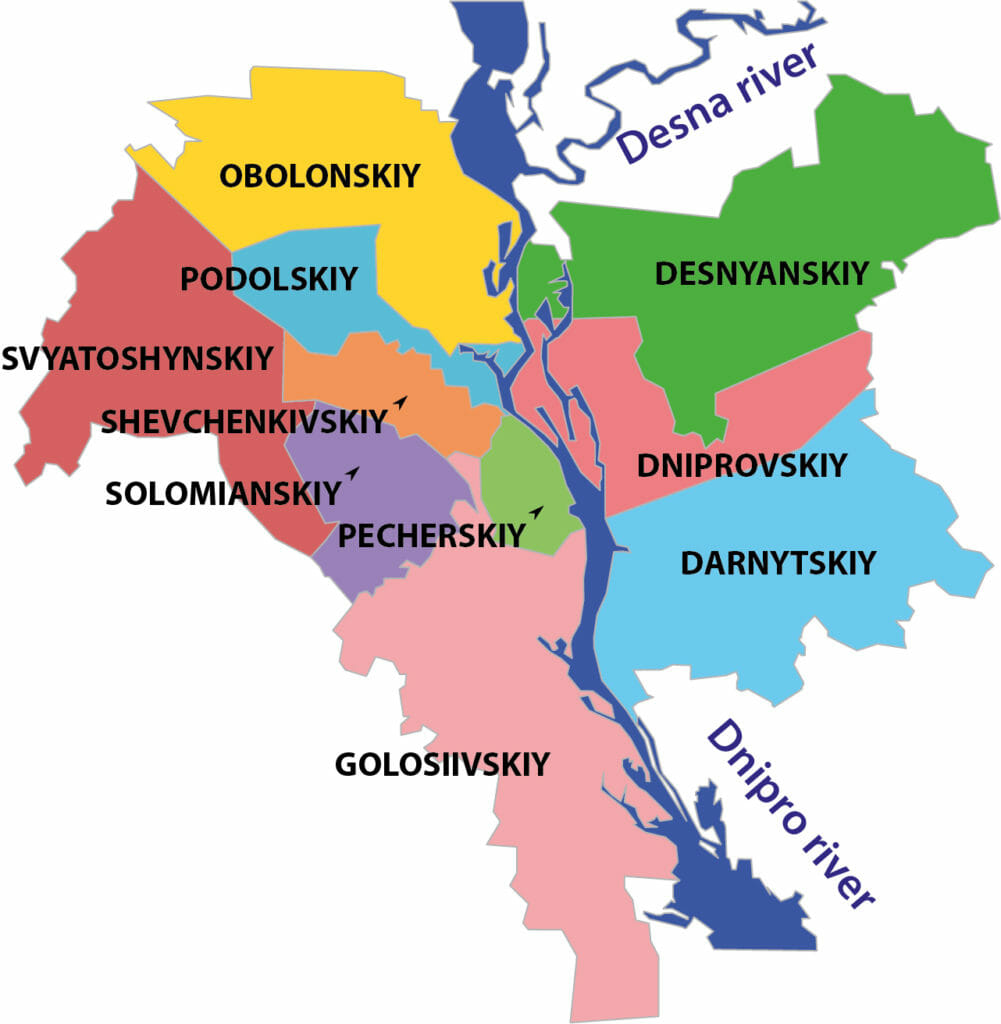 No public space is complete without a monument: take a look at the giant metal pear in Pozniaky Park. Unveiled in 2012, it has been the cause of multiple skin burns since. The reason is the 4-metre-high pear is made of steel, which heats under fierce Ukrainian summer skies. People get a little too close to the fruit depicted for good Instagram pictures, hence the problem.

Around this monument, there is the eponymous Pozniaky Park with a clean well-kept lake and a variety of entertainment options: paddleboat, carousels, ping-pong, a rope park, bicycle and gyro-scooter rental, an occasional piano set up inside a see-through rotunda (yes, we are serious), and a compact wooden church for the faithful. We deliberately mention it because it is the only wooden church on the Left Bank.

For fine wining and dining, visit KuhMeister (Chavdar 36), or Tarelka (Hryshko 9). Though both feature slightly higher-than-average prices (for the area), they also offer ample space to host almost any number of guests. Tarelka (literally, ‘Plate’) is located in a small birch tree garden, hence its popularity in summer. While KuhMeister offers more late night entertainment, with live music and hookah in addition to the menu.

There are two cinemas, at Alladin mall and at New Way mall, and one more pending at River Mall on the Dniprovska riverfront. Down-time spent on the riverbank is never complete without looking to the other side of the river. When you look to the right bank, it is due west, so it follows to marvel at sunsets rather than sunrises. A good spot is on the Southern Bridge. The most convenient way to get there is walking from Slavutych subway station. If you are in no hurry, rent an apartment for several days instead of looking for a hostel, and enjoy the almost hidden perks of one of the most promising neighbourhoods on the oft and wrongly maligned left side of the city.