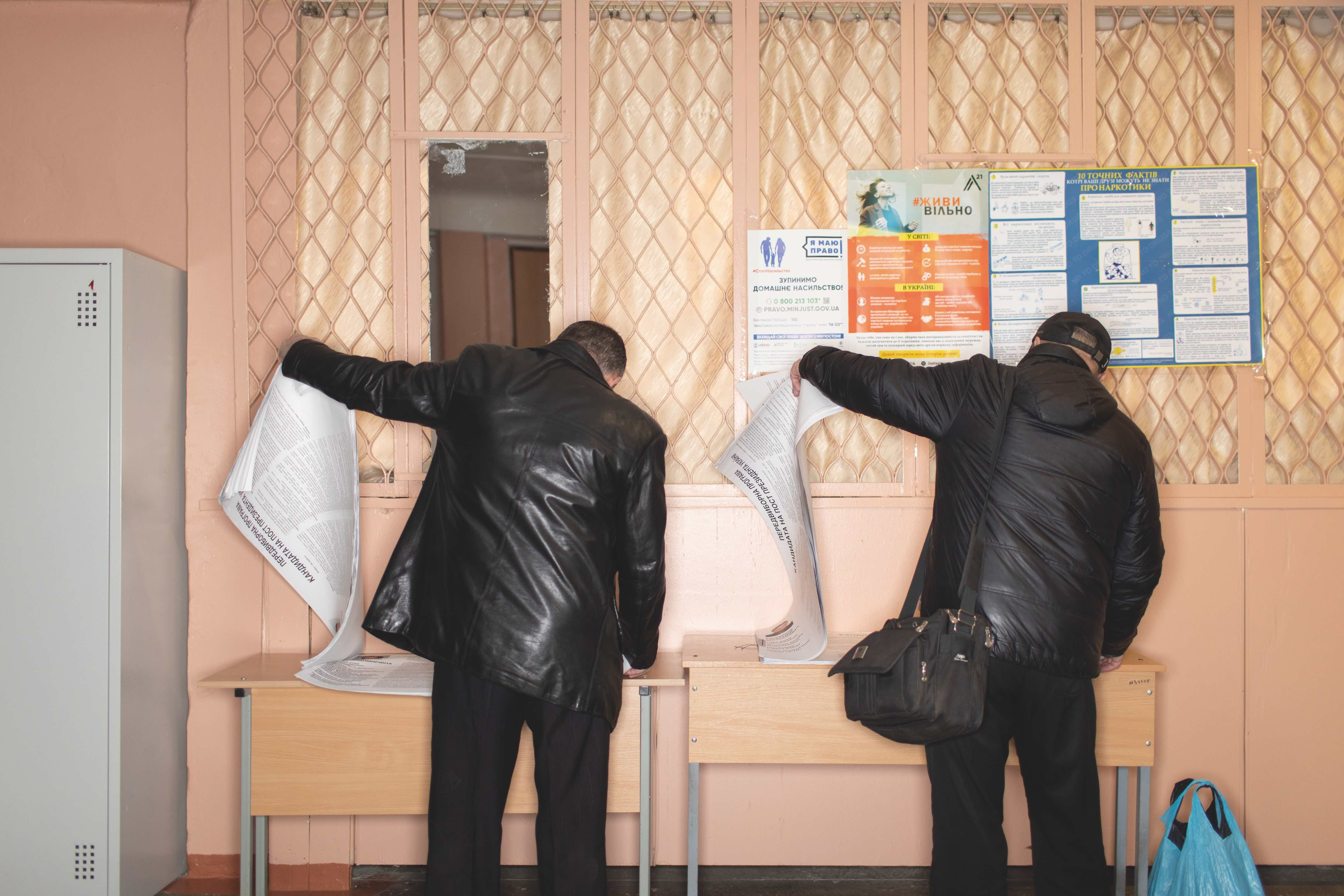 Swiss photojournalist Niels Ackermann has been based in Kyiv since 2015. His coverage of Ukraine is unique and special, capturing the nuances and beauty of everyday life here – which is a stark contrast from the foreign coverage we often see.

In the past few years Niels Ackermann has produced books such as Looking for Lenin and The White Angel. Sharing his personal shots from the presidential election, he explained that as he was not on permanent assignment, he had the time to take a step back and find the shots he wanted to capture. These photos are different from the same images we’ve seen on repeat for the past few months – namely, Zelenskiy celebrating amongst the confetti. Not only do these photos show a behind-thescenes of the theatrical race, they also demonstrate Ukrainian politics at ground level, amongst the people. 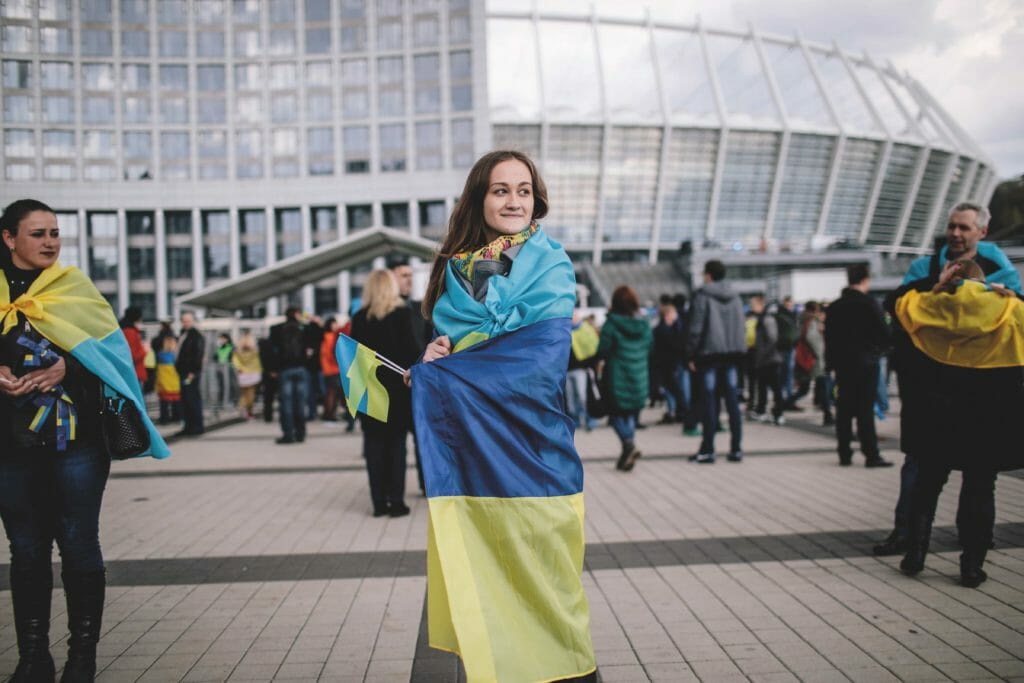 I wanted to know about Ackermann’s journey as a photojournalist, as the ultimate observer of these elections. So, to start, I ask the question which is often a common greeting amongst expats in Kyiv: “What inspired the move and what’s kept you here?”.

Ackermann first visited back in 2009 with an urge to travel east and see if all the stereotypes were true, such as the Lenin statues and the towering brutalist architecture. He reveals that this interest was born out of his love for Swiss Minimalism, and as I watch him slide his laptop out of the most perfectly compartmentalised backpack, I don’t doubt it for a second.

Ackermann fell in love with Ukraine for the warm-hearted people who wanted to share their stories and share their country. In 2015, with his now wife, he made the move to quit his photo agency, found his own (Lundi13), and move to Ukraine. 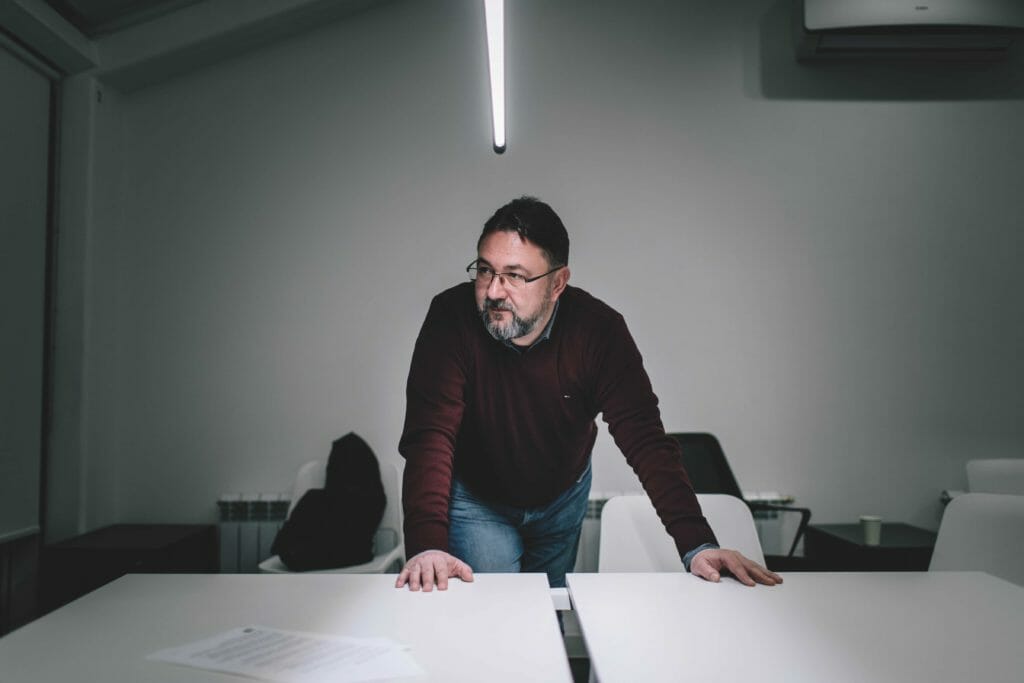 When talking about photography, composition is everything. The arrangement of all components which ultimately brings focus to the subject matter. It goes without saying that Ackermann’s photographs are beautifully composed, but do they reveal something deeper about the elections. Could one call this the composition of the ultimate presidential campaign?

Ackermann tells me that when he covered the elections back in 2009 the mood was completely different to what we witnessed a decade on. In 2009, there was a stale sense of mistrust which had left a heavy apathy looming over the Ukrainian people. “There was nothing fresh to offer,” he says. Leading up to the 2019 elections, experts anticipated this desire for a new figure to replace the old. This freshness was Zelenskiy’s golden ticket, a head start in the political race, without even having to reveal his policies.

The seeming transparency of Zelenskiy’s party, Sluha Narodu, plays a big part in these photographs, and will also have a lot to answer for in the coming months. The party headquarters, where months of meticulous planning took place, are open and airy, partitions are scarce and more often than not the walls are made of glass. In a word, transparent. Not a hiding place in sight. And Ackermann confirms that this was the party’s approach, inviting a photojournalist in with no checks prior or following. These photos were taken in the days following the first round of elections, when the rest of the world’s press had gone home: “This was a moment to breath and find out what was actually happening, a supposedly candid moment with no staging or PR.”

Ackermann admits that this amount of openness from a political party is almost too good to be true. Whilst he was let in with an “impressive level of transparency”, was this proximity actually a case of smoke and mirrors? Was it a mere illusion protecting Zelenskiy himself, who kept away from the press, only giving one interview before being elected? 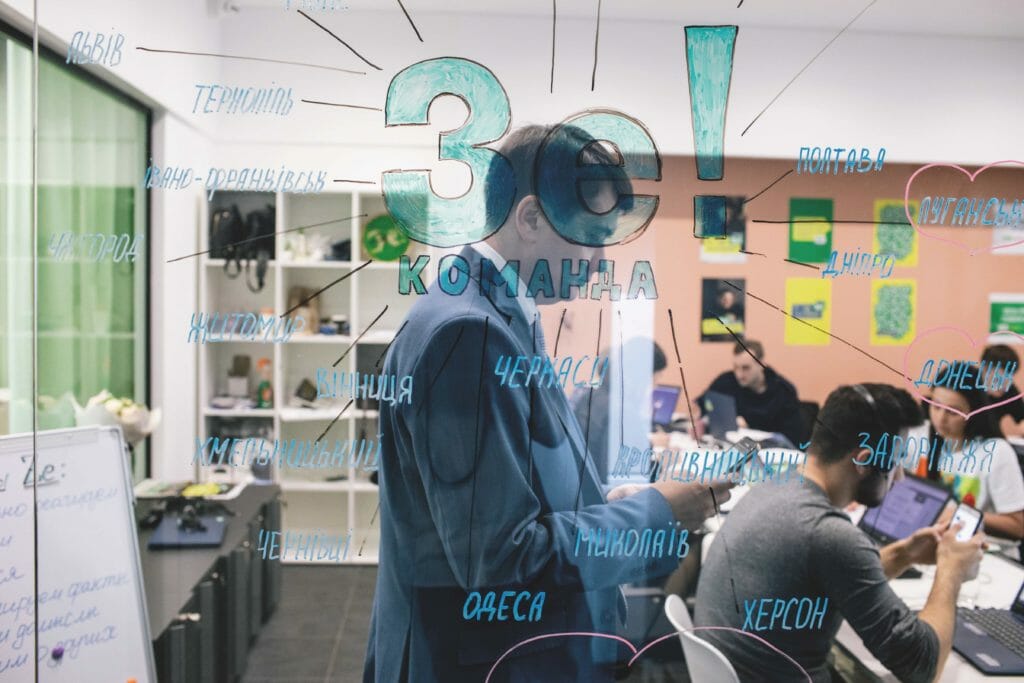 I ask Ackermann if, by documenting the rise of a TV star to the presidency, he ever felt like he was a part of reality imitating fiction. He turns to the image of Zelenskiy surrounded by the cameras and says this is “the epitome of his campaign”. “People seemingly had access to him, proximity, but that access was all planned, staged, and contrived,” he relays. “The transparency only goes so far.” Ackermann managed to take a step back and contextualise the photo, and this is the only way to see the staging and choreography, the crowd of photographers taking the same shot, “the shot journalists frequently need to deliver,” he says. He reflects: “At what point do you know you’re being manipulated?”

Amid the Zelenskiy mania, one can almost forget that it takes two to tango, and by tango I mean have a presidential election. Although Zelenskiy won a landslide victory, Poroshenko had his loyal supporters who turned up to thank him on 22 April, the day after his defeat. Ackermann explains just how symbolic this rally was: this was the first time the streets of the Presidential Administration opened to pedestrians after five years.

“People seemingly had access to him, proximity, but that access was all planned, staged, and contrived. The transparency only goes so far.” 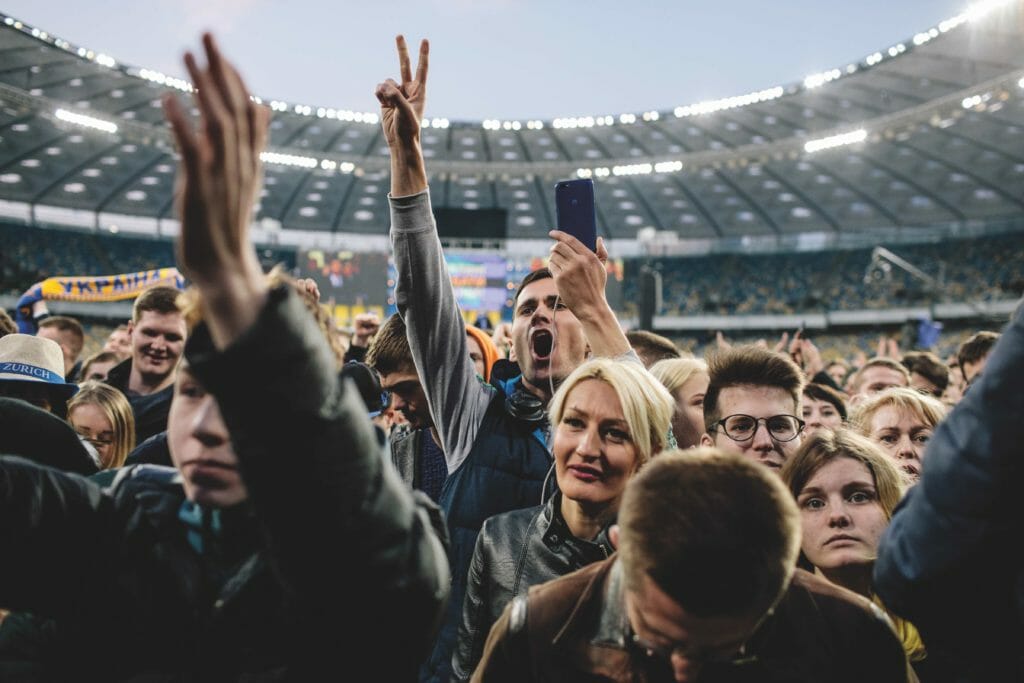 These streets had been closed off from the very people who were giving their lives a few blocks away on Maidan. “Poroshenko opened the gates once everything had fallen, when it was too late,” says Ackermann. There is a photograph that captures Poroshenko stepping out of his “castle” to be on the ground amongst the people, an action he should have taken much sooner to earn the trust he needed. By locking himself away all these years, a rift had grown between Poroshenko and the people. There was a sense of detachment and this distance ultimately led to the nation putting their trust in a man who so boldly claims to be a ‘servant of the people’. 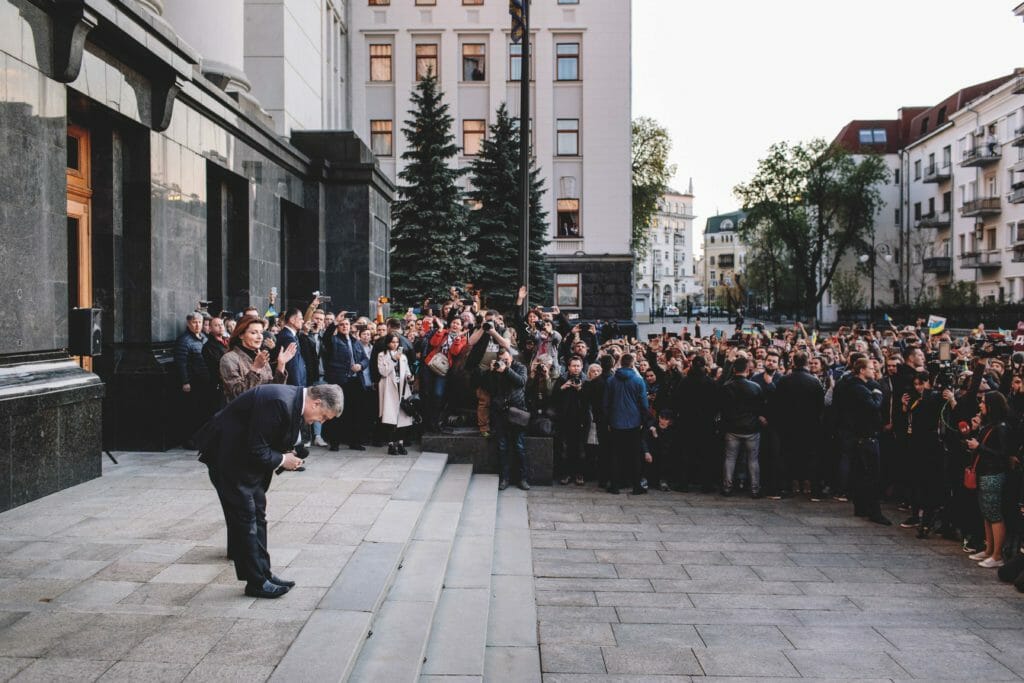 No One Figure for the Future

Ukraine is under a period of transition and the next few months will be telling. Ackermann acknowledges that the media and the Ukrainian people will have to play a role in this transition. For the media, “showing the problems and the scandal is important. But if you don’t balance it by showing solutions and the people looking for them, you simply create mistrust and cynicism,” he says. “By sharing some good examples, the standards can be reset.” Henceforth, the people must reevaluate their urge “to pin all their hopes and dreams on one figure”. For Ackermann it’s all about seeing the world with nuances, “no one is fully bad or fully good. The world isn’t black and white, but rather nuances of grey.”