Timeless and Untimely: The Beach and the Shore

You can’t miss them around the city – but how and why were they introduced?

Kyiv’s so-called MAFs, otherwise described as the small tent-like kiosks located around the city, have always received mixed reviews. Some love them for the quick on-the-go access to products, but most hate them for the eyesore that they are. Generally, these little hut-shaped businesses are not welcomed. But how did Kyiv and other Ukrainian cities end up swamped in a sea of these small architectural forms? Fasten your seatbelts ladies and gentlemen, we are going on a ride in our time machine. 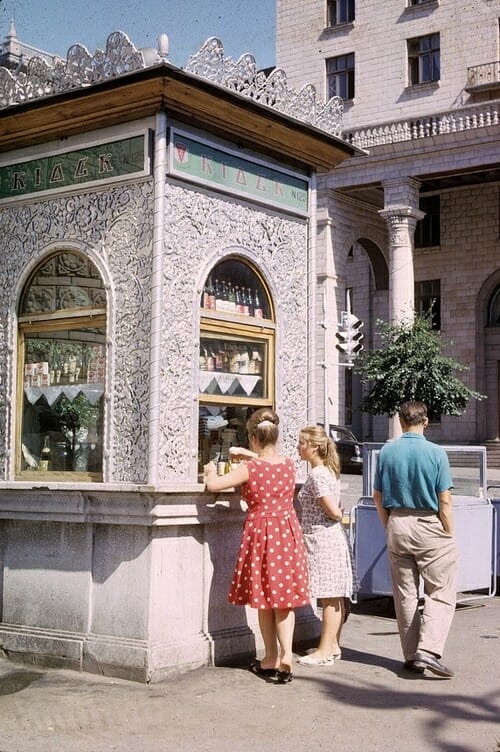 Our journey starts in the time of the Soviet Union – we are strolling along Kyiv’s streets in the 1930s. During this time, small businesses and any sort of private business were illegal, but this doesn’t stop the construction of these small point-of-sale kiosks. When Kyiv became the capital of Ukraine in 1934, the first kiosks started to appear on its streets. They looked decent; the stalls were stylised under the Ukrainian Baroque or Byzantine style, decorated with skilful wood carvings and painted ceramic tiles. It was clear that they knew a thing or two about customer experience. They were inspired by the projects of famous architects such as Pyotr Zakharchenko and Vasily Krichevsky and installed in the most crowded places: opposite the opera house, near the Dynamo stadium, and on Khreshchatyk. The most striking were Krichevsky’s tobacco kiosks, which stood untouched until the 1950s – they didn’t look half bad.

In the ’50s and ’60s, the kiosks were regularly seen with very long lines, due to a high demand in products but a low supply. No one at the time complained because shops that were located on the first floor of nearby buildings often benefited off the large crowds at the kiosks. During the ’70s there was a boom in the number of kiosks due to a rise in demand, and special attention was given to how a kiosk looked and fitted on a street. Here is how not to do it:

You can see how a modern-looking design can seem completely out of place among more decorated, older buildings. However, during these years, a special design for the MAF was developed for Khreshchatyk, which has survived to this day despite numerous renovations of the centre. This intricate design shown below is still standing on Khreshchatyk:

As the Soviet Union was beginning to dissolve during Perestroika, small entrepreneurs jumped at the opportunity to open a Kiosk. The demand for foreign goods was increasing so this became the perfect business venture to tap into this market. However, with the protection from the mafia, the government lost control of these points of sale.

The current mayor of Kyiv has made some efforts to fix the situation but to no significant avail. These days there are so many of them that it’s often a struggle to get on the subway or a bus, having to manoeuvre your way through crowds of people lining up at these kiosks. However, whether you like them or not, it’s obvious that they’ve become a sort of emblem of Kyiv and its cityscape.