Back to the Future

When I was a child, I loved going to the “big stadium”, because that’s where Ukraine’s national teams and Dynamo Kyiv played international games. Upon adulthood, I was selected to be a host speaker for UEFA’s EURO 2012 games in Kyiv and NSK Olimpiyskiy had by then been completely remodelled to become a truly modern highlight of the nation’s capital 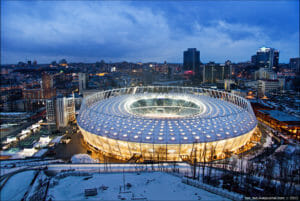 This year, the State Enterprise National Sports Complex Olimpiyskiy (the venue’s official name) is celebrating its 95th anniversary, so I headed over to this legendary place to take a deeper look into its present life and the challenges it has faced.

Many sporting venues, which have been built or remodelled for international tournaments, have a hard time finding a successful business model allowing them to survive and keep afloat. I met with Viktor Anisimov – deputy general director of Olimpiyskiy, who has held this position since Euro 2012 through to today, including during the recent UEFA Champions League 2018 final, who has some interesting stories to tell.

“The Stadium celebrates 95 years this year and before EURO 2012 it was fully refurbished. In spite of the scepticism of many (due to previous experience with stadiums in other countries, where they could not maintain a feasible profit), our current budget allows for 40% sporting activities and 60% on forums, concerts, corporate events, and even weddings,” Anisimov starts out.

He stresses, that it was due to smart segregation of the brand into – not only a “sport” but a “sport and culture complex” that this venue has found success, with some fabulous events, including concerts by Madonna and the Red Hot Chilli Peppers. “We can host big cultural events for any international celebrity. We’ve had such a good start that even our colleagues in Poland, with whom we co-hosted Euro 2012, were happy to take some of our ideas back to Warsaw.” 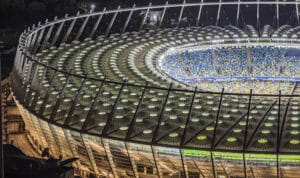 Over its 95-year history, the stadium has many stories to tell from WWII and the Soviet era. It has proudly made it onto the Top 100 stadiums of the world and is ranked #28 among UEFA’s most elite.
Seating capacity: 70 050
Number of stewards during matches:
1 000
Number of CCTV cameras: 390
Concerts: Red Hot Chilli Peppers, Madonna, Depesh Mode, Okean Elzy, and lots more…

Anisimov continues: “One of the creative uses of our stadium for example, was when we hosted ‘Breakfast with the Prime Minister’ during the First Economic Forum in Ukraine. It all took place on the actual turf in the centre of the stadium. Even businessmen from the US were marvelled and surprised by it!”

This is all good and well, but I’m interested in what some of the greatest football teams, like Real Madrid, think of the build and whether they have any unusual requirements. Anisimov replies: “Not really, they love our stadium. It has proved to be very lucky for them. Spain won over Italy in the final of EURO 2012 4-0, and in the 2018 UCL final they won as well.” 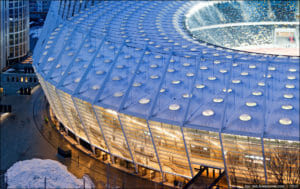 As the stadium ramped up Euro 2012 preparations, a bizarre situation arose… Anisimov picks up the story. “Ukraine was getting ready to host the biggest football tournament in the world at the time. According to procedure, UEFA took full control of the stadium three months prior the games. A few weeks before the start, investigators from the State General Prosecutor’s office arrive and accuse the stadium of hiding dozens of illegal immigrants from China in the basement,” he says laughing. “The officers wanted to shut down the venue to investigate. Needless to say, UEFA was a bit shocked. The ordeal continued for some time and only with help from the President of Ukraine were these accusations put to rest.”

Another unusual occurrence happened this May. Ukraine was getting ready to host another great football event – the 2018 UEFA Champions League final. The stadium had been selected a few years before and several weeks prior to the match, the UEFA delegation reported one of the goals did not meet the organisation’s high standards and demanded it be substituted. Licensed sport equipment providers from England and Germany refused to do the work due to short notice. The story doesn’t end there. One of the Euro 2012 goals, which had been broken by fans on 4 June 2015 following the Ukrainian Cup final, was still in storage. A few Ukrainian ‘jack of all trades’ managed to fix it, satisfying UEFA and allowing it to be set it up just one day before the match.