The Great Gatsby is Kyiv bound! Since its premiere in 2014, 60 000 spectators worldwide have seen this magnificent show. The star-studded cast is amazing – American Dwight Rhoden, an in-demand choreographer of contemporary dance; Konstantin Meladze, a top Ukrainian producer; Yuri Shepeta, Vinnytsia-born and an outstanding composer; Clifford Williams, a principal of the US-based Complexions Contemporary Ballet and, of course, Denis Matvienko, the most highly-awarded Ukrainian dancer. Who are the talents behind this sumptuous production? What’s On finds out before the troupe sets off on a two-year tour across the globe.
What does The Great Gatsby Ballet mean to you?
Alexandr Polevoy (co-producer): The Great Gatsby proves it is possible to bring the best choreographers, composers, and actors together. It’s possible to develop an incredible project within a very difficult timeframe. It is possible to conquer the globe with it. The Great Gatsby is the only large-scale, world-class production made in Ukraine that is second to none either in our country or abroad. History runs in cycles – 100 years ago, Sergey Diaghilev created the Russian Ballet brand. Now we have created the Ukrainian contemporary ballet brand. It is a great honour and responsibility to work for such a project with such participants.
Katerina Kalchenko (soloist, Jordan Baker dancer, leading dancer of the Odesa Opera and Ballet Theatre): To me, it is a story of love, betrayal and hope, which is relevant at any time.
Arthur Gaspar (soloist, dancing Tom Bukenen, ex-member of the Kazaky dance pop group): To me, The Great Gatsby is a family.
What is it about Fitzgerald’s novel that inspired you to create the ballet?
Dwight Rhoden (choreographer): It is a timeless story about loneliness and unrequited love. This aspect of human nature is always interesting to explore.
What makes The Great Gatsby a legend?
Alexey Polevoy (co-producer, brother of Alexandr Polevoy): It requires constant hard work from the entire team. We always look for opportunities to run performances in new cities and countries. Every new challenge is a big risk. Most often, our tours are successful, yet sometimes we make mistakes. The Great Gatsby is a new, and unknown brand for Europe; therefore, every performance is a challenge. We have to convince the public we will treat them to something special. Our first international tours were unprofitable; however, they garnered media attention and critical acclaim. The following year, all tickets were sold out without much advertising.
You are bringing The Great Gatsby to Ukraine for the sixth time. How has your show changed since 2014?
Alexandr Polevoy: Like a living organism, the show evolves, gets better and rids itself of any redundancies. Its creators are a team of perfectionists. Dwight Rhoden introduced a lot of changes and new details in choreography, which have made the performance more expressive from the director’s point of view. Though The Great Gatsby has been on a global tour for a long time, each show is like a premiere for the dancers who perform to their limits and infect the audience with their energy. This is our goal; we want spectators to experience a true spectacle. In 2018, dancers will appear on stage in new costumes that will emphasise the madness and the mores of the 20s.
Has the Ukrainian audience changed during this time?
Alexey Polevoy: Like the production, the audience also changes. Ukrainians have been familiar with classical ballet for a long time. Modern ballet emerged just 10-15 years ago. Therefore, its elements seem non-standard, unusual, yet no less inspiring. People saw The Great Gatsby, applauded Radio & Juliet and Quatro, and appreciated the Complexions Contemporary American Ballet. Considering their enthusiasm, we can say Ukrainians are more than prepared for bold experiments and are open to something new.
Which city gave you the warmest reception?
Rhoden: Vienna and Paris gave us a very warm welcome. We had a wonderful reception in Minsk. Berlin and Geneva greeted us with great enthusiasm and excitement.
Arthur Gaspar: We were very warmly received in Cannes on New Years’ Eve. 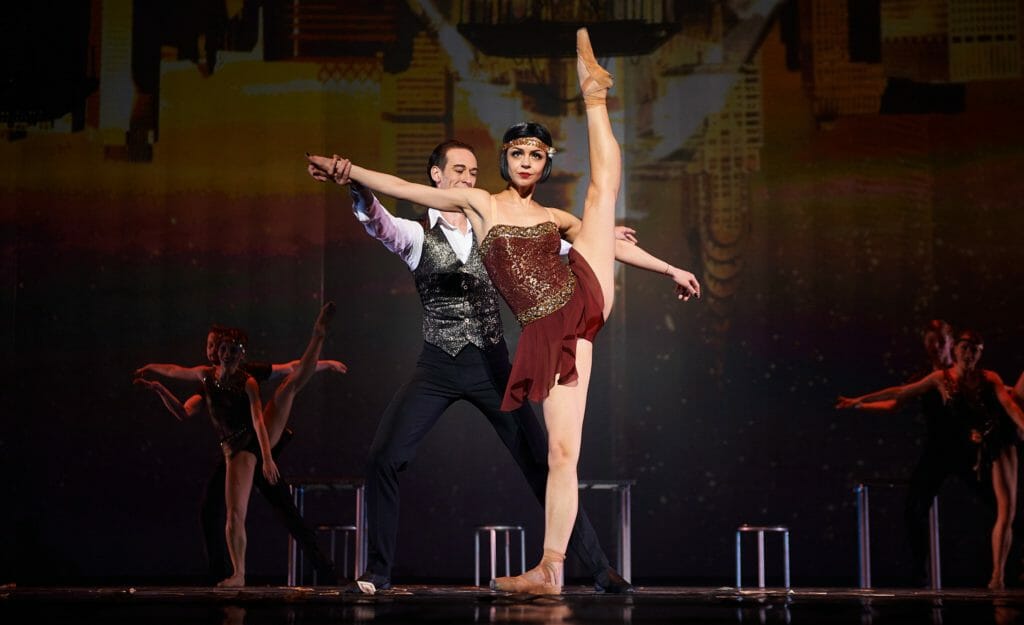 What was the greatest challenge and hardest part of staging The Great Gatsby?
Alexandr Polevoy: Almost a year passed from the initial concept to the premiere. It was quite hard to involve all the stars involved in the project. Casting, rehearsing, composing music took even more time. Denis Matvienko was passionate about this big project. The Great Gatsby was primarily his idea. Konstantin Meladze and Yuri Shepeta for the first time in their career wrote music for a ballet – music that, on the one hand, reflected the spirit of the Gatsby epoch and, on the other, was timeless and very lyrical. Starting the project was not easy, because we had to develop all components from scratch. Rehearsals lasted more than three months, nine hours a day.
What is the funniest thing that ever happened to you while staging The Great Gatsby?
Alexandr Polevoy: A few years ago, we started a tour of the ballet with an orchestra that, as the conductor claimed, had rehearsed for a month, since the score was complicated. However, we found out the orchestra was utterly unprepared two hours prior to the performance. The musicians played something that had nothing to do with the original score. The conductor argued that he, being a professional, knew better than we did. He said the musicians should stop the rehearsal and go home to pick up their tailcoats. We dismissed the orchestra – due to the conductor’s illness, as we later explained to the audience – and run the show with an audio record my brother miraculously happened to have. Not a single ticket was refunded!
What else, besides technique and the right moves, is important for dancing?
Rhoden: Every dancer should be individual and bring their inner world to dancing. In addition to technique, the acting component is crucial. Every performer must inwardly live their parts, as intensely as possible, and display their characters to spectators. Another vital criterion is willingness to work hard and to have a commitment to the project. We strive for global recognition, not just for a local audience.
Do your dancers improvise while performing in front of audiences?
Rhoden: I always give a dancer freedom; I insist that every dancer must be an artist capable of improvising, because this is the highest form of mastery!
Do you plan to stage something huge in future?
Alexandr Polevoy: In November, the American troupe Complexions under Dwight Rodin will come to Ukraine and present Stardust set to music by British rock icon David Bowie. The show was highly praised by critics, the Daily Telegraph and the New York Times. Later in 2018, we plan to demonstrate a classic story in a new interpretation using cutting-edge technology. It marks the debut by a young choreographer and dancer with a worldwide reputation. In addition, we are preparing European tours of Radio & Juliet and Quatro staged by Slovenian choreographer Edward Clug.
Our mission is to make powerful productions in Ukraine, featuring Ukrainian artists and choreographers, and take them abroad. We are able to create values appreciated by the global community. Our mission is to bring the world’s top ballet companies to Ukraine, present contemporary and classical performances here, cultivate good taste in modern society, and form our own, educated, and highly intelligent public.
What is your daily routine?
Katerina Kalchenko: a ballet dancer’s work implies 90% rehearsals. Thus, ballet classes and rehearsals are my daily routine.
What would you like to say to WO readers?
Alexandr Polevoy: We are happy to invite you to our show. It is a must-see!
Alexey Polevoy: Better to see it once than to hear about it 100 times. The ballet won’t return to Ukraine for another two years.