Anyone visiting Ukraine for the first time is guaranteed to ask about Chornobyl and everything to do with it. The topic is so vast that even after reading a stack of great literature, binge-watching TV shows, and visiting museums, you still don’t have the full picture. What’s On draws your attention to one more medium in which to explore the nuclear catastrophe: the video game. Namely, the S.T.A.L.K.E.R. trilogy, which has so strongly blended with Pripyat that the two have become inseparable.

S.T.A.L.K.E.R. is so popular that it is still being talked about a decade after its initial release. What, you might ask, is the secret of its success? The games are classified as ‘first-person shooter survival horror’, but playing S.T.A.L.K.E.R. is so much more than that.

The series is set within an alternative universe, in which the Chornobyl reactor has exploded for a second time. In the wake of the explosion, large numbers of people are drawn to the forbidden nuclear wasteland, forming groups of daring explorers who call themselves ‘stalkers’. When you play, you take control of one of these stalkers. The story takes your attention hostage: you won’t quit until you’ve solved all the mysteries of the Zone and forged connections with the characters who live here. The narrative is immersive and non-linear: with the use of alternative reality, a unique experience is created for each player.

From book to game, via art-house cinema

The world of the game is inspired by the Soviet science fiction novel Roadside Picnic as well as Andrei’s Tarkovsky’s film adaptation (also entitled Stalker). It is an unforgiving, ominous, hostile world – but at the same time, it is curious, rewarding, and engaging. Everywhere you go, you will find anomalies, phenomena that bend the laws of physics, and strange new flora and fauna. The challenges will get your blood pumping as you meet dangerous radioactive mutants and try to avoid the areas of radiation, while trying to save your precious resources. This is also why you need as many allies as possible: allies can open up new paths and plot points, and pave the way to different possible endings. That’s right: as well as the character you’re controlling, you have the power to decide the fate of the characters you meet. This is where the psychological aspect of the narrative hits you: confronted with the grey areas of human morality, you can never be sure which choice is the right one. 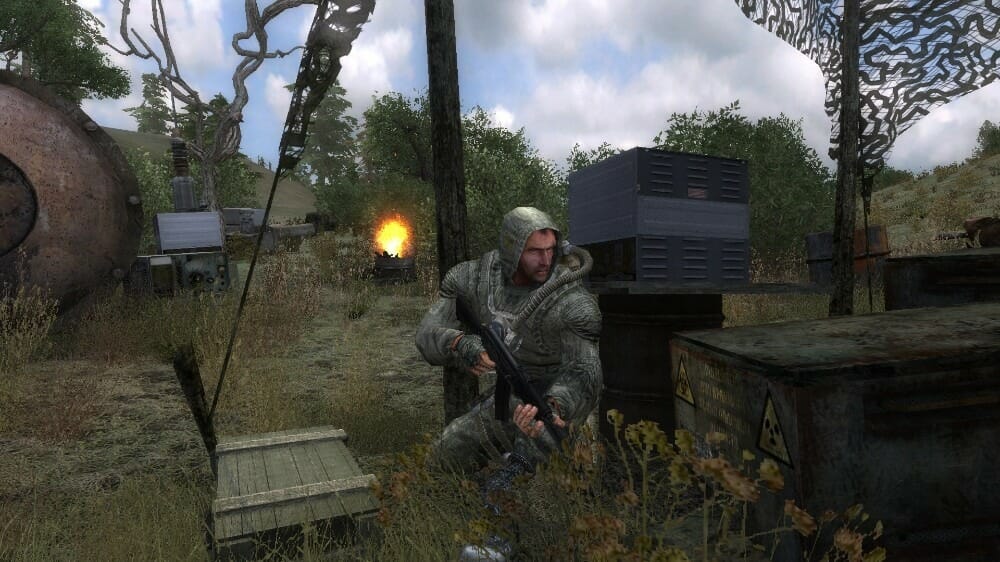 The story started in a Kyiv apartment in 1995, when a small group of developers (some still in their mid-teens) founded GSC Game World. From these modest beginnings, it grew into the most renowned game development company in Ukraine. Three of the core GSC team later set up another Ukrainian company – 4A Games – who made the Metro series, S.T.A.L.K.E.R.’s  spiritual successor. Metro too raises the issues of nuclear weaponry, basic human rights, and the grey areas of morality, but on a larger scale: after the whole world has been destroyed, people find shelter within former metro stations with the hope of rebuilding society and returning to the surface one day in the future. The writing and plotting is equally masterful: before you venture out on each dangerous mission, you’ll find yourself stopping to listen to the fascinating discussions around you.

Ultimately, the draw of these series is very simple: both tell unique stories about everyday people living in an uncanny world. Being in control of the protagonist, you’re even more immersed than when you read a book or watch a film. The creation of this enthralling narrative is a deed that few can attain, and just one more great achievement for the Ukrainian tech industry to be proud of. You can find both S.T.A.L.K.E.R. and Metro on Steam. S.T.A.L.K.E.R. is Windows-only, while Metro is compatible with any contemporary operating system: link

1) The Zone you can explore encompasses roughly 30 square kilometres, featuring a slice of the Chernobyl area that extends south from Chernobyl Nuclear Power Plant. The city itself is directly modelled on its real-life counterpart, albeit smaller in size. In real life, the term ‘stalker’ was used to refer to the scientists and engineers who explored the interior of the Chernobyl sarcophagus after its hasty construction in 1986, while the 30-kilometre Exclusion Zone around the power plant is also known as ‘the Zone’.

2) The ‘stalker’ concept has proved so popular over the years that some people have actually become self-styled ‘stalkers’ in real life, visiting abandoned villages within the Exclusion Zone. Without a guide or official permission, this type of extreme tourism is considered illegal. Indeed, in the game, the abbreviation ‘S.T.A.L.K.E.R.’ stands for ‘Scavengers, Trespassers, Adventurers, Loners, Killers, Explorers, and Robbers’, making it clear that the characters will stop at nothing to access the Zone and its mysteries.