Art and Design at ZLAM Breaks the Boundaries of Ordinary

Tired of bland household decorations or looking for something to spice up a mundane space? Dave Young’s light fixtures will offer an alternative, funky style which is anything but boring.

The Man Behind the Magic

Dave Young is a personality who has evolved during the years he has lived in Kyiv. From the one time clean shaven President of the Kyiv Lions Club, to looking like the character played by Sacha Baron Cohen in the comedy movie The Dictator. Similarly, his business activities have also evolved. Dave is now focused on delivering functional art into people’s living and dining rooms, their staircases, and anywhere else where an interesting conversation piece might be hung.

Lights, or lamps, are functional things but Dave sees them in a different, well, light. He is fascinated by the way different materials can be used to refract light. He currently focuses on oak and fractured glass as his main materials, though there are experiments with resins also underway.

Dave says that it is his mission now to “build a living and evolving display” and when you see the kind of objects he produces you can see the evolution of the light patterns produced by the LEDs that are used in his products. “I love working with animated light patterns and creating the algorithms that produce them,” Young says with enthusiasm

As we look together at the work he has produced to date, 35 finished and sold pieces in all, I realise that maybe the best comparison is to think of is the lava lamps that became hypnotic and common household fixtures in the 70’s. Dave says that he’s heard the comparison before, but with what he’s able to do with a combination of the old materials and the modern heart, his lamps are lava lamps on steroids. 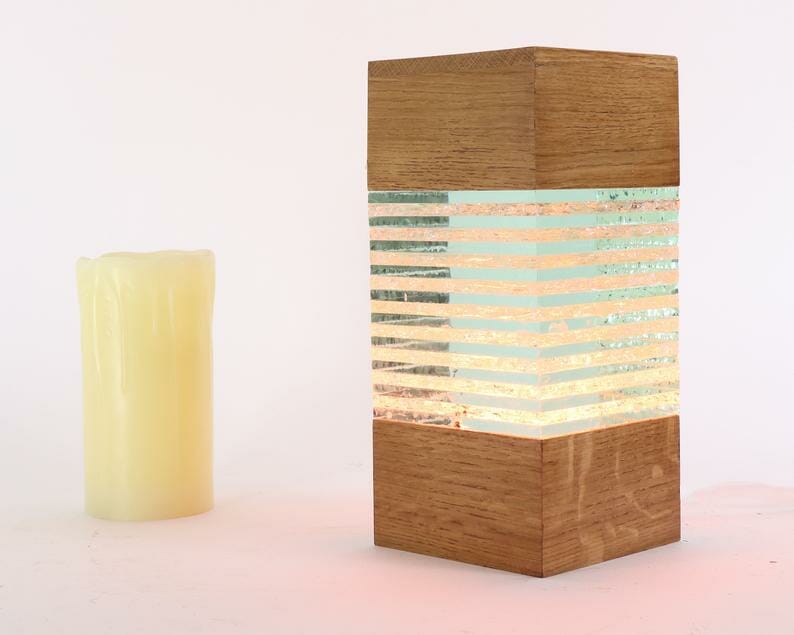 Dave’s tinkering with technology goes back some years when he started ripping old Soviet era phones apart and fitting them with modern phone control panels so that they could take SIM cards and work through modern GSM networks. One day while playing around, a phone base was fitted with 8 handsets each containing a lamp in the earpiece and this medusa-like invention became the inspiration for the lamps that are now made at Dave’s kitchen table. He is moving to a proper workshop soon, “so I can make a proper mess” he says.

As he explains the kind of processes he has been playing around with, it becomes very clear why he needs a dedicated manufacturing space and why his landlady is upset with him. Young explains that in order to create disorder in fractured glass that produces the spectacular effect of his lamps, the glass is heated up to 200 degrees before being plunged into a vat of iced water. It’s a wonder that he hasn’t blown himself, or his apartment, up.

Dave’s next plans are to secure a buyer for a installation of multiple lamps all to go into one location, “like a set of 9, or 20, pendants lighting a grand staircase” he says, if he pulls off something like that off he’s so confident of the impact such a thing would make that he’d even be willing to do it just for the cost of the materials, as long as he gets to use the wow factor for his marketing purposes too. On top of that, there are experiments underway to make the lights dance to music.

The main marketing platform for Voodoomoodoo lamps is the image based social platform Instagram, and the sale of the lamps is handled through the website Etsy,  which specialises in hand-crafted and artisan products. Young says that communicating with customers through these platforms allows the buyers to be a part of watching their unique piece of art (which may cost from just under $300 to over $500 for the larger installations) being born. Or, evolving, just like the man himself.