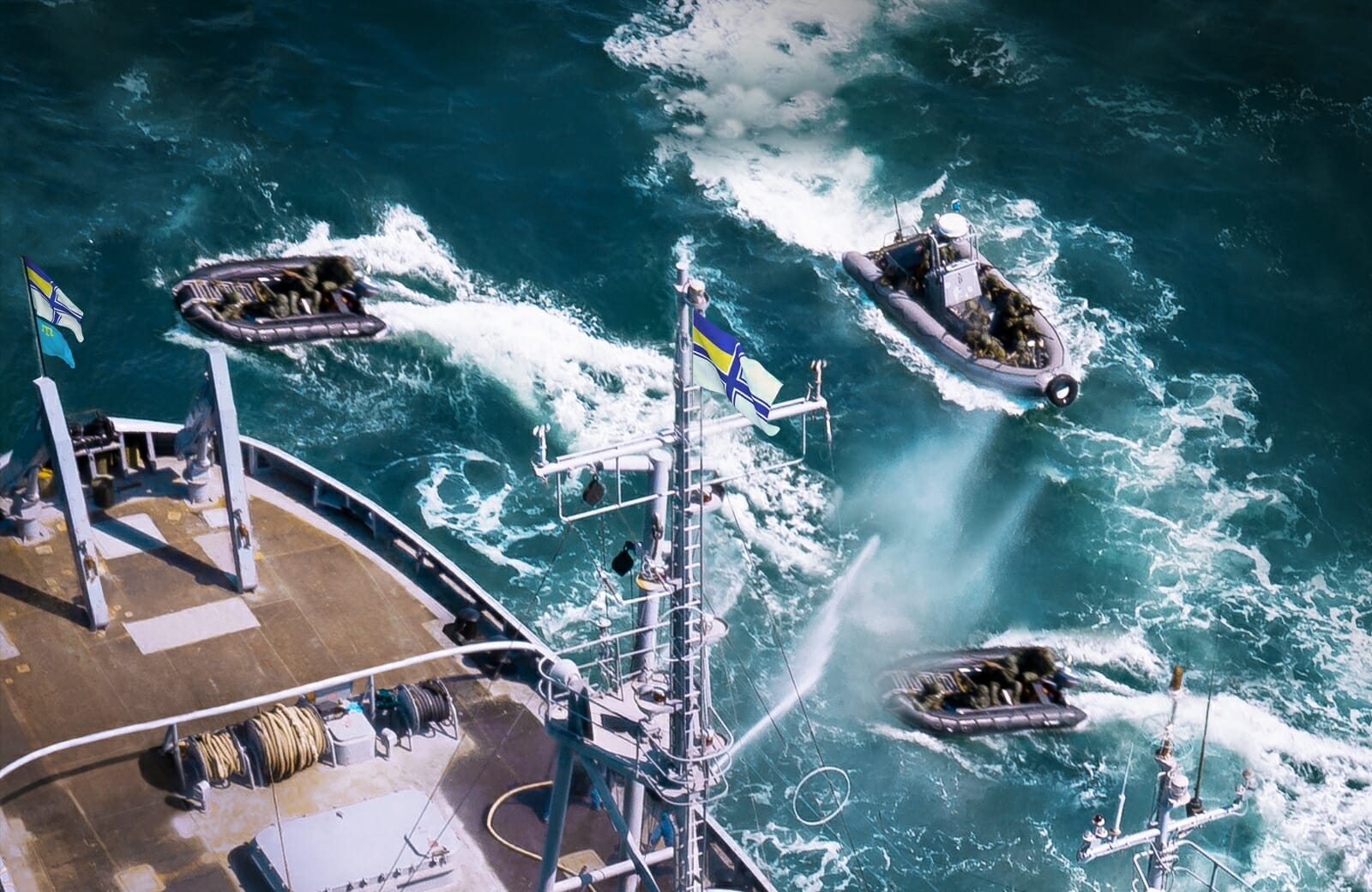 Official posters and theatre teasers claim that Cherkasy is a war drama based on actual events. I say, it is much more than that. It is a personal drama of those forced to witness the outbreak of war. They are caught off-guard. They are scarcely equipped to fight back. They must make a choice.

The plot centres on Ukraine’s minesweeper of the same name. In March 2014, its crew for three weeks courageously resisted ‘green men’ during the Kremlin’s annexation of Crimea.

The Russian troops had already captured the port and sank some of their out-of-service ships to block the narrow exit to the open sea. Twelve Ukrainian battleships surrendered, one after another. All but one… Trapped in Donuzlav Lake (near Yevpatoria), Cherkasy remained the only vessel that kept on flying Ukrainian colours to the end.

Finally, two Russian Mi-35 helicopters and three high-speed boats launched an assault and seized the stubborn sweeper. The operating gear was so damaged, Cherkasy had to be towed to a nearby quay. Even now, she is moored in Russian-occupied Sevastopol.

The crew members went ashore heading for mainland Ukraine. Even then they refused to lower the national flag.

Commander Yuriy Fedash was the last to leave the minesweeper. He was a Cherkasy consultant while the cast included the sailors who had defended the ship.

Cherkasy-born and Warsaw-based Ukrainian director Tymur Yashchenko comments: “It was nice and easy to work side by side with actual mariners – the event participants. It contributed to the film and was useful for me personally. The trick was to understand that they were no actors.”

Filming took place in Ochakiv, Odesa, and a small village in the Chernihiv region. Cherkasy got a lengthy ovation when it premiered at the Odessa Film Festival. In Kyiv, the feature has been ‘on show’ nationwide since late February.

Cherkasy contains three ‘noes’ – no political stance, no propaganda messages, and no patriotic sentiment. Unlike many recent releases, the film maintains a moderate tone and a slow pace, while offering a detached view of the situation.

A ‘no-hype’ movie, it tells its story in a low voice, in plain language, in terse style. Yet it is more eloquent, more dramatic than any big-budget blockbuster with spectacular effects and kitschy speeches.

All characters are presented in a way that feels very true to life. Harsh military service in dire straits, fraught with bullying and hazing, looks believable. The dark restless waters of the sea are as menacing as if heralding a coming storm, an imminent danger.

Lyova and Myshko, two run-of-the-mill village mates and next-door neighbours, may pass for key protagonists. In search of a better world, they join Cherkasy as enlisted sailors. Once aboard, they blend in with other servicemen – cogs in the machine – who share routine labour and, after all, the same fate. They are united and dominated by the minesweeper – a leading actor in the film, as Yashchenko says.

Yet, the cogs matter – small, invisible, and fragile. Everyone matters when it comes down to ultimate values. The motherland is neither a geographical location on Google Maps nor a media buzzword. It is one’s individual notion of integrity and honour.

Roman Semysal (Commander) has had his own war experience since he took part in combat operations in eastern Ukraine. He shares his insights: “Commander’s hardest and most important task was to strike a balance between human dignity and the lives of people. On the one hand, they had to stay loyal to their oath, the motherland, and the ship. On the other hand, Commander had to keep his crew safe.”

Ukrainian mariners fired back yet not pointblank to avoid fatalities and to prevent escalation.

Dmytro Sova (Lyova), remarks: “I hear people say ‘the Cherkasy sailors are no heroes at all’. However, just imagine the absurdity of the situation replete with hidden pitfalls and hidden agendas. The guys were completely abandoned and confined to the ship, facing an enduring challenge. Amidst the chaos and madness, they even surpassed themselves not to capitulate.”

We seem to misuse and overuse the word ‘heroism’ nowadays. Probably, not all real heroes should be that heroic.

Semysal adds, “I sympathise with the Cherkasy crew but I do not consider them heroes. They are people doing their best to remain human. When fighting on the frontline, I did not see a single hero. You’d better not idolise soldiers. War brings out the worst in people, and their animal nature becomes exposed. I am against heroism – it steps forward when professionalism gives way. We should learn how to conduct warfare on a professional level.”

The facts say there were no casualties on both sides. In the movie, the Russian special forces accidently – offhandedly! – shoot Lyova dead as he tries to help unconscious Myshko to his feet and walk him out of the ship.

Back home, Myshko feels out of place. His relatives and friends celebrate his happy return but never mention Lyova – they feast and joke to suppress pervasive fear and anxiety. Myshko sets off on a new journey.

Sova explains: “Lyova is Myshko’s alter ego. They form a single whole. Lyova’s death enables Myshko to be reborn. Transformation often happens when we suffer a grievous loss. If Lyova had survived, no doubt he would have gone off to war the very minute he set foot on soil. He felt so gutted and stressed out, fighting would have been the only way out for him. Myshko took up the baton.”

Semysal adds, “The most sincere, the most vulnerable, the most righteous people die first. This is the essence of war.”

This is the price of war.

Cherkasy does not jump to conclusions. Nor does it make judgements. It reminds us that the war still goes on. The worst thing is that we sort of get accustomed to it…