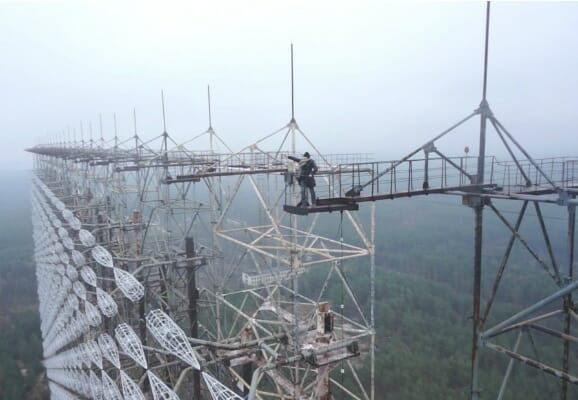 The unspoiled forests north of Kyiv are deceptive. While Chornobyl Reactor Number Four and the ghost city of Pripyat make for a sobering tourist drawcard, the forests also conceal another lesser-known legacy of the Cold War: this is Chornobyl 2, aka the Duga (‘Arc’) radar. The Chornobyl disaster and its aftermath have been thoroughly dissected. The Duga however still keeps its secrets.

During the Cold War, the USSR built what is believed to be an early warning radar system to detect US and NATO ballistic missiles. The Duga radar meant business, towering 150 metres high and stretching almost 700 metres in length. In its 1970s and 80s heyday, the Duga radar was one of the most powerful military tools in the Soviet Union. Anyone in the west with a shortwave radio was familiar with the ‘rat-tat-tat-tat’ pattern of interference which disrupted communications and television signals. The Soviet Union was known to be to blame, and the interference was soon christened ‘the Russian Woodpecker’.
Construction of the Duga began in 1972: Soviet scientists had in mind a massive over-the-horizon radar that could bounce signals off the ionosphere to see incoming missiles over the curvature of the Earth. However, the scientists lacked a full understanding of how the ionosphere works, unknowingly dooming the project to failure.
Operation of the array required as much as 10 million watts. This meant it could drown out transmissions over a wide range of frequencies.

When in 1976 the world heard the eerie pulse for the first time, conspiracy theories followed. In an attempt to filter out the interference, ‘Woodpecker Blankers’ began to be included in the circuitry of radio and television equipment.
The USSR however never officially acknowledged the Duga. To confuse their ‘enemies’, it was shown on maps as a children’s camp. Some speculate that the Chornobyl reactors were built to provide the radar with power: the Duga cost the Soviet Union twice as much as the power plant, despite having questionable military value.
Following the nuclear disaster, the Duga was hastily abandoned; the technology was becoming obsolete and replaced by more accurate satellite-based warning systems. Yet the impressive superstructure remains. The Soviet Union may be dead, but its ghosts continue to haunt Ukraine.

You can still visit the original Russian Woodpecker today, but you’ll need to book in advance with one of the tour companies that operate in the Chernobyl Exclusion Zone.