An eye-opening journey packed with fun!

Have you ever spent a night in a museum or in a castle – how about at the same time? Well, now you have the opportunity to do so! A trip to Radomysl with an overnight stay in its boutique hotel will definitely add to your list of unique Ukrainian experiences and be an adventure you won’t forget.

Radomysl Castle is located in the town of Radomyshl, along the Zhytomer highway, 100 km from Kyiv – it takes an hour and a half to get there by car. When you arrive, you will be delighted to see a majestic, redbrick ‘medieval-style’ edifice proudly perched on a natural basement – a solid granite slab that extends several kilometres into the earth. This architectural gem is cradled in an area covering 2 500 sq. m, between two picturesque waterfalls, the Myka Rivulet, and a lake.

Covered with thick ivy and crowned with a tall bell tower, the Castle sprawls over a charming landscape adorned with numerous plants, isles, bridges, and stone sculptures of angels, warriors, and priests.

In ancient times, the Castle’s location was part of Via Regia –’the King’s Road’ – the oldest and longest transport route between Western and Eastern Europe. 2 000 years ago, Romans developed the network of military roads in Gaul and Germania. By the 13th century, it ran across Spain, France, Belgium, Germany, Poland, Lithuania, Belarus, and Ukraine. In the 10th century, the route included Kyiv and also went beyond – to present-day Radomysl. 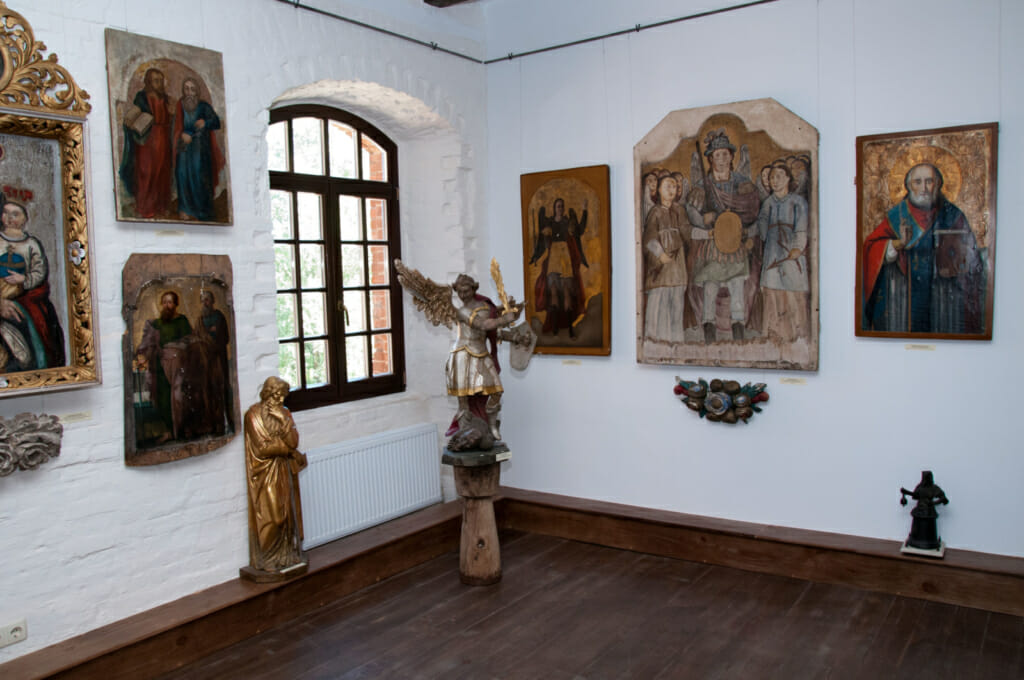 Initially, the site was home to ‘Papirnya’, the first factory in Central Ukraine that produced paper for printing orthodox religious scripts. In 1612, it was founded by the Kyiv-Pechersk Lavra monks, who possessed the surrounding lands, patronized by Archimandrite Eelesey Pletenetsky (1550-1624).

The Radomysl paper flaunted its own watermark, had a tinge of grey and was particularly strong because it contained flax, hemp, and nettle. As early as 1616, it was used for printing Chasoslov – the first book in Kyiv.

The paper factory occupied a building designed as a stronghold, with one-and-a-half metre thick walls. It remained abandoned for a long time until a mill was built on its remains in the early 20th century. In the 1990s, the mill was shut down and transformed into a garbage dump. In the 2000s, it got a new life thanks to the efforts of Olha Bohomolets – an Honoured Doctor of Ukraine, former MP and public figure.

Previously, paper, of course, was made by hand and it took about three months to produce one printed sheet. Now, the Castle revives old traditions and invites tourists to take part in an exciting master class. A guide showcases the manual technologies practised by monks 400 years ago to create paper. The Castle’s paper production line utilises the same equipment that was used in the 18th century.

The Castle’s soul manifests itself in an unmatched collection of Ukrainian icons dating back to the 18th and 19th centuries. It displays more than 5 000 exhibits from all regions of the country – home iconostasis, small iconic pendants, wedding icons, statuettes, Cossack arks, Hutsul folding icons, and artefacts – all carved in stone or wood, painted on wood or glass, or embossed on metal.

It is the only museum of its type in the world, and it is the largest museum of icons in Eastern Europe, as well as the largest Christian-related exposition in Ukraine. Each icon has its own story, sometimes highly dramatic since most of them were miraculously saved from destruction during the years of “militant atheism”.

The homemade Ukrainian icons were created individually to protect and serve families and their specific spiritual needs. The main highlight of the collection is the 12th century stone icon of St. Nicholas The Wonderworker, which preserves the imprints and energy of thousands of human hands. Perhaps that is why it never gets cold, even in winter. Old household items are also on display: chests, chairs, cupboards, writing desks, and utensils. 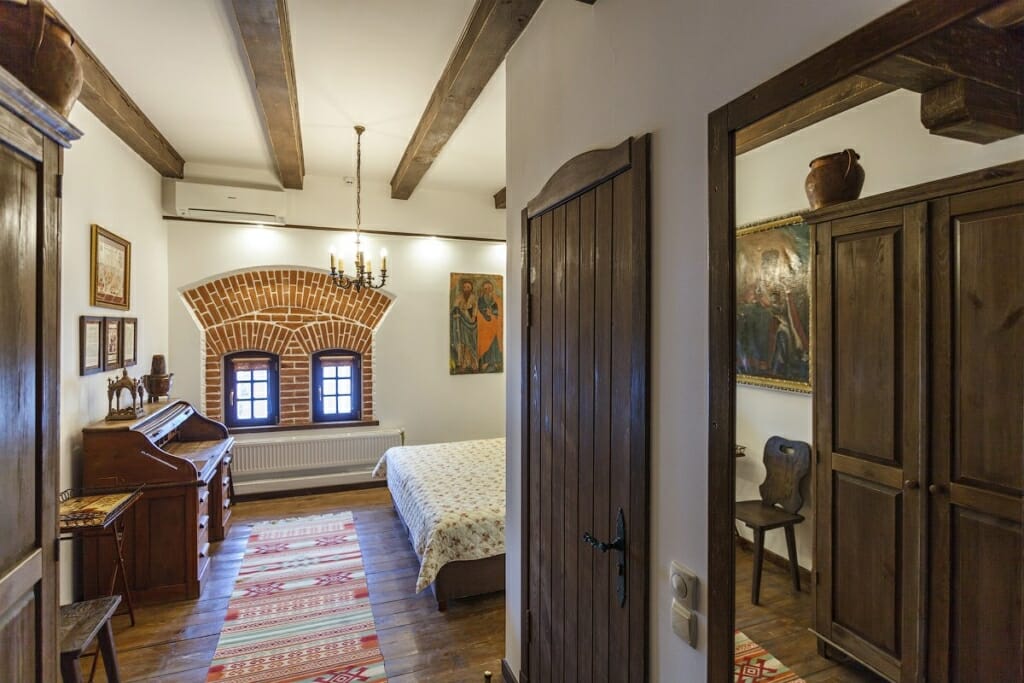 The boutique hotel offers 10 authentic guestrooms, suites, and apartments. Each of them has its own design and bears the name of an illustrious personality associated with the Via Regia countries – Vincenty (Poland), Martynas (Lithuania), Johannes (Germany), Theresa (Spain), Amand (Belgium), Euphrosyne (Belarus), Elizabeth (Norway), Gytha (England), Bernard and Anna (France), and Hetman’s Tower (Ukraine).

The interior is decorated with antiquities; 200-year old wooden furniture and paintings create a comfortable atmosphere, which is paired with modern amenities and a historical flavour. The windows offer magnificent river and park views.

For a better 360-degree perspective, climb up the spiral staircase to reach the sky deck in the bell tower. It is worth your while – the spectacular view will leave you speechless!

The Castle also holds another pearl – a gorgeous concert hall for 150 guests. It meets the highest European acoustic standards, the experts say. Here, chamber music is performed without any amplifying devices, and the sound is delivered in resonating power and clarity.

In addition, the Castle has a basement floor refectory offering national cuisine with affordable prices. The ambience will whet your appetite: low ceilings with oak beams, an oven, long wooden tables and benches, and walls decorated with old geographical and military maps.

p.s. Any decent castle should be haunted. The ghost of a monk is rumoured to dwell in Radomysl. From time to time, he walks about the Papirnya and reads prayers.

The price of bus tickets to Radomysl start from 100 UAH. The trip duration is 1.40 hours

Check the site to book a guest room and excursion