In 988, Ukrainian ancestor’s ruler Volodymyr the Great accepted Christianity and with him everyone else followed suit. The Grand Prince of Kyiv had several reasons for making such a move: to bring about the union to the lands, to centralize the authority and to change the ideology of the people. Those plans would not go hand-in-hand with Paganism, as their traditions included many gods and sacrificial offerings. The knyaz wanted to follow the principle “one nation, one ruler, one god”. Furthermore, accepting Christianity was the fastest way to show Europeans, that you supported their notions, plus new beliefs might lead to better education, culture and a better overall state of the people.
Thus, Volodymyr supported this new religion, returned to Kyiv and gave an order for all Kyivans to come to Dnipro for the ceremony. 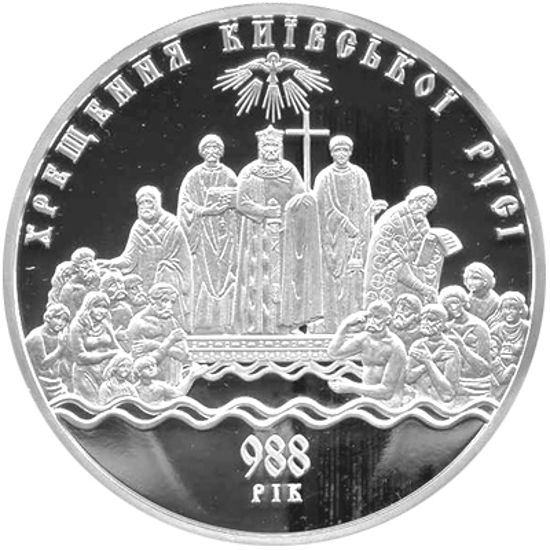 No matter their social status, the people’s refusal would lead to becoming Volodymyr’s enemy. This is a divisive point culture-wise. The new religion was the foreshadowing of prosperity and union within the people and ensured that the cultural aspect was engraved within people’s hearts, but at the same time the process was rather radical and merciless towards those with past views. Many idols and altars were simply crushed and forbidden with a relatively small chance of holding the same importance as before. That is one of the primary reasons why historians are struggling to find previous mentions of people’s way of living, traditions and mindsets. However, some traditions actually made their way into Christianity and smoothly blended into the dominant culture, so it was easier for the nation to undergo such drastic changes.
On 28 July we officially commemorate the immortal spirit of unity that was created 1032 years ago. This date is immortalized within our culture. Just take a look Klavdiy Lebedev’s “The Baptism of Kiyvans” or Viktor Vasnetsov’s “The Baptism of Volodymyr” or the special coins that National Bank of Ukraine carved out.

To top it off there’s also a Saint Volodymyr Monument erected on Volodymyrska Hill in Kyiv near the place of the mass baptism of the Kyiv people. If you are interested in this historic period of Ukraine then we’d highly recommend you to visit the Kyiv History Museum, as there’s a section that is fully devoted to Kyivan Rus. It’s open from 11.00 till 19.00 everyday, except for Monday, which is 11.00 – 16.00. The museum is near the Teatralna metro station. If you’re more of a homebody person, then instead you might be interested in learning a thing or two about The Tale of Bygone Years/the Primary Chronicle as it is the diamond of Kyivan Rus’ history.

The Burning Loins of Love