Save The Ukrainian Carpathians

If you’re in the mood for travel but want to stay covid-safe, then continue reading!

Summertime is high time for travel and recreation. However, due to quarantine, many people are facing the same problem: most destinations abroad are inaccessible, and the most popular resorts in Ukraine are overcrowded. So, to help combat this, we’ve prepared a list of beautiful off-the-beaten-path Ukrainian destinations to travel to this Summer.

Bakota is the location of a submerged historic settlement, named Rus Kingdom, which was flooded in 1981 when the New Dniester Hydroelectric Station was constructed. Before submersion, four villages existed in the valley but were later abandoned as residents were forced to relocate; what remains now is a vast reservoir of water. Nowadays, Bakota is the name of the territory and surroundings of the reservoir, which covers an area of about 1590 hectares. Meteorologists compare the place to Yalta, due to it’s warm and mild microclimate and rocky shores.

In addition to this, Bakota is home to one of the oldest male monasteries in Ukraine. Each year, many visitors travel to Bakota to witness the majestic sight of the massive lake and enjoy the mystical presence of the monastery. St. Michael’s Monastery is located inside one of the cliffs adjacent to the lake at a height of 70 metres. The cliff is part of a steep slope that is called White Mountain, which rises about 130 metres above the lake and is formed from hard Silurian limestone. 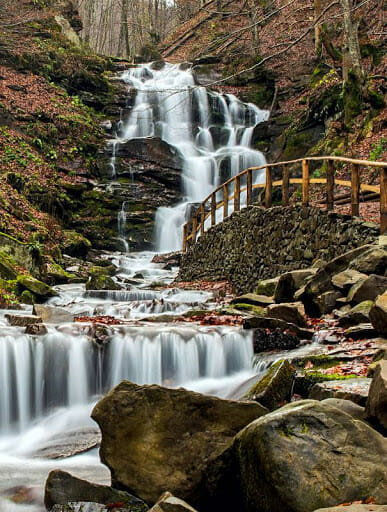 When it comes to the most beautiful places in Ukraine, it’s simply impossible not to mention the Carpathians. Deep within the mountain ranges in the gorge of Pylypets River lies one of the most beautiful waterfalls in the country: the Shipit Waterfall. Each year, thousands of tourists come to see this natural wonder and to enjoy the scenic mountain views. The waterfall is a series of scattered cascades that flow from a height of 14 metres, creating a scenic and mesmerising sight of flowing water. Trust us – your pictures will turn out excellent! What’s more, in July, a festival dedicated to the feast of Ivan Kupala is held here; on this day, a massive fire is lit on the lawn above the waterfall, and people celebrate until the morning. Locals often come to participate in these celebrations and visit the waterfall for a unique experience. 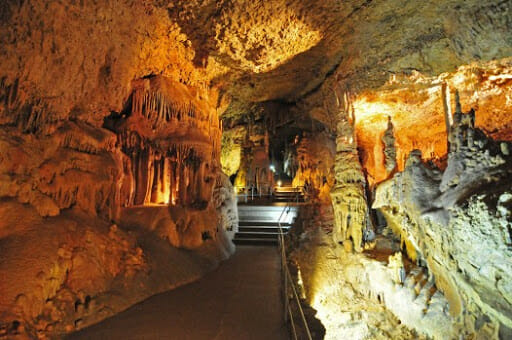 Not far from the village of Korolivka in the Ternopil region is the longest gypsum cave on the planet: the Optimistic Cave. This natural structure was formed as a result of the dissolution of gypsum rocks by groundwater about 14 million years ago. Here, you will be amazed by the beautiful gypsum crystals – which are all of different shapes and colours – and the crystal clear underground lakes that look like mirrors! The temperature of the air in the cave always sits around 9.5 to 10.5 degrees Celsius regardless of the weather conditions outside. An interesting fact: the Optimistic Cave is actually in the Guinness Book of Records; it’s listed as the world’s longest gypsum cave, the longest cave in Eurasia, and the second (after Flint Ridge-Mammoth in the United States) in length among the world’s caves.

Ukraine is a unique and wonderful country with many hidden gems – all you need to do is seek them out!

The Top Thrill-Seeker Activities to Do This Summer