Nestled within the forest, Kyiv’s most famous health resort is a great place for a day out. However, no trip to Puscha-Vodytsia is complete without a foray into its past

Pushcha-Vodytsia is one of the most intriguing places in Kyiv: both a luxurious resort and a place of outstanding natural beauty, with unique sights and a long history. Located on the northwestern outskirts of the capital, on the right bank of the Dnipro, it covers an area of
4 000 hectares and has officially been part of the Obolon district since 2002.

Between forest and river

The origin of the name ‘Pushcha-Vodytsia’ is quite straightforward: pushcha refers to the dense, impenetrable forests, while Vodytsia was the name of the river that flowed here in ancient times. In the 11th century, the princes of Kyiv loved to hunt here, none more so than Volodymyr the Great himself. A little later, in 1571, the territory was mentioned in a letter from the King of Poland, Sigismund II, giving permission to cut down the local forests (where was Greenpeace in 1571?). However, in the centuries that followed, a more responsible system of forestry management was developed in the Pushcha area, while artificial lakes were created nearby, on the Koturka River. 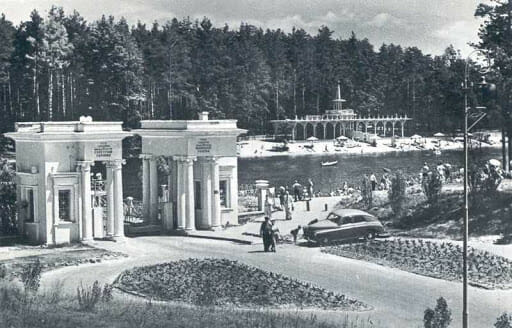 Active development of the area began in the late 1890s on the initiative of Mykola Ivanovych Chokolov, a merchant and member of the Kyiv City Duma. Pushcha gradually turned into a dacha settlement, a kind of garden city. Wealthy citizens rented plots here on a 99-year lease and built wooden dachas, while the land and the forests remained the property of the Kyiv City Duma. Of course, such a luxury as a dacha was only accessible to the upper echelons of Kyiv society: entrepreneurs, government employees, merchants, and intellectuals.

Over time, a fully-fledged infrastructure developed here, which other districts of Kyiv could only dream of at the time: a church, a school, a post office, an outdoor theatre, a park, and even cinemas sprang up here. Pushcha-Vodytsia gained even greater fame when the tram tracks were laid from the city to the resort. The route from Kontraktova Ploshcha – nowadays known as # 12 – is the oldest in the city, as well as the most legendary.

The first tram to Pushcha, in 1900, was steam-powered. Four years later it was replaced by an electric tram. It was not always used by ordinary citizens, day trippers and sanatorium patients: during the First and Second World Wars, the tram delivered fighters to the frontline and brought back the wounded. When there was a shortage of fuel in Kiev for heating, the tram was used to transport much-needed firewood.

A place to heal

Due to the vast expanses of oxygen-producing coniferous forests, a sanatorium for tuberculosis patients was established here in 1903, followed by a sanatorium for children in 1914. The Soviet era saw the further development of Pushcha as a health resort within the city. Most of the hundred-year-old wooden dachas were converted into sanatorium buildings. New medical institutions were also built, including the sanatorium ‘30 years of Soviet Ukraine’, now renamed Pushcha-Ozerna. Since the Russian occupation of Crimea, Pushcha-Ozerna has also been the base of the renowned Artek children’s camp.

These days, Pushcha is a fascinating mix of fading sanatoriums, leisure and education centres, dachas, ordinary homes, and state-of-the-art health facilities, all surrounded by dense greenery. It is also an ideal destination for an early autumn picnic, bike ride, or forest stroll. And while you savour the fresh air and the scent of the pines on your next visit, don’t forget to take a moment to cast your mind back through the reel of images that make up Pushcha-Vodytsia’s rich past.

Events coming up this week