How to Fly With UIA

Have you ever heard about the ghost village that went underwater? Now you have a chance to uncover it on your own.

A tiny island within the Dnipro River is home to an unexpected treasure – a majestic white church with beautiful golden domes. Otherwise known as the Flooded Church of Transfiguration, the monument occupies an area with stunning views and a unique story. Its proximity to Kyiv also makes it the perfect place for a Summer day-trip. So, are you ready to learn more about this mysterious site?

Go Back to the Beginning

It is hard to believe, but once upon a time, the small picturesque village of Husyntsi was sprawled over the area that is now underwater. During the construction of the Kaniv Reservoir in the 1970s, the inhabitants of Husyntsi were relocated, and the small village was submerged. These days, you will not find it on any map – it ceases to exist. Only the taller hills of the area escaped the flooding and subsequently formed small isles; one of them boasts this beautiful temple.

Husyntsi’s principal attraction was the old Holy Transfiguration Church with its bell tower. The church was built in the Ukrainian Baroque style in 1812 (or in 1822, according to other sources) at the commission of the local landowner, Husinsky. The church was built from bricks that were produced at a local factory, and it’s said that workers may have also used eggshells as an additional source to strengthen the cement paste.

For many years, the abandoned shrine remained in a decrepit state, struggling on its own against the elements: the plaster faded, the interior collapsed, the structure suffered from the spring floods, and vandals mocked the images of saints.

Thick weeds covered the lost island, and strange fables started circulating about the place. People rumoured that a loud bell chime would ring from the middle of the river on church holidays. On foggy days, the large structure helped fishers find their way home.

In 2008, the Bohuslav Charitable Foundation initiated the restoration of this architectural gem. The foundation was fixed, the soil level was compacted and raised, and the exterior and interior parts of the domes were restored. A bridge was then built to connect the island with the shore where the Mykolayiv monastery is located. 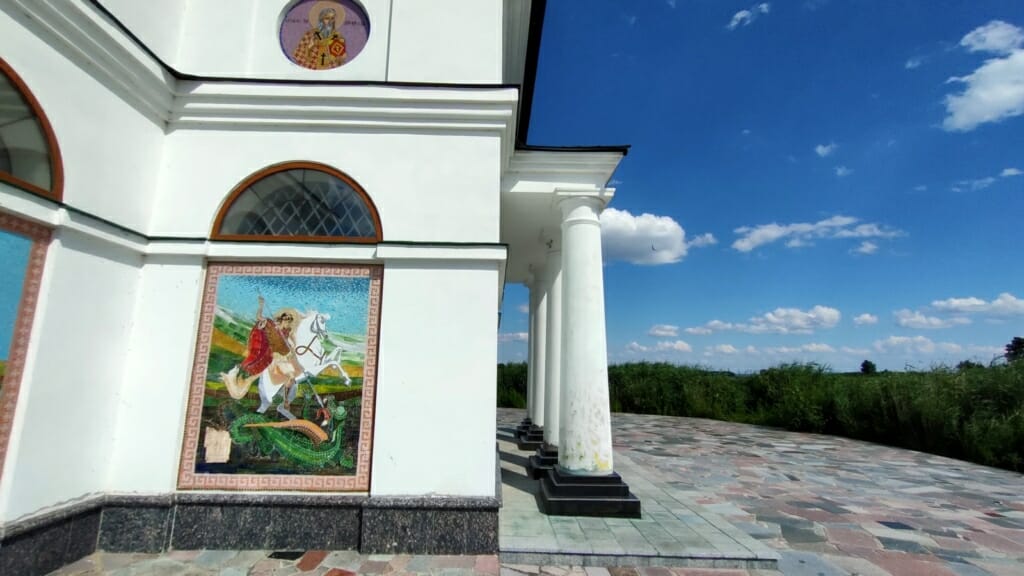 The present-day church offers a feast for the eyes. Its whitewashed exterior walls are adorned with bright, supple, rainbow-coloured mosaics. Some of them are copies of well-known masterpieces, such as Nesterov’s Vision to the Youth Bartholomew.

The interior is simple and elegant, with nothing too ornate. The white walls complement the golden chandelier, candleholders, and wooden furniture. The area around the temple is paved, and the grass is trimmed. A serene and peaceful atmosphere surrounds the place that invites you to relax, take a deep breath, and meditate.

How to Get There

Make a trip to Rzhyshchev, which lies on the banks of the Kaniv Reservoir about 80 km south of Kyiv; it takes approximately 1 hour to get there by car. You can also take a bus departing from the station near the subway Vydubichi.

Once in Rzhyshchev, go to the river quay where you can rent a motorboat going to the island (prices shown below). You will enjoy this little journey while passing by scenic plavni (marshy and reedy banks) and yellow water lilies while you marvel at the mirror-like surface of the river. 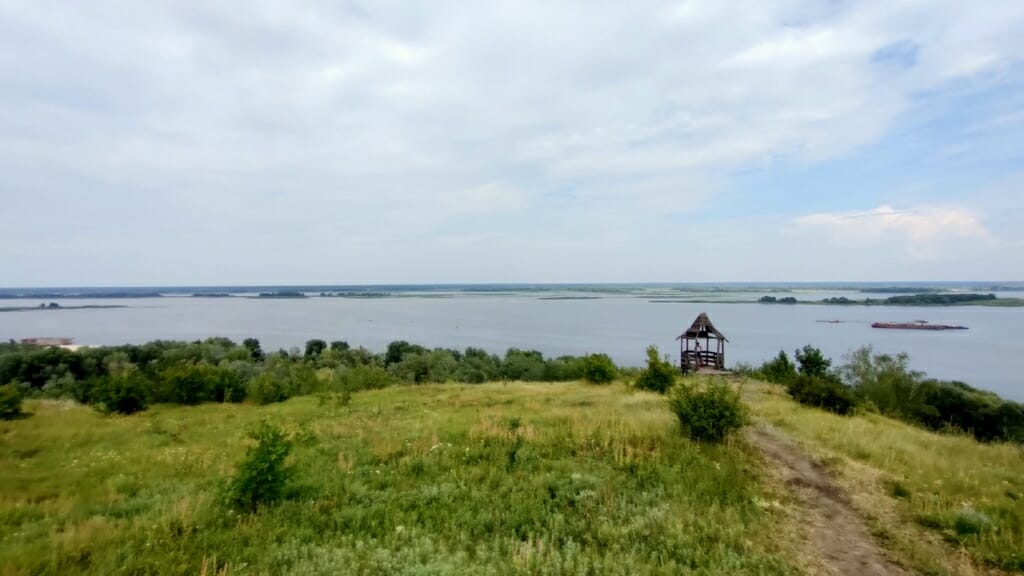 On Your Way Back

In Rzhyshchev, don’t forget to have a nice stroll through this historical town, which claims to be the centre of Trypillia culture. You can savour a bite in the Trypillia Park and attend the Historical and Archaeological Museum.

Afterwards, consider hiking up Krucha – one of the Dnipro hills that overlooks the river – to soak up the ultimate experience, breathtaking views, and some unique perspectives. If you like a challenge, you can also venture up Bald Mountain – a place said to overlook the ‘Island of Witches’. According to Slavic folklore, Bald Mountain is a mysterious place where witches would gather for their sabbath and to practice witchcraft – spooky, right?

For an additional fee, boat captains can also give you a ride to some nearby islands where you can have a picnic with your friends or even stay overnight.

Admission to the church is free

Ukraine is Waiting For You

The Best Hidden Gems to Visit in UA: Churches Around Kyiv Oblast