The most beautiful creations shouldn’t be limited to museums.

A unique Ukrainian start-up is reshaping the destiny of world-known paintings, bringing them into our everyday lives. From scarves to jackets, Zitkani is transforming some of the most renowned impressionist and post-impressionist masterpieces into beautiful clothing pieces.

Launched in September 2019, Zitkani (meaning ‘woven’ in Ukrainian) is a brainchild of Yevhen Bernos and his wife Marusia. Yevhen is an aviation academy graduate and the founder, co-owner, and designer of Bagllet (leather bags and accessories). Marusia is an actress of the well-known DAKH Theatre and a musician of the social rave band TseSho. Yevhen recites: “We attended some festival, and my wife Marusia wanted to acquire a scarf. None of the participants could offer anything appropriate. Options were scarce.” That urged the couple to initiate Zitkani – a brand that makes immortal canvases leap from museum walls and onto delicate fabrics. Zitkani strives to show that “loving and understanding art is so cool”.

Art to Feel, Touch, and Wear

Anthony Van Dyck’s Study Head of a Young Woman, Edgar Dega’s Dancing Class, Il Sodoma’s Christ Presented to the People; the general census is that masterpieces like these belong in museums and have nothing to do with our everyday life. However, Zitkani strives to combat this notion, creating new ways to celebrate these masterpieces, beyond museum exhibitions. Zitkani experiments with styles, putting these famous artistic compositions into new frames: silk scarves.

Each scarf is a masterpiece of colour, patterns, and emotion, celebrating the artist’s vision. Zitakni aims to bring a touch of impressionism to the streets of bustling cities. Each scarf takes you on a tour of some of the biggest names in art: Van Gogh, Degas, and Toulouse-Lautre. The difference is that this time you can look and touch. Bernos explains: “Impressionists and Post-Impressionists were our first choice because their work probably leaves no one indifferent. No certain strategy stands behind our selection – it is just to our liking. Sure, I would like to add prints of my favourite artists’ pictures – Francis Bacon or Rene Magritte – but, unfortunately, the rights to use images of these paintings are very expensive.” Zitkani wants to add Ukrainian names to their collection and promote – in due course – our artists in the world. 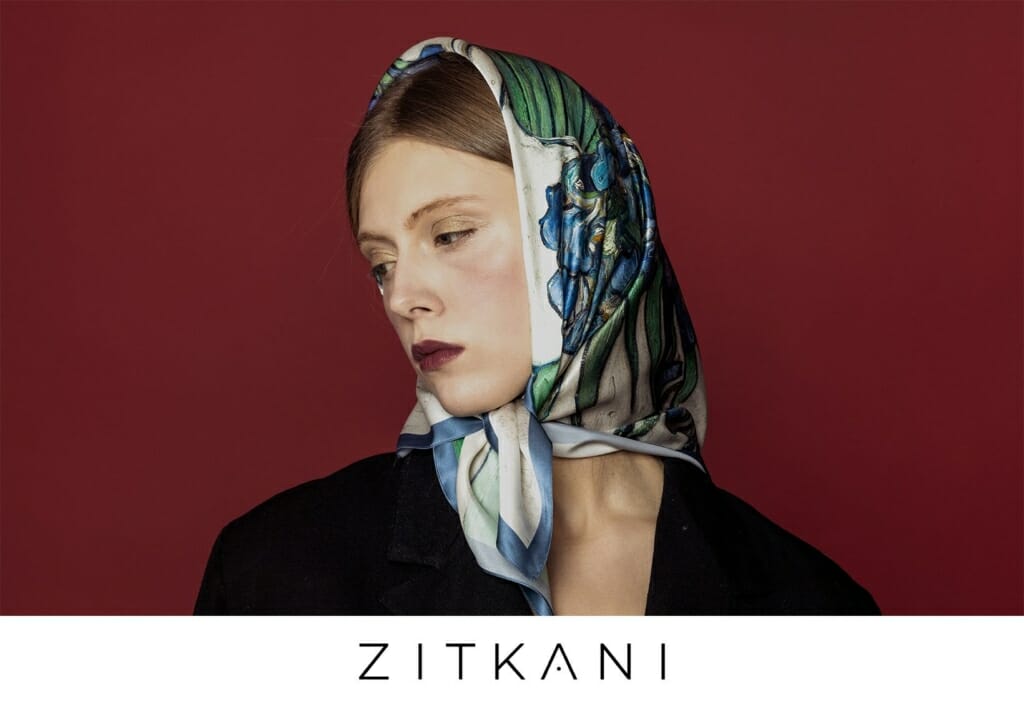 All scarves are made of natural fine Italian silk, so they have a flawless look and are very pleasant to touch. The prints are applied in Ukraine and vary from floral to biblical motifs. With each order, the customer receives a small brochure telling a story about the painter and the meaning behind the painting.

Apart from scarves, Zitkini also offers trendy bomber jackets, and the clothing line might expand in future. “We believe that clothes can be universal for everyone. Therefore, we do not limit our product to gender or age. Both scarves and bombers are unisex. We make one-size bombers. Some customers still find it difficult to get used to, but it is another challenge that only motivates us,” Zitkani says.

Lifestyle media, The Village, L’Officiel, and Na Chasi, have already spotted the start-up project and the Ukrainian brand is starting to earn the hearts of international clientele. Now and then, stylists invite Zitkani to take part in photoshoots for glossy magazines. Bernos says, “A singer from Canada, Shiadanni  ordered two scarves from us, and she is delighted with our product.”

A Look Behind the Artists: 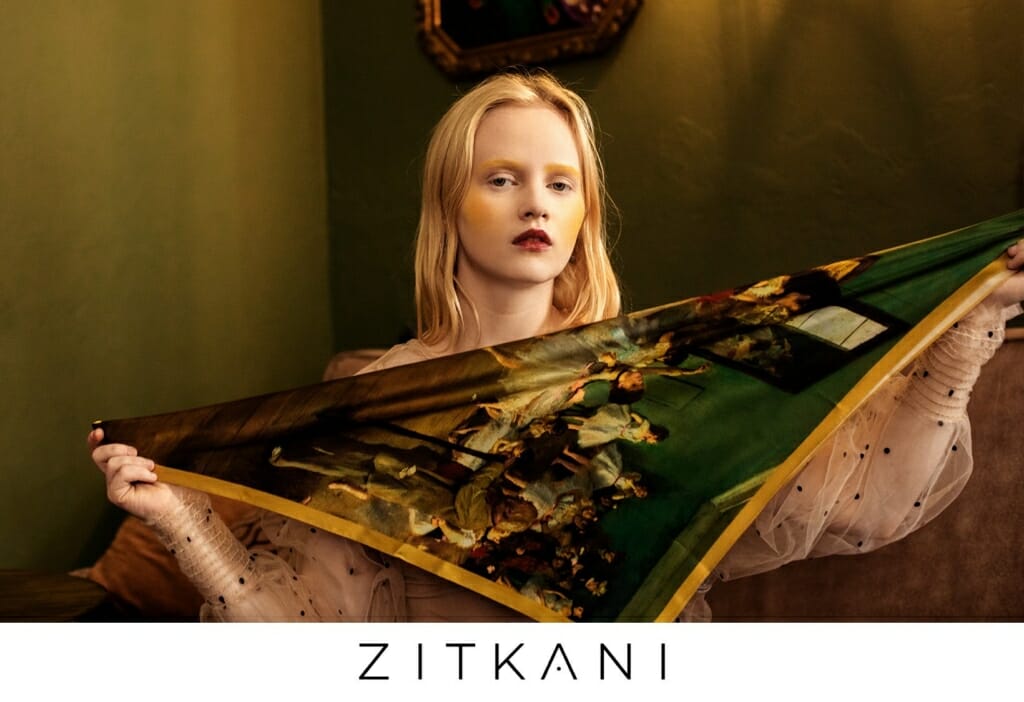 Regarded as one of the founders of Impressionism, Edgar Dega earned himself the nickname “painter of the ballet dancers”. However, his Young Woman with Ibis focuses on an entirely different subject that may seem a bit strange and baffling. Degas created the composition between 1860 and 1862, though he made sketches in his notebook some years earlier while travelling to Rome from 1857 to 1858. Initially, he conceived it as a depiction of a woman contemplating. But, it went beyond this concept when he introduced the mysterious Middle Eastern cityscape, pink flowers, and two bloody red ibises.

Son of a prosperous Antwerp silk (what a coincidence) merchant, Anthony van Dyck, was a Flemish Baroque artist of the 17th century and a prominent figure on the international stage. He also became the leading court painter in England; besides the members of the royal family, he produced a series of excellent Madonnas. Van Dyck concocted at least eight versions of this soul moving image, but the piece Virgin and Child (ca. 1620) is probably the finest and least finished example.

Born into a noble family, Henri de Toulouse-Lautrec suffered from several congenital health issues all his life. A famous French painter and poster artist, he led a Bohemian lifestyle and frequented many urban entertainments of fin-de-siècle Paris – theatres, cabarets, and salons. Between 1880 and 1890 he was particularly drawn to the merry circus theme. His piece At the Circus: The Spanish Walk emerged in 1899 when he underwent alcoholism treatment. During this time, he produced a series of graphite, pastel, and charcoal drawings of circus performers. 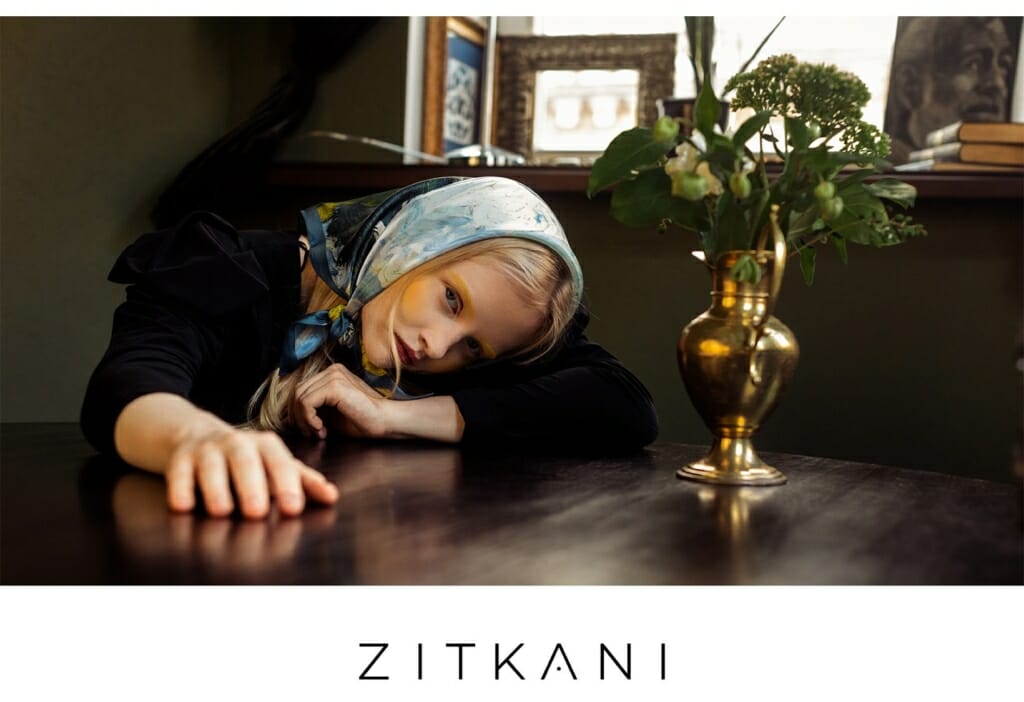 Van Gogh hardly needs an introduction, but of course, his gems Irises and Wheat Field with Cypresses proudly occupy their place in Zitkani’s collection. The Ukrainian brand gives you a chance to feel his captivating art on your skin.

Follow the link to learn more about Zitkani’s assortment